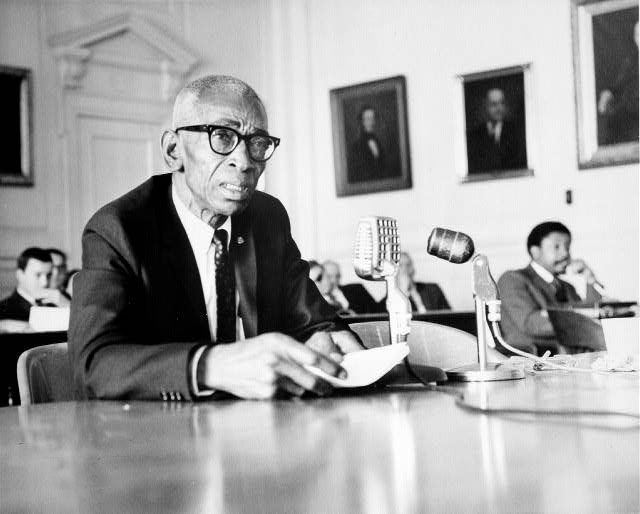 Lucious Christopher “L.C.” Bates was an editor, publisher, civil rights activist, community leader, husband, and inspiration. In 1941, he and his wife, Daisy Bates, started the Arkansas State Press, a publication designed ‘‘to bring about change in society by encouraging blacks to demand equal rights guaranteed by the Constitution.’’ Their desire to begin such a venture couldn’t have come at a better time for blacks, especially in Arkansas.

When the United States decided to enter World War II on Dec. 7, 1941, fewer than 4,000 African Americans were serving in the military. By 1945, more than 1.2 million African Americans were in the service, including thousands of black women. These groups traveled alongside their white counterparts across seas to fight for their country, but they were met with discrimination and segregation, much like what they’d experienced in civilian life.

From 1877 to 1964, the South was governed by Jim Crow laws, rules designed to keep blacks separate from whites. These principles affected almost every facet of everyday life, mandating the segregation of schools, parks, libraries, drinking fountains, restrooms, buses, trains, and restaurants. The implementation of these rules ensured that blacks remained disenfranchised, inferior, and unequal to whites.

When black soldiers returned home from war, rather than being honored and celebrated for putting their lives on the line, they were instructed to abide by the rules of Jim Crow.

Due to issues like this, Bates saw his newspaper, the State Press, as a tool to enhance communication between the races and, thus, improve conditions for blacks. As editor of the weekly paper, he made sure to speak up about events and occurrences within the black community that were unjust and deserved to be brought to light. He was honest, open, and forthright in his approach, making statements that no one else seemed to have the courage to communicate.

Throughout the course of the State Press’ run, Bates allowed nothing to stop him from saying what needed to be said, especially concerning the education of future black leaders. Bates and many others in his community understood that separate schools didn’t equate to equal education for blacks, so he and surrounding leaders, including those of the National Association for the Advancement of Colored People, began advocating for improvements in black schools, along with economic opportunities.

Brown v. Board of Education

In May 1954, after nearly two years of discourse and analysis, the Brown v. Board of Education decision was passed down by the United States Supreme Court, declaring state laws that established separate public schools for whites and blacks as unconstitutional. Although excited by the news, Bates knew that this decision would ruffle the feathers of his Southern, white counterparts, so he prepared the black community by using the paper to express the stance they should take for what was about to come. Not everyone in the black community agreed with this decision, as they felt changes were occurring too fast, which would result in a backlash of the whites, but Bates was more than prepared for the fight.

In the days, weeks, months, and years following the court’s decision, the Bates couple took on the role of foot soldiers to ensure that the ruling was acknowledged and put into action as soon as possible. While L.C. continued to keep the community abreast of their progress through the paper, Daisy hit the ground running and took on the role as the community’s spokesperson for the issue. This was during a time when women were routinely stationed in the background.

Once a group of black students were selected and permitted to attend an all-white high school in Little Rock, Daisy served as the mentor to the students, who later became known as the Little Rock Nine. The Little Rock Central High School crisis received international attention due to the unruly treatment and pure hatred spewed by a mob of white people toward the black children. As their spokesperson, Daisy received just as much attention as the children, so her legacy was eminent and her role in the story remained in the spotlight for many years to follow. Since then, she has been the topic of several documentaries, articles, novels, and celebrations.

Celebrating the legacy of the man behind the curtain

Today, we continue to celebrate Daisy Bates, but we also want to show appreciation for her better half; the brains behind the State Press and the force that helped to mold and push her to become the legacy that she became. L. C. Bates was a phenomenal leader in more ways than one. He established a publication that served as the largest African-American owned newspaper in Arkansas throughout its existence, he played a large role in the successful fight that gave African Americans the right to vote in the Arkansas Democratic Party, and he helped to lead the charge in the integration of Central High School. L. C. Bates was truly an inspiration with a legacy that deserves to be shared with the masses.