The History of Little Rock and the Freedom Riders 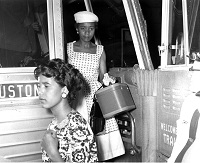 When they arrived at the Mid-West Trailways bus station at Markham and Louisiana Streets, a crowd of 300-400 people watched as the five Freedom Riders were arrested. A crowd of people, still reeling from the 1957 Central High School Crisis, were ready for a confrontation. Despite efforts by a group of leading Little Rock businessmen urging calm, the city police chief declined to disburse the crowd and instead arrested the riders. They were later released from jail and continued their journey to New Orleans.

The Freedom Rides led to the desegregation of bus terminal facilities in Little Rock and other cities by order of the Interstate Commerce Commission (ICC) on November 1, 1961.

On July 9-10, 2011, another crowd assembled due to the Freedom Riders, but this time it was to celebrate their bravery and commemorate the 50th

Anniversary of the Freedom Riders coming to Little Rock to desegregate the Trailways Bus Terminal.

This anniversary was the perfect event to launch the Institute on Race and Ethnicity since the institute is charged with continuing the work of the Civil Rights Movement by researching the racial divide in Arkansas and working with others in the state to promote racial and ethnic justice.