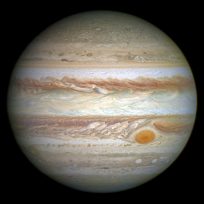 On June 10th, Jupiter, the largest planet in the solar system and the 5th world from the Sun, will be at opposition. Opposition simply means that, on this evening, the planet lies opposite the Sun in our sky. If you were in a spaceship looking “down” upon the solar system you would see an alignment like this: Sun->Earth->Jupiter. Whenever an outer planet is at opposition, it will rise at sunset, reach its maximum altitude above the horizon around midnight, and then set around sunrise. Opposition is also right around the time that the planet is closest to Earth so it will appear at its best for telescope observations. 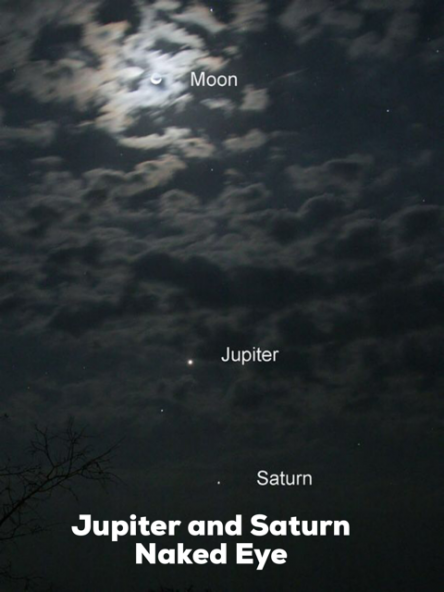 A small telescope will reveal some of Jupiter’s most iconic features, the parallel dark and light bands that form in its thick cloud layers which are composed of 90% hydrogen, 10% helium and a smattering of methane, sulfur, ammonia and water vapor.   The planet’s spin rate of 9 hours and 56 minutes generates strong jet streams with wind speeds upwards of 400 mph within the gaseous atmosphere. It is a combination of the fast spin rate, high wind speeds, and convection currents welling up from the interior that have shaped these complex features within the Jovian atmosphere. The dark bands are known as belts and represent cooler material sinking back down into the atmosphere while the lighter bands are known as zones and represent warmer material rising up from below. The red, pink, and brown color of the belts is probably produced by irradiated phosphorus compounds, while the lighter zones are the result of ammonia crystals masking the colorful gases below. In truth, we still aren’t exactly sure how these colors are produced. In a backyard telescope, you are most likely to see the two, dark North and South Equatorial Belts that parallel the planet’s equator. 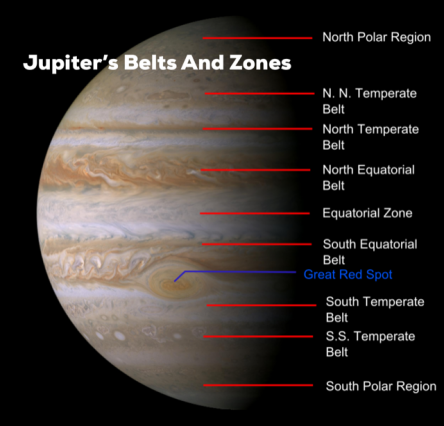 Aside from the belts and zones, perhaps Jupiter’s most iconic feature is the Great Red Spot, a giant anticyclone twice as big as the Earth with wind speeds that range from 270 to 425 MPH. Not only is the Great Red Spot remarkable for its size and appearance, it is also remarkable for its longevity.   It may have been churning in the Jovian atmosphere for some 350 years, but we aren’t sure if those early accounts were actually observations of the present storm or a different one altogether. However, we do know that, due to continuous monitoring, that this current storm has been raging since 1830. Why do storms on Jupiter persist for so long?  Well, Jupiter has no land masses, it’s all gas. On Earth, large storms such as hurricanes will lose energy from friction once they encounter solid ground.

HOW TO SEE THE GREAT RED SPOT 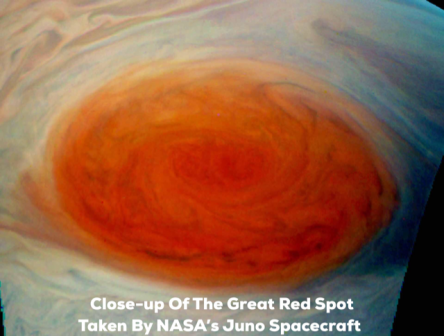 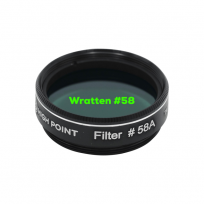 To see the Great Red Spot, you will need a telescope with at least 6” of aperture.   A Wratten #58 green filter can be helpful in bringing out the cloud belts and the GRS.

Because Jupiter is constantly spinning at a rather fast rate, you will need to know when the GRS is transiting the meridian of the planet (when it will be facing towards the Earth). An easy way to obtain this valuable piece of information is to visit Sky & Telescope’s Great Red Spot Transit Calculator page: https://www.skyandtelescope.com/observing/interactive-sky-watching-tools/transit-times-of-jupiters-great-red-spot/ 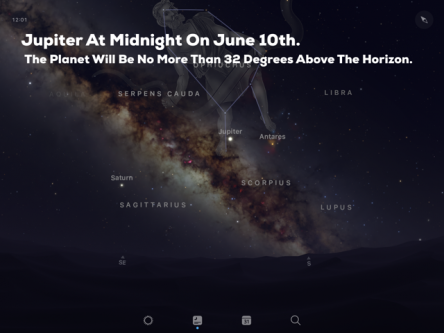 Now for some bad news. This year’s appearance of Jupiter is hampered by the fact that it is fairly low in the sky. Whenever you look at a planet low in the sky, you are having to look through a thicker layer of the Earth’s atmosphere, which can distort your telescope image. My advice for this month is to wait until around midnight when Jupiter is at its highest point above the southern horizon to begin your telescope observations. Also, always give your scope at least 30 minutes for the optics to cool down and adjust to the ambient temperature.

IS THE RED SPOT DISAPPEARING?

While the GRS has been around for a very long time, it has not exactly been stable. Over the years we have seen it change in size, color, and shape. Back in the 1800’s, the GRS was more elongated and was estimated at one point to be about 25,000 miles across. When NASA’s Voyager spacecraft flew by the planet in the 1970’s, the GRS was estimated as being 14,500 miles wide. In 2014, observations with the Hubble Space Telescope placed the spot at 10,250 miles wide. In the spring of 2017, the size of the GRS had shrunk to 10,140 miles. 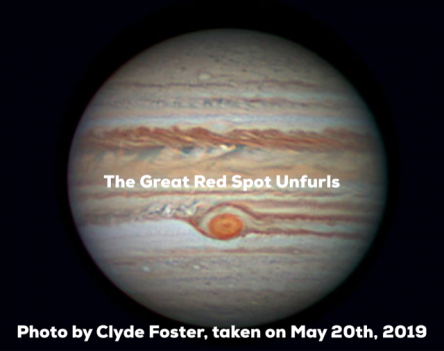 Its color has changed over time as well. Sometimes the GRS is a faint salmon pink and at others, it’s a brick red.   And yet at other times, it has become white, making it “disappear”, it’s presence only being marked by a “Red Spot Hollow”.

Just last month, the GRS has begun doing something altogether different. During the month of May, amateur astronomers imaging the planet began to notice that the South Equatorial Belt is ripping away shreds of the GRS in streamers that are thousands of miles long. NASA’s Juno spacecraft, currently orbiting Jupiter, has also observed “blades” or “flakes” of the GRS detaching from the storm’s western side.   What exactly is causing this is still unclear. However, Juno will be making a pass over the GRS in July and you can bet astronomers will be keeping a close watch on it. If this unraveling of the GRS continues at this pace, some astronomers estimate that is could disappear in the next 20 years. Better get out and look now!