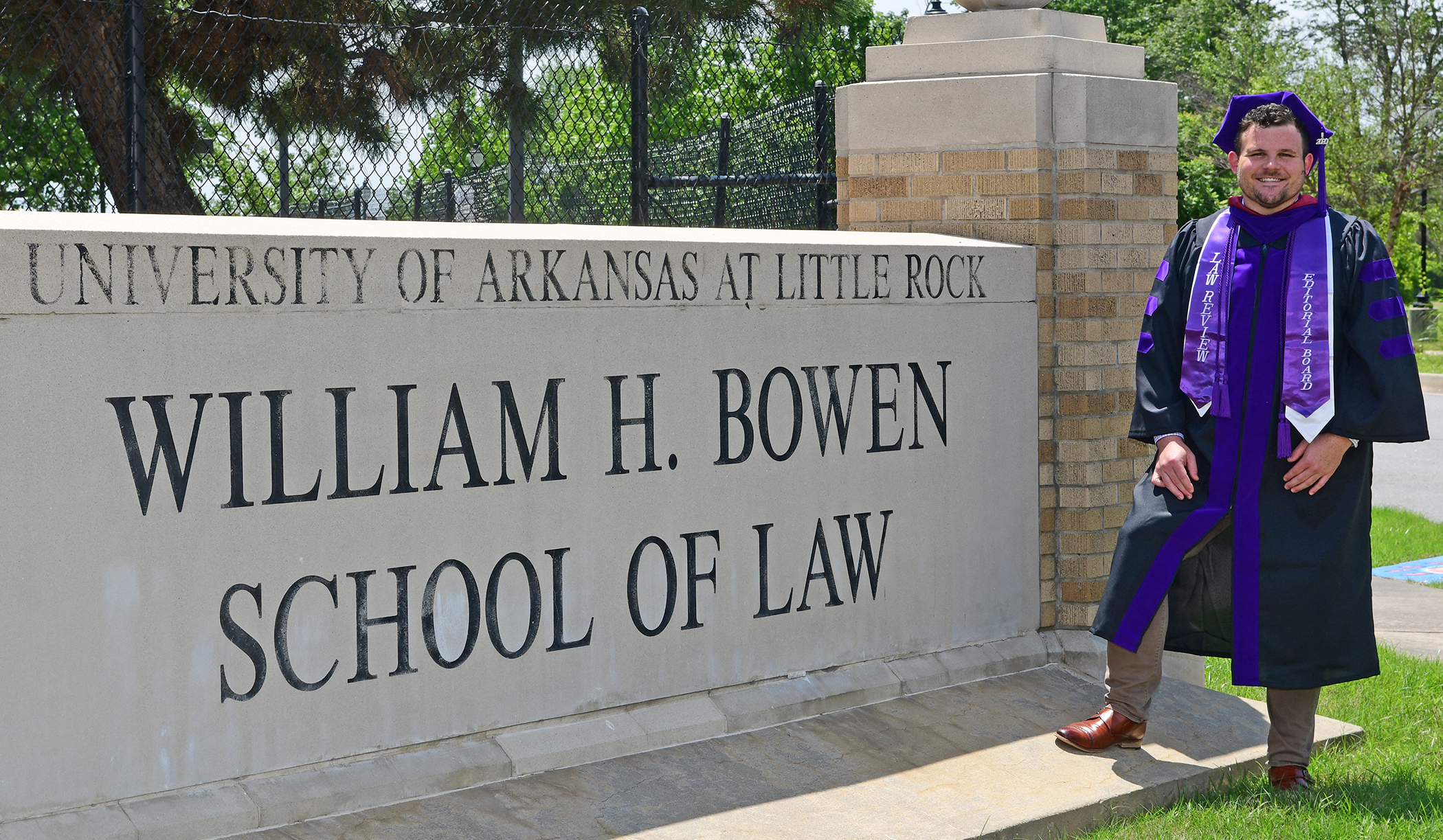 “Graduation is bittersweet,” Wickliffe said. “I loved my law school experience. I created lifelong friendships and gained numerous professional and personal mentors. It will be interesting to transition into this new phase of my life and to finally become a lawyer. I’m nervous but very excited at the same time.”

The first-generation law student begins a bar examination preparation course at the end of May and will take the bar exam in July. After earning his undergraduate degree in 2016, Wickliffe chose Bowen for its location close to home, emphasis in public service, and affordable tuition.

“I earned my undergraduate degree in business management, but I knew a career in business was not my calling,” he said. “I was conflicted between pursuing a degree in higher education or my long-term dream of becoming an attorney. I took a year off to make sure it was my true calling. I want to practice law and maybe one day get involved in the higher education realm of law. After visiting and researching different law schools, I made my decision to attend Bowen based on affordability and interactions with faculty and staff.”

While at Bowen, Wickliffe said he had three mentors who really helped him succeed at law school.

“The first is Dean Theresa Beiner. She was my advisor through the writing and publication process of my law review note,” he said. “Whenever I needed moral support or a guiding word, she was there for me. My second is Kristen Minton, director of academic support and bar success. I had the honor of working with her as a teaching assistant this year. She’s taught me the ins and outs of the legal field and the interplay between law school, the bar exam, and practicing law. Finally, Dean Rejena Grotjohn has been my mentor since day one. She’s helped me through every avenue of law school. She’s always the first person I call with difficult learning questions.”

Wickliffe’s law review note was published this spring. It’s entitled: “Answering the ‘Million Dollar’ Question: The Meaning of ‘Sex’ for Purposes of Title IX, Title VII, and the Equal Protection Clause, and Its Impact on Transgender Students’ Membership in Fraternal Organizations.”

Wickliffe made the most of his time at Bowen with multiple law clerk experiences. He clerked at the Arkansas Attorney General’s office in the Civil Department, the Monterrey Law Firm, and the Arkansas Municipal League, where he focused on civil litigation. During the spring semester, he externed for Judge Joe Volpe in the United States District Court of the Eastern District of Arkansas.

“I enjoyed all the clerkship experiences because they all taught me something different and focused on different areas of the law,” he said. “Externing with Judge Volpe, however, was my favorite. Judge Volpe was in the middle of criminal docket duty, so I had the privilege to observe multiple criminal hearings.”

While Wickliffe always planned for a career in criminal law, he said his multiple clerkships have left him open minded to other possibilities in the legal system. His clerkship with the Monterrey Law Firm, for example, helped him see how immigration law and criminal defense can work together in a practice. And his work in Bowen’s Office of Student Affairs and as a teaching assistant in bar exam prep classes also has him thinking about a career in legal education in the future.

“Given my experience in student life during undergrad, the position in student affairs at Bowen was an easy transition and was a good fit. It was fun to see how undergraduate education and law school dovetail but are distinctively different,” Wickliffe said. “I like the supportive nature of the Bowen community.”

A fun fact about Wickliffe is that he has worked at American Pie Pizza in Maumelle since 2009, which has helped pay for his education. He and his twin brother, Jarod, have a pizza named after them. The Wickliffe Twin Creation is a buffalo chicken bacon ranch combination pizza.