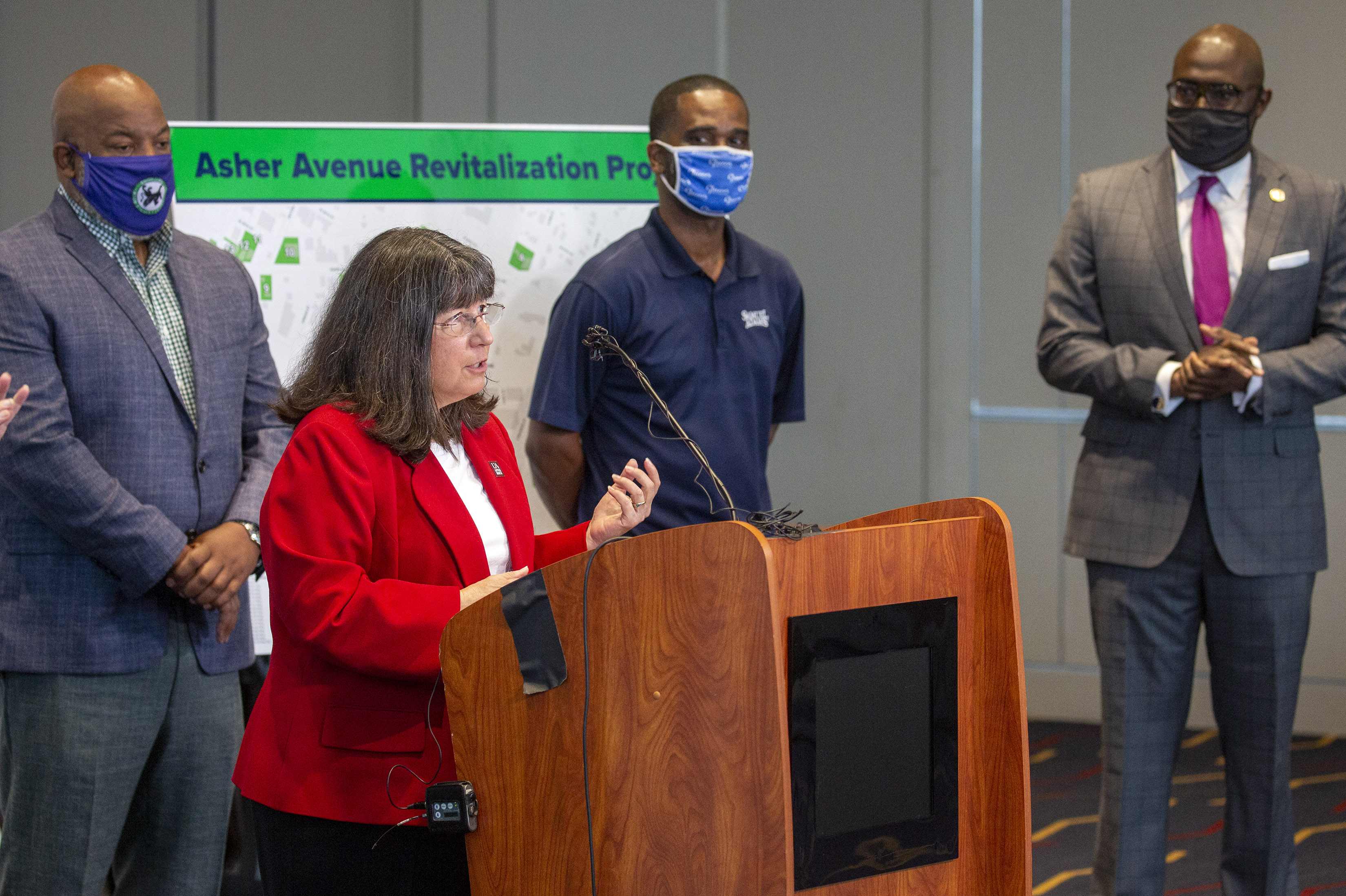 The plans are part of an effort to increase quality of life, bring in businesses and residences, and spur economic growth in an underserved area of Little Rock.

“…Over the past 20 months, we have been very intentional,” Mayor Scott said. “We have been able to move from platitudes to policy to proactive action. One of those actionable efforts has been the revitalization of Asher Avenue. To help revitalize an area, you must first focus on how do you enhance an area.”

Along the Asher Avenue corridor, UA Little Rock owns the University Plaza shopping center, University Village apartments, and the Coleman Sports and Recreation Complex, which is home to the women’s soccer team and men’s and women’s track teams.

“UA Little Rock has long been an anchor in this important crossroads entrance to our city,” Chancellor Drale said. “Our campus, in recent years, has expanded to the south side of Asher Avenue. We envision development that would create a safe and attractive entrance into these facilities off of Asher Avenue.”

“We have owned the property for a number of years and used it to house various departments that had space needs,” Chancellor Drale said. “However, our plans have always been to rebuild this center with a focus not just on our campus needs, but also how those might intersect with the interests of business and the concerns of the community in which we live.”

UA Little Rock is in the planning phase for redeveloping the center, and is in talks with partners, including the City of Little Rock, about the design of a public-private partnership for the project.

“A redeveloped center on the south end of the UA Little Rock campus will provide an important face to the Asher Avenue corridor,” Chancellor Drale said. “It will add to the positive development the mayor sees for this part of Little Rock, and we are proud to be a part of these changes. We will work with neighborhoods and other stakeholders to create a center that serves the campus and the community.”

The University District Development Corporation will be a vital part of UA Little Rock’s revitalization efforts in the neighborhoods surrounding the university. University District is an initiative with UA Little Rock and its partners to increase home ownership, job growth, public safety, and neighborhood amenities in the areas around the university.

“The University District area is full of potential for growing new businesses, attracting new residents, and for becoming a new region of exciting opportunity in Little Rock,” Chancellor Drale said. “The University District office, along with the Arkansas Small Business Technology Development Center and the Arkansas Economic Development Institute, both at UA Little Rock, are excited and primed to be collaborators with the City of Little Rock in this significant endeavor.”

The City of Little Rock’s revitalization plan will include a multi-pronged approach. One part of that vitalization effort included partnering with the Arkansas Department of Transportation to repave and resurface Asher Avenue and South University Avenue.

Little Rock Planning and Development Director Jamie Collins said city officials have been meeting with the owners of buildings that have fallen into disrepair to discuss if the owners plan to renovate, demolish and rebuild, or sell the properties. Three such buildings are located at 5518 W. 33rd St., 4500 Asher Ave. and 3004 Lewis St. Collins said he expects to see significant progress on the properties within three months.