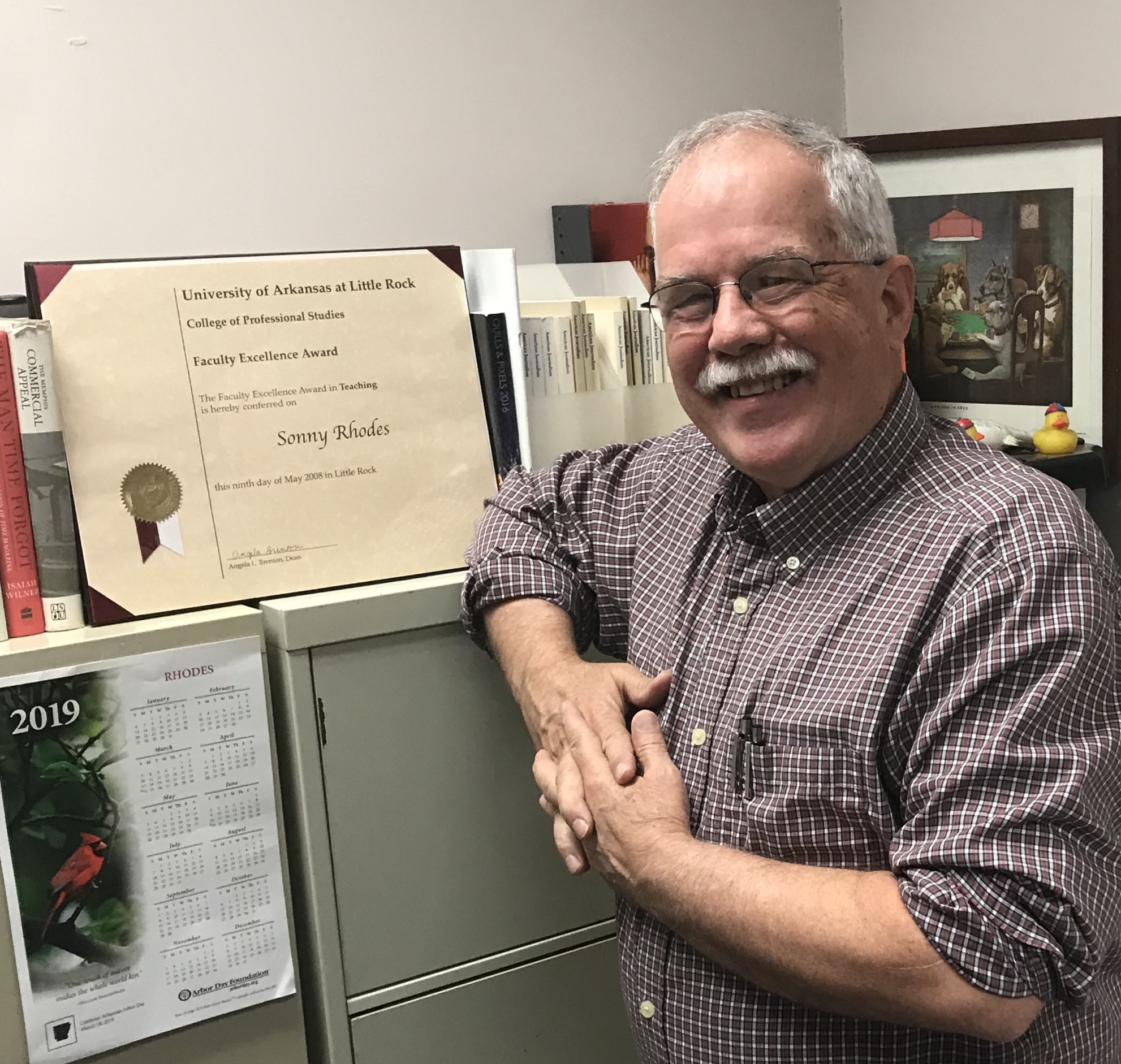 “Having been a reporter and editor for a long time gives me some credit with the students,” Rhodes said. “If they are in a reporting class, I know some of the challenges they are facing, and I can relate to them and help them overcome some challenges by relating some of the real-world experiences I had.”

Though Rhodes earned a bachelor’s degree in education, he was a hardcore journalist who hadn’t considered teaching as a full-time career. In 1990, Jay Friedlander, then chair of UA Little Rock’s journalism department, asked Rhodes to take a leave of absence from the Arkansas Democrat to fill a 9-month teaching role for the school year.

“I applied back in 1990 to teach a night course in journalism,” Rhodes said. “It just so happened they were in need for somebody to teach full time. I fancied the idea of teaching, but I never thought of being more than an adjunct. I was surprised my boss let me have a leave of absence. I really fell in love with teaching and wanted to come back. Nine years later, a full-time position opened.”

Now entering his third decade of teaching, Rhodes said his communication and listening skills along with a friendly attitude have helped him create a good rapport with his students.

“I think these skills are vitally important in teaching and in journalism,” Rhodes said. “These are all skills that I was able to hone during many interviews over the years. It’s all about establishing relationships. You have to teach every student as an individual, get to know that student, build a rapport, and show them that you are someone who they can trust to be looking out for their best interests.”

His colleague, Tim Edwards, interim director of the School of Mass Communication, said Rhodes is a popular and well-respected teacher because of his efforts to help students succeed.

“Professor Rhodes is one of the most caring individuals I know,” Edwards said. “He cares about the success of his students and goes above and beyond the call of duty to assist them. I can’t count the number of students he has helped get a scholarship, an internship, or a job through his letters of recommendation and industry contacts. He shares his knowledge and experience freely, and continues to stay current in an ever-changing media environment. He is not just a teacher to his student but a mentor and friend.”

Since technology and skills are continually changing for journalists, Rhodes instills the value of lifelong education into his students.

“One piece of advice I try to instill in all my students is that education is a lifelong experience,” said Rhodes, adding that he would offer the same advice to new professors. “They should be prepared to continually change the way they do things and be open to new styles of teaching and learning. The technology is such that students are continually coming into the job field with different skill sets and expectations.”

A native of Pine Bluff, Rhodes graduated from Watson Chapel High School and also has a master’s degree from the University of Mississippi. He lives in North Little Rock with his wife, Julie. He has three children and two grandchildren.