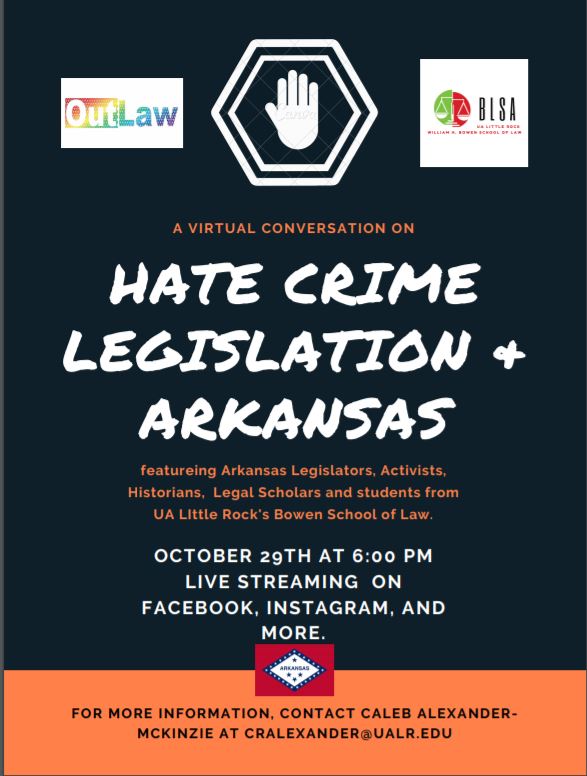 The UA Little Rock Department of World Languages and the Multicultural Center will host a virtual event, “The Black & Brown Electorate: A Roundtable Discussion on African American & LatinX Politics and the 2020 Election,” from 6-7:30 p.m. Oct. 29.

The speakers will host a roundtable discussion following the presentations. Those interested in attending may register at the following link.

During the second event, the UA Little Rock William H. Bowen School of Law OutLaw Legal Society and Black Law Students Association will host a virtual panel to discuss hate crime legislation in Arkansas. The “Legislating Against Hate: A Conversation on Proposed Hate Crime Legislation in Arkansas” will be held from 6-7:30 p.m. Oct. 29.

Arkansas is one of only three states in the U.S. without a hate crime law, but there is a bipartisan effort to pass hate crime legislation during the next legislative session. The proposed legislation would “enhance penalties for offenses committed due to a victim’s race, color, religion, ethnicity, ancestry, national origin, homelessness, gender identity, sexual orientation, sex, disability, or service in United States Armed Forces.”

The panel will include Theresa Beiner, dean of the William H. Bowen School of Law, Arkansas Sen. Jim Hendren, Arkansas Rep. Fred Love, and Eric Reese of the Human Rights Campaign. Christina Schutt, director of the Mosaic Templars Cultural Center, will speak on the historical impact of hate-based crime in Arkansas.

The event may be viewed live online.