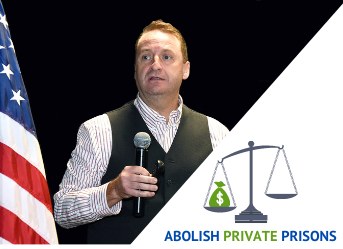 André douglas pond cummings, a professor of law at the UA Little Rock William H. Bowen School of Law, together with Executive Director John Dacey, has received a $5,000 NFL Social Justice Grant on behalf of Abolish Private Prisons, a nonprofit organization that fights to end the practice of locking people up for profit.

“We are truly honored to receive this grant,” said cummings, who serves as president of the board of Abolish Private Prisons. “As a wholly volunteer organization battling a monolithic system that discriminates and destroys minority communities, we are grateful for, and encouraged by, this recognition from the NFL. The funds will go to immediate use in supporting our efforts to end for-profit incarceration across the U.S.”

Members of Abolish Private Prisons include lawyers and advocates who are pursuing a court ruling holding that profiting off the backs of prisoners violates the U.S. Constitution. Their first class action lawsuit addressing the issue, Nielsen, et. al v. Shinn, was filed in August 2020 in U.S. District Court for the District of Arizona. Abolish Private Prisons asserts that incarcerating American citizens for profit violates the 8th, 13th, and 14th Amendments to the U.S. Constitution.

The grant to Abolish Private Prisons was made on behalf of Terry “Tank” Johnson, a retired defensive tackle who played in the NFL from 2004 until 2010. He played for the Chicago Bears, the Dallas Cowboys, and the Cincinnati Bengals. Post-retirement, he obtained a degree in sociology from the University of Washington and created “Moving the Chains,” a counseling program that helps ex-offenders learn from their mistakes and avoid negative influences in their lives.

“The increase in athlete activism this past summer has been inspiring,” states cummings. “From the NBA’s support of the Black Lives Matter Movement to the NFL’s commitment to contribute $250 million to social justice causes, a new era in activist athlete participation points to true efforts and new opportunities to work toward equal justice under the law and anti-racism within the U.S.”