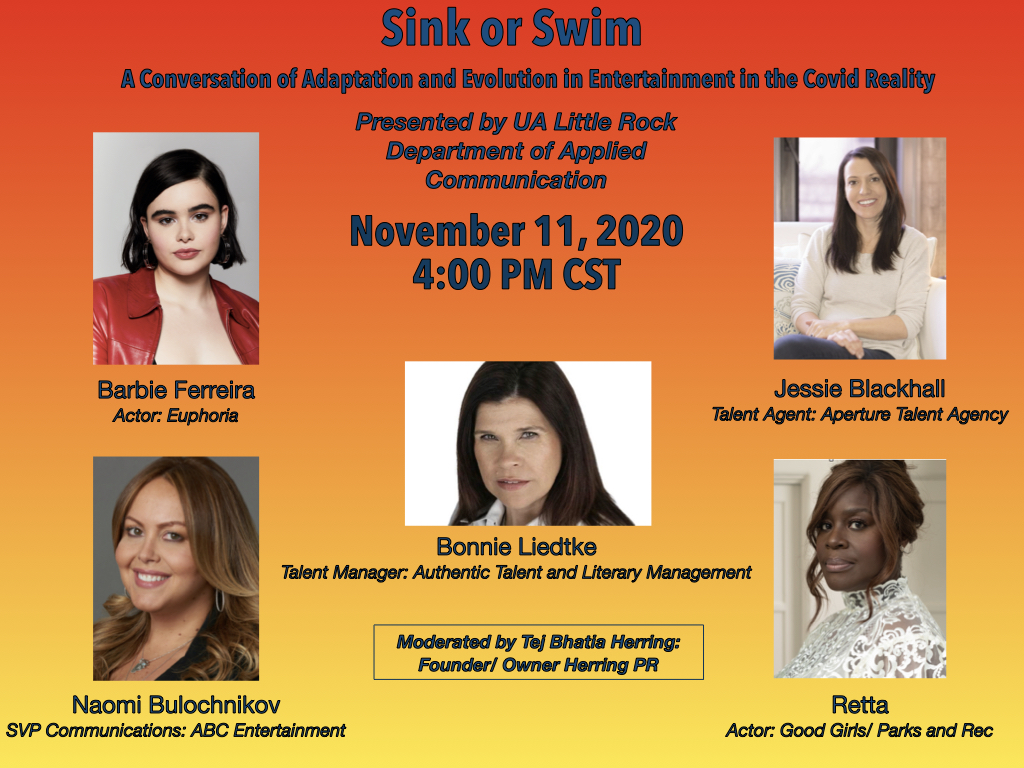 The University of Arkansas at Little Rock will host a panel of women in entertainment who will discuss how they have adapted to an industry that has changed during the coronavirus pandemic.

The event, “Sink or Swim: A Conversation of Adaptation and Evolution in Entertainment in the Covid Reality,” will begin at 4 p.m. Wednesday, Nov. 11.

The UA Little Rock Department of Applied Communication is bringing together six women from the entertainment industry who have had to adapt, pivot, and roll with the punches during the coronavirus pandemic. These panelists will share their experiences and answer audience questions about picking up the proverbial pieces of 2020 and creating a better tomorrow.

Tej Bhatia Herring, founder and owner of Herring PR and a Little Rock native from the Applied Communications department at UA Little Rock, will moderate the panel.

The panelists include colleagues and clients of Herring:

Those who would like to attend the event may register at the following link.

More information about the panelists:

Retta has delighted audiences with her performance aptitude and comedy precision and has established herself as a consistent first pick for Hollywood. She currently stars as Ruby on the NBC hit series “Good Girls.” Retta also appeared in the 2019 hit comedy “Good Boys,” which opened as the number one movie in the country. Audiences related to her as Barbara on the Bravo hit series “Girlfriends’ Guide to Divorce,” a drama which explored female friendships and the post-divorce ups and downs. Retta spent a memorable seven seasons playing beloved office mate Donna Meagle on NBC’s critically acclaimed comedy “Parks and Recreation.”

Naomi Bulochnikov is responsible for all strategic corporate communications efforts, consumer press campaigns, and awards outreach for ABC Entertainment. Bulochnikov-Paul joined the network from cable sibling, Freeform, where she served as vice president of communications, overseeing strategic communications efforts, program publicity, and talent relations. She joined Freeform in 2017 on the heels of the company’s rebrand from ABC Family and quickly made an impact with her work on the first-ever Freeform Summit, which has now become an annual event. The summit garnered impressive results for the network and positioned Freeform as an industry leader in young adult programming, elevating the brand and creating scalable conversation amongst storytellers.

Jessie Blackwell has been working as a talent agent for over 17 years, developing and cultivating successful careers. Having built a reputation as trustworthy, diligent, and entirely dedicated towards the success of her clients, Blackwell has been a prominent fixture in the entertainment industry and is known as having a keen eye for talent. Prior to launching and running a successful team of agents at Aperture Talent in 2016, she spent 13 years as an agent at CESD Talent.

Barbie Farreira’s raw talent, charisma, and self-assured voice have established her as one of the most rapidly rising stars in Hollywood. Ferreira gained prominence with her captivating portrayal of Kat, a teen navigating the ups and downs of high school, friendship, and social media, in the HBO mega hit, “Euphoria.” Ferreira became a fan favorite while starring in her own Vice series entitled “How to Behave.” Ferreira is starring in the 2020 YA film adaptation of the coming-of-age story “UNpregnant.”

Bonnie Liedtke has long been known for her tenacious development of young actors and is renowned for launching the careers of movie stars Leonardo DiCaprio, Hilary Swank, and Zac Efron. Liedtke began her career as an agent and was a partner and owner of both Gold/Marshak/Liedtke and TalentWorks leading to her tenure at WMA/WME. In 2012. Liedtke made the transition from agent to manager. A senior member of Authentic Talent and Literary Management, Liedtke represents a diverse roster of clients including Dylan and Cole Sprouse, Jack Kilmer, Willow Shields, Joel Courtney, and Alberto Frezza.