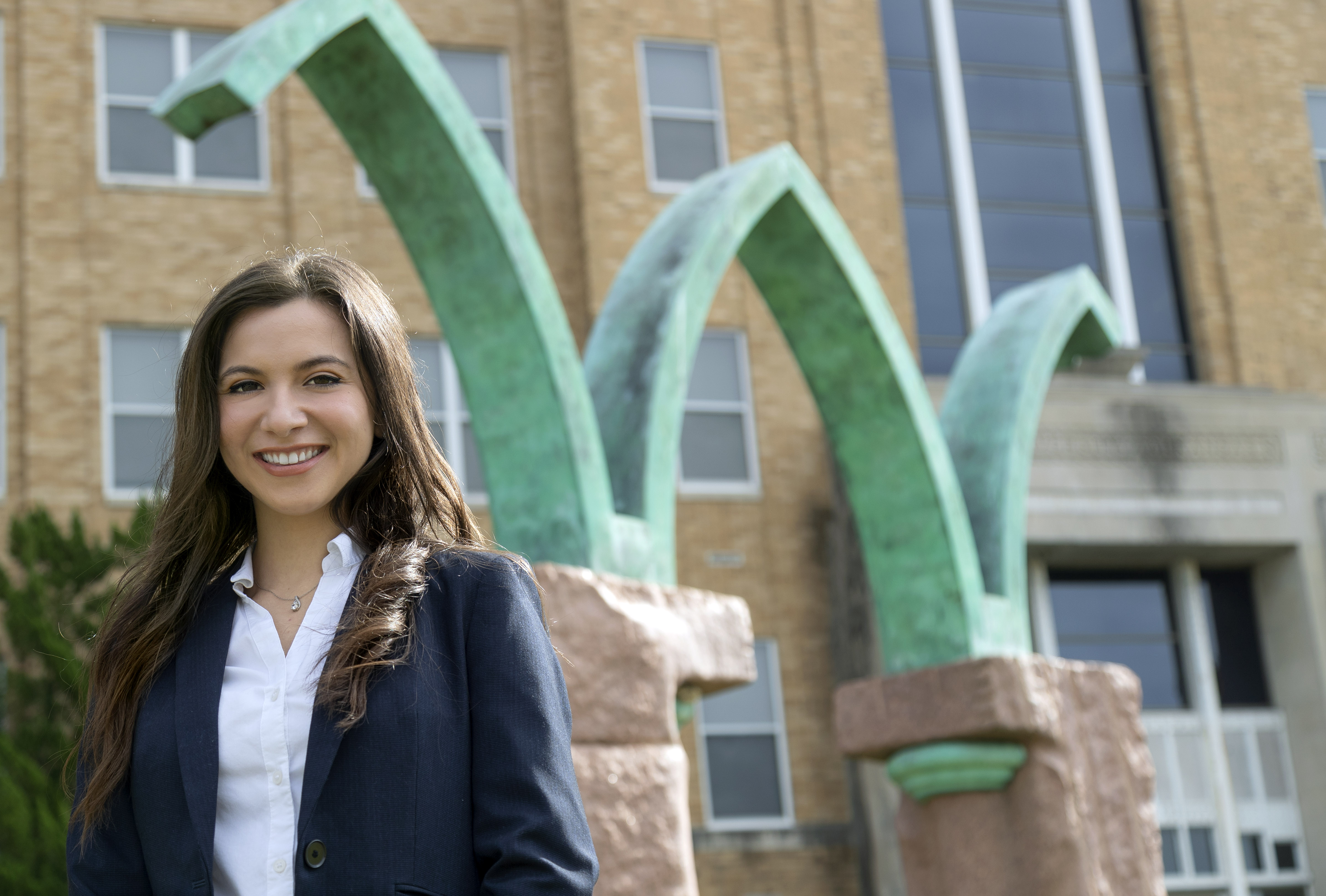 For Mirella Gallardo, a third-year law student at UA Little Rock William H. Bowen School of Law, being the first member of her family to attend college has meant the world to her and her family.

“I’m not a first-generation student because my parents didn’t want to go to college,” Gallardo said. “They just didn’t have the resources. It was really tough for them. Ever since I was a child, my dad was so excited. He said he would have given anything to go to college. My parents have been so happy for me, and that has motivated me the whole time, knowing that my parents wanted that for me and that I have their support.”

Gallardo’s family moved from Mexico to Virginia and finally to Saltillo, Mississippi, where her parents and younger brother and sister still live. She earned a Bachelor of Business Administration degree in marketing from the University of Mississippi.

“My experience has been challenging, but if it wasn’t for my family’s support,I don’t think I would be as far as I am in my education,” Gallardo said. “Even though they didn’t go to college, they raised me thinking that I had it all and they would give me the support that I needed. They never expected me to go down the same path as they did. It’s been tough, because sometimes you have to learn some things on your own. Do I take the ACT or SATs?. What’s the LSATS? My parents couldn’t tell me, but everything they could help with, they were there.”

Gallardo has wanted to become a lawyer since she was 12. After looking at the requirements for law school as an undergraduate student, she had doubts. While Gallardo began college thinking law school wasn’t for her, it wasn’t a dream easily set aside. As her college graduation drew closer, she realized law was still her career goal.

“My mother became a U.S. citizen three years ago,” Mirella said. “I went to the ceremony and saw so many different people, from multiple nationalities, who wanted to be American citizens and had worked hard for that achievement. It motivated me.”

Gallardo considered staying in Mississippi to attend law school, but she was moved by Bowen’s caring and friendly environment.

“After coming to visit the campus, it felt different than any other law school I went to. It felt like a family environment, and it felt like the professors cared,” Gallardo said. “They seemed very down to Earth, and I was having a conversation with good people who really wanted you to go to their school. They provide you with the resources you need to succeed. I decided to take a leap and move to this state where I didn’t know anyone. It was far for me considering that I had never lived outside of Mississippi since I was a child. I wouldn’t have done that if the law school hadn’t made me feel comfortable and at home.”

Gallardo, who married her fiancé, an accounting student in Virginia, over the summer, will graduate from Bowen in May 2021 and take the bar exam in July 2021. She is still considering what type of law she wants to practice, but said she finds criminal law the most interesting.

For other first-generation students, Gallardo said that getting involved in student organizations, school events, and professional development activities has helped her to be successful in college.

“If I hadn’t become involved in clubs, events, and clerkships, I would have shied away from other people,” Gallardo said. “Going into anything as a first-generation student and being surrounded by people whose parents are lawyers and alumni can make you feel excluded. Don’t think of yourself as less. You have to put yourself out there and believe in yourself.”

At Bowen, Gallardo has participated in the Dean’s Student Advisory Committee, the Hispanic Law Students Association, and the Student Wellness Society. She also worked in the Admissions office at Bowen and had clerkships with Monterrey Law Firm in North Little Rock and Heaton and Harris in Hot Springs. Currently, she is completing an externship with the Arkansas Access to Justice Commission.

“Bowen is a very small and family-like environment,” Gallardo said. “The professors are very inviting, and it gave me the motivation to get involved in school with different student organizations. I’ve gotten clerkships and jobs, and I’ve made connections in Little Rock. The faculty at Bowen has never shut their door. They go above and beyond to let you know that they are rooting for you. They have all these systems in place to help you succeed.”