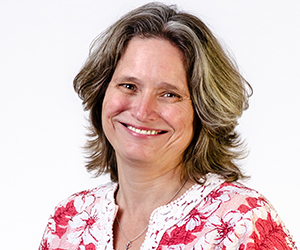 Dr. Catherine Crisp, an associate professor of social work at UA Little Rock, is using her training in mindful self-compassion to help fellow educators reduce the stress in their lives brought on by a global pandemic.

Crisp, who happens to be the only mindful self-compassion trained teacher in Arkansas, has been leading a weekly meditation group for her co-workers at UA Little Rock during the 2020-21 school year.

Dr. Peggy Scranton, a professor of political science who is a mindfulness-based stress reduction teacher, and Dr. Dent Gitchel Jr., an associate professor of rehabilitation counseling who is a compassion cultivation training teacher, facilitate the group that meets for 30 minutes at 8:30 a.m. on Tuesdays and usually attracts 5-10 people.

“What’s been so remarkable about teaching with them is that we are each trained in a different form of meditation,” Crisp said. “We spend the first five minutes inviting people to get settled in, which for me means getting the fidgetiness out of my body and finding a place of stillness. We gently lead people into the practice of meditation. I think of it as being a slow walk toward the beach. After five minutes, we do a more formal practice that lasts about 20-25 minutes. When the meditation is over, we invite people to check in or ask how the experience was for them.”

For those who aren’t familiar with the meditative style of mindful self-compassion, it’s a question that Crisp gets asked often enough.

“Mindful self-compassion consists of treating yourself like a cherished friend, and there are three components,” Crisp said. “The first is mindfulness which is paying attention to the present moment without attempting to change it. The second is common humanity which is a sense of connection to other people. And the third is self-kindness, which is being kind to ourselves.”

As a college professor, Crisp has found that practicing mindful self-compassion has made her a better teacher who can relate more with her students.

“It starts with being compassionate to myself and sending that energy out into the world,” Crisp said. “When I am kinder to myself, I am kinder to those around me. For the first time this semester, I tried something that I called ‘the seven days of grace’ for my students. Some people need a hard deadline, and some people need a soft deadline. The late penalties for my students don’t’ start until the seven days of grace have finished which is seven days after the due date.”

Crisp began meditating about 12 years ago and practicing mindful self-compassion about five years ago after unexpectedly experiencing a significant hearing loss in her right ear.

“Five months after my diagnosis, I went to the first workshop I’ve ever attended on mindful self-compassion, and I was led to some exercises that immediately softened my response to my hearing loss and gave me permission to grieve,” she said.

Crisp said that practicing mindful self-compassion has had a huge impact on her life, leading her to live a happy and healthier life.

“Mindful self-compassion had an effect on this life-changing, but not life-threatening, health issue I was experiencing,” Crisp said. “It can be applied to a lot of other things, not just the big stuff but something as simple as getting frustrated at the person in front of me in the grocery store line. I start practicing mindful self-compassion, and my body softens and I relax and suddenly the situation is not as stressful as it was.”

After seeing the positive results mindful self-compassion brought to her life, Crisp undertook the training to become a teacher in the technique during a sabbatical in 2018.

“This is where I will give extraordinary credit to UA Little Rock since I applied to do this as my sabbatical,” Crisp said. “I drove to New Mexico to take the class, and I did the teacher training in a Boston suburb in 2018. Then I offered the class for free to a class of 12-14 women, most of whom were employed by MidSouth.”

If you’d like to learn more about mindful self-compassion, Crisp is hosting an introductory workshop from 9 a.m. to 12:30 p.m. Saturday, April 24, via Zoom. The workshop costs $10 for community members, $15 for those earning three hours of continuing education credits, and is free for UA Little Rock social work and gerontology students. All funds raised will be donated to the UA Little Rock Association of Black Social Workers.