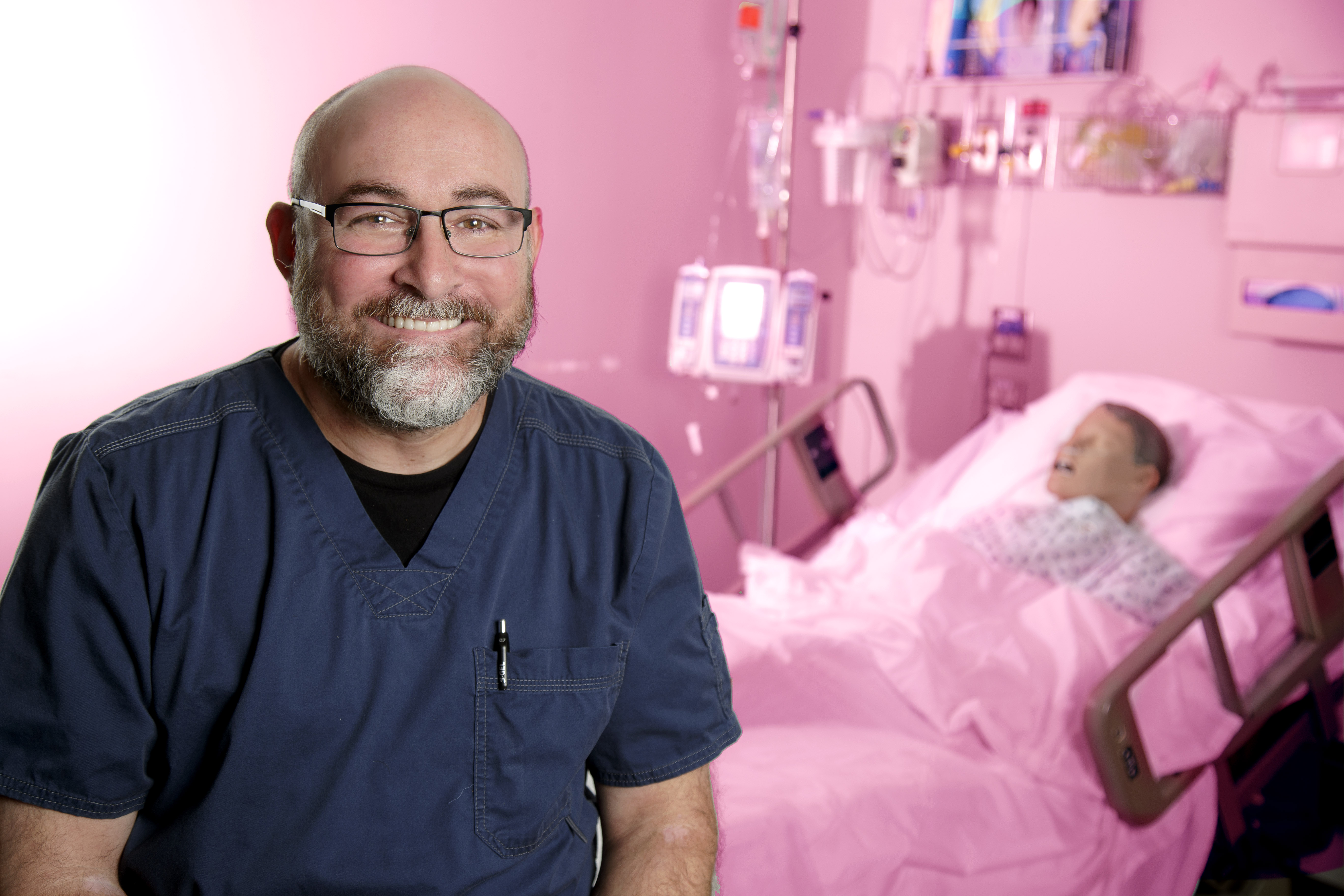 After a 20-year career with the U.S. Marine Corps, Kevin Barnes, a native of Bauxite who now lives in Jacksonville, returned to Arkansas to pursue a nursing career.

“I was involved in aviation, but health care was the secondary thing I was interested in when I was in the Marine Corps,” said Barnes, a senior nursing major at UA Little Rock. We didn’t have a medical unit in the Marine Corps. After 20 years, I decided I was going to do something in healthcare. My brother teaches nursing in New Mexico. I spoke with him about all the different opportunities, and I decided to go to nursing school.”

Barnes said that people are always curious about his shift in careers, but they really aren’t as different as everyone thinks.

“I was in aviation the whole time I was in the Marines,” he said. “It’s kind of the same thing. I always had to figure out what was wrong with airplanes and how to fix them and now I’m doing it with people.”

Once he was back in Arkansas, Barnes earned his associate degree in nursing from Baptist Health College Little Rock and began working in the Intensive Care Unit at Baptist Health Medical Center in North Little Rock. After moving to the Central Arkansas Veterans Healthcare Administration, Barnes has spent the past two years working in the Acute Inpatient Psychiatric Unit.

“I knew I wanted to work at the VA, and I was one of two veterans on the floor. I am one of the few nursing students who enjoyed my psychiatric rotation,” Barnes said. “I’ve been to Iraq and Afghanistan so the patients identified with me and opened up with me a little more. That was a benefit. You assess people more by talking to them and getting to the root of the problem. Psychiatric doctors only spend about 20 or 30 minutes with them, and we are with the patients 24/7 so you pick up on clues and feed that information to the doctors to help the patient get better.”

“This is actually one of the classes I struggled with at first. Dr. Sheila Sullivan, the professor for the class, was really helpful,” Barnes said. “I was working as a psychiatric nurse at the time, and the paper I wrote included a lot of information on resources and examples of how to prevent injuries while on the job. This is important for nurses because nurses are the ones who are doing the heavy lifting with the patients. It’s important to find ways to prevent falls and accidents in the healthcare industry.”

Barnes will graduate from UA Little Rock this summer with his bachelor’s degree in nursing, and he’s looking forward to some free time after spending the last couple of years as both a full-time nurse and full-time student.

“I’m ready to graduate,” Barnes said. “I’m 45 and one of your older students. My wife jokingly calls me the full-time student like I haven’t done anything else lately.”

Unlike other new college graduates, a job hunt is one thing that Barnes doesn’t have to worry about. He joined Arkansas Surgical Hospital in North Little Rock as an operating room circulator registered nurse in March.

“It’s completely different from any other area of nursing,” Barnes said. “We are helping to advocate for the patient and the surgeon, but the patient is usually only awake for about three minutes once they are wheeled into the surgery room. You mostly get to know the equipment. Preventing infection is the biggest thing we do because there is a big risk of infection during surgeries.”

Barnes is looking forward to continuing his career as a nurse. He feels that nurses have an important role in healthcare.