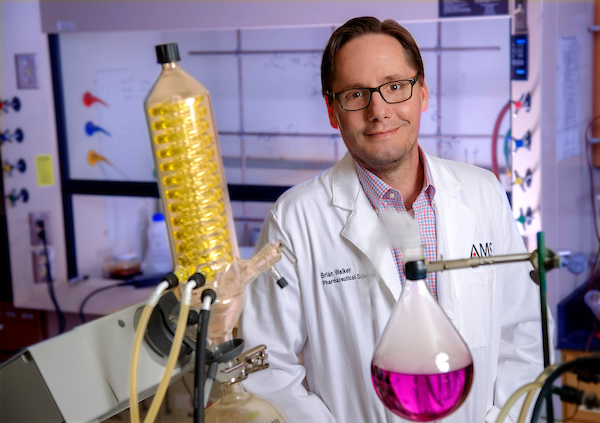 Several professors and students from the UA Little Rock Department of Chemistry have been honored by the Central Arkansas American Chemical Society.

Dr. Brian Walker, assistant professor of chemistry at UA Little Rock, was named the Central Arkansas Professor of the Year.

“I was excited just to be nominated for the award because the nominations came directly from the students,” Walker said. “They took the time to write and send in the nomination for me and wrote about what I meant to them as their professor. It was nice to hear their opinions, and I was grateful to win because there are so many deserving faculty members in both our department and in Central Arkansas.”

Walker was nominated for the award by the American Chemical Society student chapter at UA Little Rock.

“Dr. Walker is an inspiring professor that is as charismatic as he is knowledgeable about his respective field; the epitome of what all professors should strive to be,” said Kajal Desai, president of American Chemical Society student chapter at UA Little Rock. “He goes above and beyond normal class and office hours to give his personal time to ensure that students are confident in their abilities.”

After completing his Ph.D. in chemistry at the University of Arkansas, Fayetteville, Walker joined UA Little Rock as a postdoctoral researcher in 2016, becoming an assistant professor in 2020.

“Ever since Brian joined the department as an assistant professor, he has taken the leading role in teaching many organic chemistry courses,” said Dr. Anindya Ghosh, chair of the Department of Chemistry. “Brian is a sincere and hardworking individual who teaches organic chemistry, keeping student success in mind. The students recognized him as a great teacher, and the award is a testimony of Brian’s well-rounded teaching abilities. Brian is also doing some cutting-edge organic chemistry research. It is just the beginning for him, and a lot more success will come his way.”

Walker said the secret to his teaching success is promoting inclusivity in the classroom.

“I love the diverse student population we have at UA Little Rock from traditional, non-traditional, first year, and underrepresented minority students,” Walker said. “At many universities, organic chemistry has a stigma of being a ‘weed out’ class that keeps students from achieving their goals. I try to make the material relatable and understandable for students from any background so they can be successful. It’s a challenging course and requires a lot of work, but it can also be a positive turning point for their academic careers as they transition to becoming truly university students. I get a lot of satisfaction from seeing the students succeed at something they didn’t think they could do so I’m willing to put in the time to help them reach their goals.”

In addition to Walker, Marian Douglas, a senior instructor emeritus for the Department of Chemistry, received the Volunteer Service Award for her tremendous contributions and service to support the Central Arkansas American Chemical Society over the years.