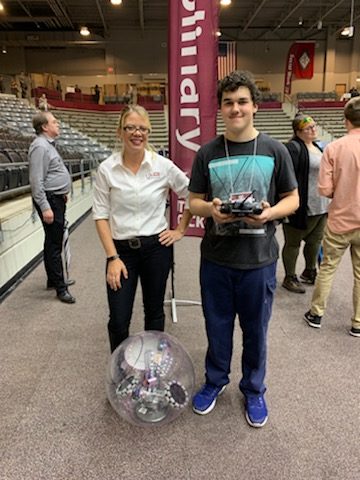 One University of Arkansas at Little Rock student is hoping his series of microdroids inspired by a galaxy far, far away will inspire other students to get interested in STEM education.

“I love ‘Star Wars’ and have a passion for robotics. So naturally I decided to build ‘Star Wars’ inspired robots,” Alvarez-Barreiro said. “The reason I wanted to do microdroids was because most robots that kids see are big and complicated. I wanted to show that it is possible to build a cool looking robot with very few funds and very simple parts. I used to work at the STEM Education Center so I have a passion for STEM events.”

Alvarez-Barreiro has participated in the VEX Robotics summer programs at UA Little Rock since he was in high school. Once he completes the six microdroids with funding from the Signature Experience Award, he plans to take them to different schools next year to share his love of robotics with junior high and high school students.

“I think the project is very cool that you can take something from a fictional universe and make it in real life,” he said. “There is a club of BB-8 and R2-D2 builders, and it’s a big worldwide group of people who have experience building these characters and that was very helpful for me. Sadly, I’m the only BB-8 builder in Arkansas, so I can’t ask local people for advice on the building process.”

Alvarez-Barreiro spends a few weeks designing each microdroid on a CAD program. Depending on the size of the drone, it takes one to three days to print the components off of a 3D printer before they are assembled and painted.

He has a life-size replica of BB-8 that is three feet tall and weighs 33 pounds. His first BB-8 robot came to an unfortunate end, but it led him to a new and better building strategy.

“The first time I did the Signature Experience Award, I was prototyping a BB-8 robot,” he said. “During the expo, someone picked it up and dropped it. It shattered pretty quickly. This gave me an opportunity to create longer-lasting and stronger robots with 3D printing. They are made with PLA, a biodegradable plastic.”

After finishing this project, Alvarez-Barreiro’s next goal is to create a life-size R2-D2 robot to accompany BB-8.