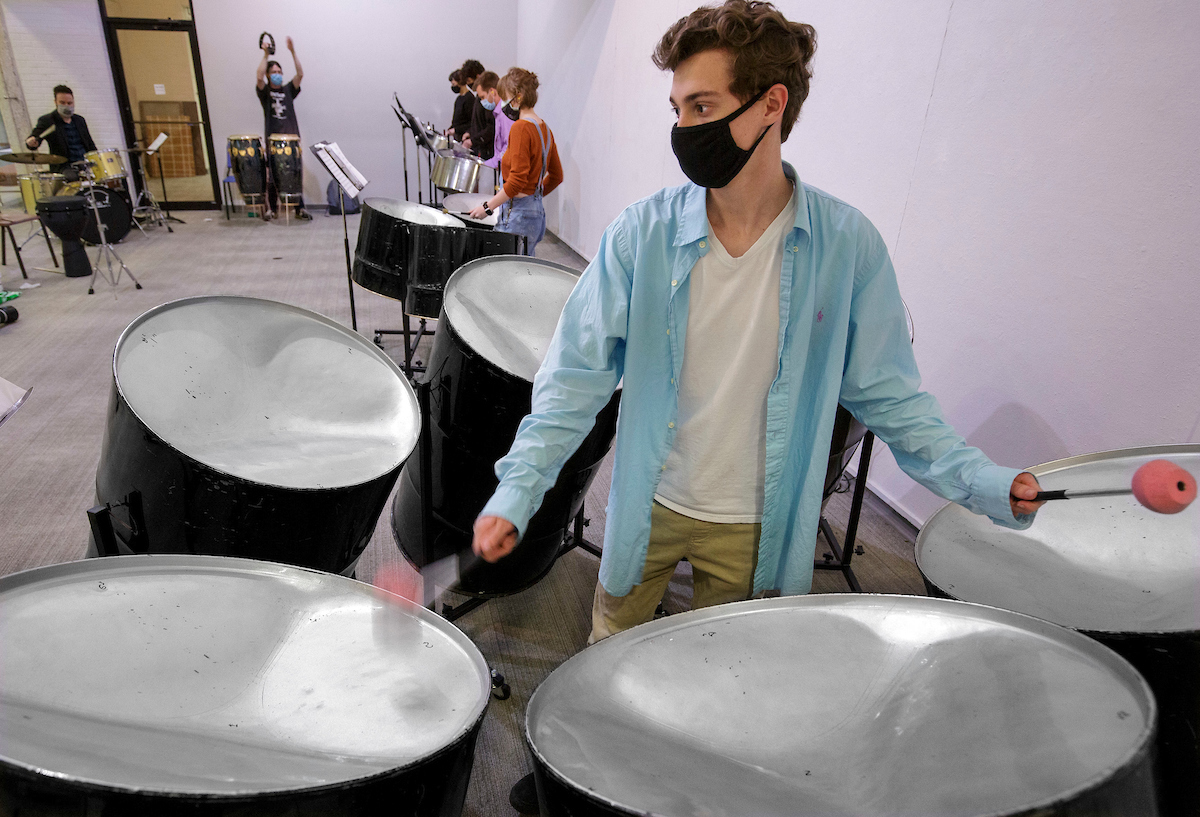 When life gives you steel drums, make a Steel Band.

That was the first thought that came to Dr. Justin Bunting, director of percussion studies, when he arrived at UA Little Rock in 2019 and a search of percussion equipment in the Fine Arts Building led to a fruitful discovery.

“I went through all of the percussion storage rooms, and I found that we had a bunch of steel drums in cases,” Bunting said. “We didn’t have a steel drum ensemble, so my eyes lit up when I saw them. I knew we had to do something with them. We had a full set of steel drums but we had no stands. The drums were there, but we didn’t have stands to put them on or sticks to play them with.”

While UA Little Rock has never had such a band in the past, Bunting has experience leading a steel band of similar size at Western Colorado University.

“Steel bands in general can grow very, very large. In Trinidad, which is where steel drums come from, it can have 20 or 30 people,” Bunting said. “I knew I had arrangements of music that would work here because they worked at Western Colorado. It translated very easily.”

His work has come to fruition with a six-member steel band that began in the fall 2020 semester. There are aspects of the band that are completely unique, according to its dedicated members.

Emma Chambers, a junior fine arts major, has enjoyed playing previously in the Wind Ensemble and was excited for the opportunity to join a new band.

“I really love the music in the Steel Band,” Chambers said. “It’s a really small band, so we mesh together and got to know each other very well. Our director also made our practice schedule after checking on everyone’s class schedules. That’s the first time that’s happened for me. I’ve learned a lot of new things because I’ve never played steel drums before. It’s helped me improve my rhythm and sight reading.”

Alejandro Alvarez-Barreiro, a junior mechanical engineering technology and Spanish major, is also a budding music maker whose latest project was creating a xylophone out of bottles.

“I enjoy learning and playing and making instruments,” Alvarez-Barreiro said. “My main instrument is the tuba, so I’ve enjoyed learning how to play the steel drums. We also play a lot of different types of music from Bruno Mars to Jamaican. If we ever have the chance to play on campus, it will bring a lot of smiles.”

Dr. Bunting said it’s been an exciting experience to see how quickly the band members have taken to the steel drums, especially since only some of them had previously played  percussion instruments.

“I’ve been impressed by how quickly the students have picked up the instruments and been able to play them,” Bunting said. “I felt the enthusiasm for the group would be there. This is an instrument you are learning from scratch. The steel drum is not like any other instrument that everyone has played. Last semester, everyone was looking at the instrument for the first time. I was impressed with how eager they were to learn. By the end of the semester, we recorded a virtual concert and they played seven songs. I was blown away that we could get away with playing that many songs after one semester.”

As one of the band members with previous percussion experience, Stephanie Gimenez, a student from Miami, has a slight advantage over some of her fellow bandmates.

“I saw it as an opportunity to play a new instrument, even though I’ve been playing percussion since I was a young child,” Gimenez said. “I wanted to balance myself out as a percussionist. All of my friends are in this band. It’s my first and last semester in the Steel Band, so I wanted to seize the opportunity. It has definitely opened my eyes up to playing with other musicians. Percussionists usually accompany the band, but we get to play the melody and be front and center in the Steel Band!”

Kevin Fitzgerald, a senior music theory and music history major, agrees that the Steel Band has been a way for him to expand into popular music and is quite a change from his traditional piano performances

“The Steel Band seems more like a fun hangout with friends,” Fitzgerald said. “It’s not as stressful as some bands I’ve been in, and we play a lot of popular music. It’s a good way to incorporate popular music into a college music curriculum. You don’t often hear Bruno Mars or Billy Joel in a traditional college ensemble.”

You can check out the Steel Band in action with the UA Little Rock Percussion Ensemble in the recording of the Spring Percussion Concert. Any student who would like to join the Steel Band may contact Bunting at jbunting@ualr.edu.