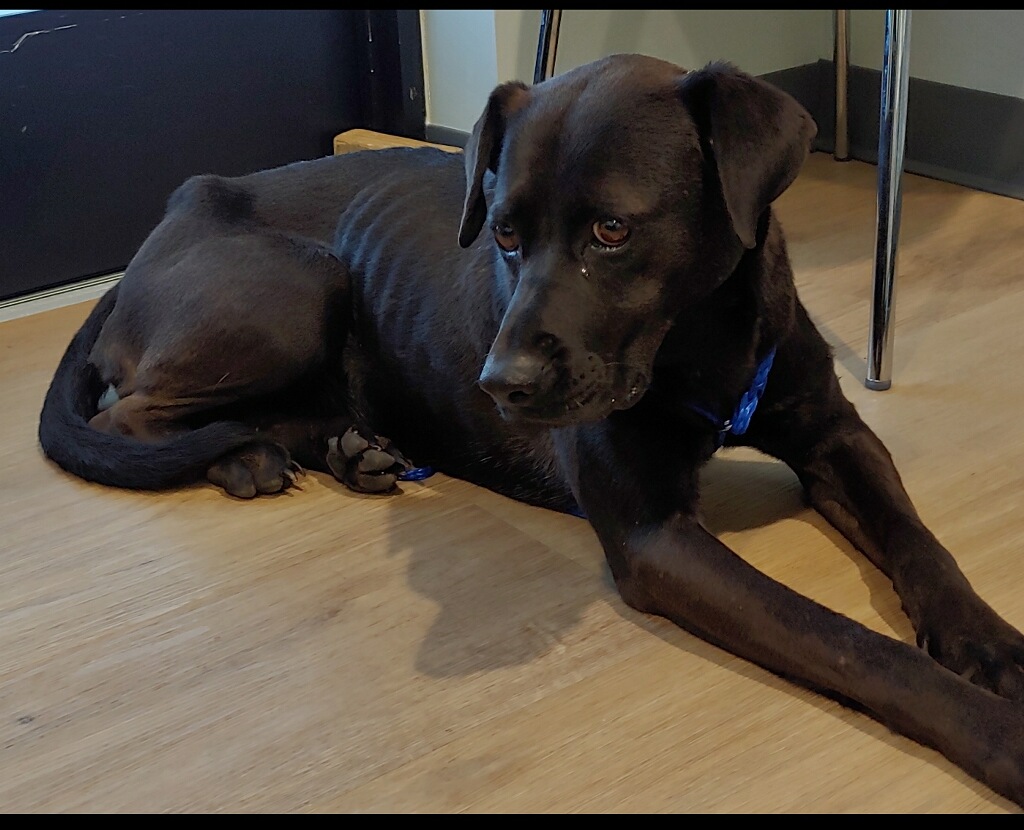 While it takes a village to raise a child, it also takes the efforts of an entire community to save one lost black lab that captured the hearts of the UA Little Rock community.

Over the spring semester, many UA Little Rock employees and students noticed the familiar presence of a black lab, dubbed Bella, who appeared to be living in the woods across from eStem High School.

“The name Bella just sort of came to me and later someone told me that it meant beautiful in Spanish; it was perfect,” Reed said. “Since Bella was first seen, a number of students, faculty, and staff have left food for her. Myself and Paul Floyd from eStem would try to find Bella every day. Paul even came on the weekends to feed her.”

Reed recalls that she and some of the nursing faculty called Little Rock Animal Village. The animal rescue group received permission to trap Bella so she could be taken to a veterinarian and then found a home. Unfortunately, they were unsuccessful.

By this time, Bella’s popularity had grown beyond campus through posts on the app Nextdoor. Carol Blann, who volunteers with Southern Hearts Rescue, got in touch with Reed after speaking with the Department of Public Safety and Facilities Management to find out if there was a way to rescue Bella.

“Bella was an interesting story,” Blann said. “There were so many good people involved in this.”

After several attempts, Blann, Preston Noland, and some UA Little Rock volunteers were able to coax Bella into a trap using cheeseburgers on May 27. After seeing Bella off, Reed remembers being so happy that evening that she no longer had to worry about Bella’s safety. It was the next day when Blann called to report that the furry Houdini had escaped from her foster home.

During her continued search for Bella, Blann said the dog had been spotted multiple times in the neighborhood of her foster home during Memorial Day weekend. Although Blann continued to search, it was days before a teenager called Blann. Bella had been receiving food from Little Caesar’s, a Mexican restaurant, and a storage unit. Bella was eventually lured out of the storage unit using cheeseburgers again.

“Even though it took some effort to get us there, UA Little Rock staff saved her life,” Blann said. “Bella’s bones were sticking out. She had a heavy case of heartworms, so it wouldn’t have been too long before she was gone.”

After hosting Bella in her home for a few days, Blann took her to Pleasant Valley Veterinary Clinic, where she received treatment for fleas, ticks, and heartworm. They estimated that Bella is four years old and was at least 20 pounds underweight. She was suffering from a severe case of heartworms and advanced malnutrition. Bella’s entire vet bill was generously paid by donors who saw her on Nextdoor.

“She’s no longer looking like the dog when she was running around UA Little Rock,” Blann said. “If I sit down and list every single person who was involved with Bella, it would be a long list. It just goes to show you how many nice people there are in this world.”

Bella is now living at the Humane Society of the Delta in Helena, Arkansas, where there are experts who work with animals who aren’t used to living with humans. Bella will stay there until she’s completed treatment for heartworms. Blann estimates Bella will be ready for adoption in about three months.

“I am just thrilled beyond belief that Bella has been rescued,” Reed said. “I’ve seen so many animals come through Maumelle Animal Services. I feel that Bella is now where she needs to be to get her health back, and that she will make some family a wonderful member one day.”