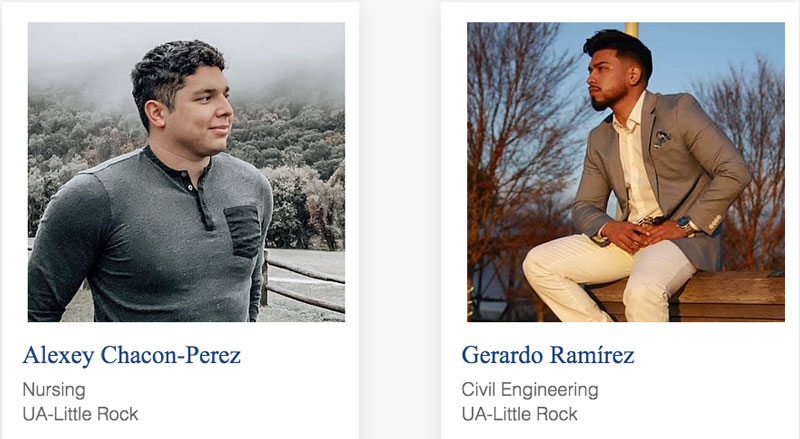 Seventeen University of Arkansas at Little Rock students have been awarded scholarships from the League of United Latin American Citizens (LULAC) 750 for the 2021-2022 academic year.

UA Little Rock’s students are among the 46 students from colleges and universities across the state selected for this year’s awards. The 17 students are receiving a total of $14,812, with some matching funds from UA Little Rock.

They will be honored during a virtual gala at 6 p.m. Dec. 3. LULAC will also recognize UA Little Rock once again as a premier Latino Destination Campus for the university’s continued support to the Latino community.

In addition to the gala, LULAC will hold a month-long celebration that coincides with Hispanic Heritage Month (Sept.15 to Oct. 15) and will include highlights of the recipients and sponsors on social media.

Four of the students will receive special scholarships. Jimena Balada will receive the Patricia Guardado Scholarship, awarded in remembrance of Patricia Guardado, a UA Little Rock sophomore who was studying international business at the time of her death. Her murder has never been solved, and LULAC has awarded a scholarship in her name every year to remember her and other students like her who want an education.

Alexey Chacon-Perez will receive the Richard Family Fund Scholarship, an endowed scholarship awarded to deserving Latino students attending UA Little Rock, where Terry Richard is a professor emeritus. The scholarship recognizes academic excellence and requires 15 hours of community service with UA Little Rock LULAC Council 771 or with another community agency that works with the Latino community.

LULAC seeks to empower the Latino community at the local, state, and national level through its seven councils chartered in Arkansas. The organization involves and serves Latinos of all national origins and focuses heavily on education, civil rights, and employment. Over the past 28 years, LULAC has awarded 596 scholarships totaling more than $1.3 million.

UA Little Rock was the first higher education institution in Arkansas to sign a Memorandum of Agreement with LULAC to create a partnership to recruit and retain Latino students on campus. Since 2006, UA Little Rock has provided a dollar-for-dollar match for students who receive scholarships from LULAC of Arkansas.

In the upper right photo, Alexey Chacon-Perez, a nursing major, and Gerardo Ramirez, a civil engineering major, are two of the 17 UA Little Rock students who received scholarships from LULAC this fall.