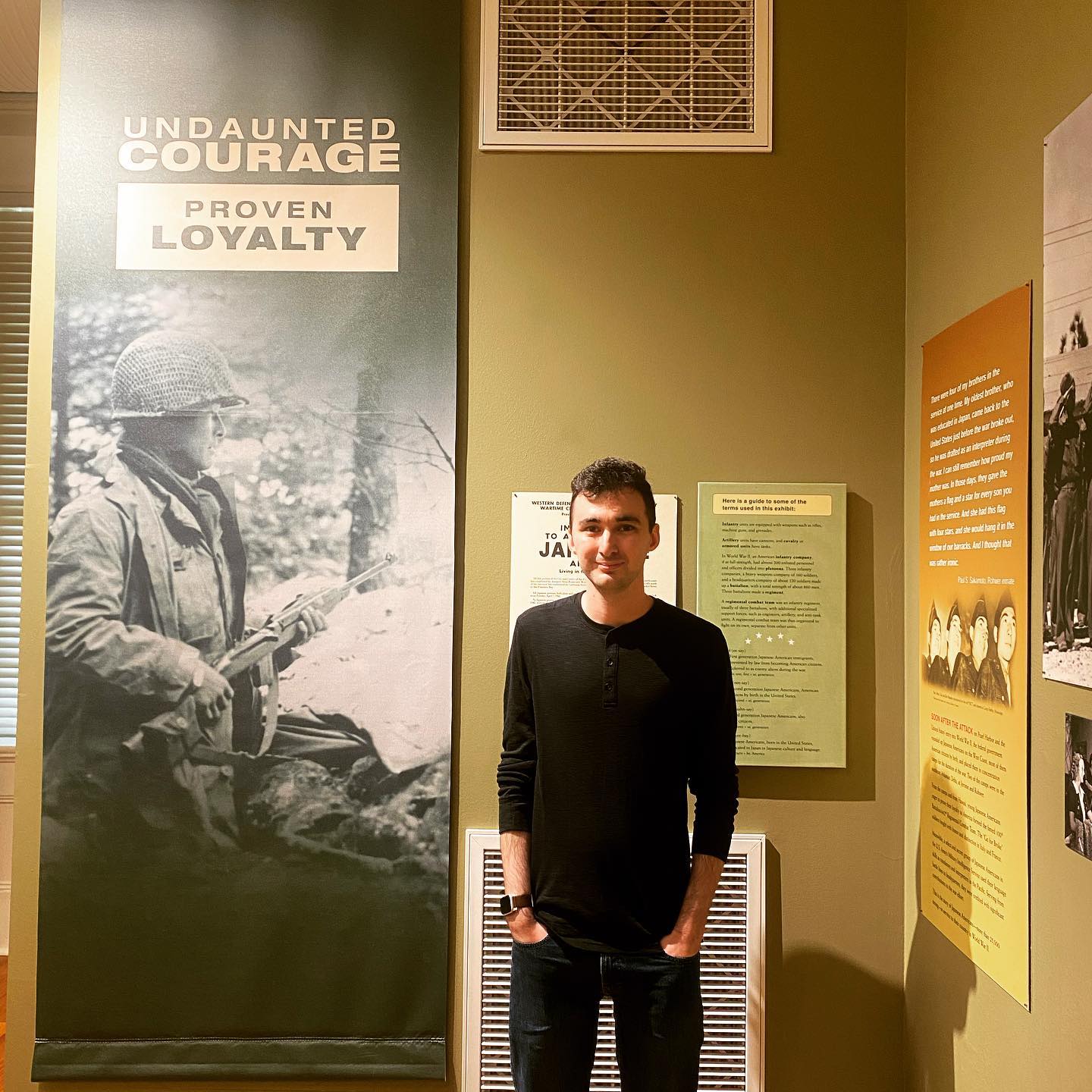 A University of Arkansas at Little Rock public history student has begun a new career running a living history program at the National Museum of the Pacific War, which provides the nation’s most comprehensive account of World War II in the Asiatic-Pacific theater.

Aaron Shuman, a native of Graham, Washington, recently moved to Fredericksburg, Texas, to start his new job as the museum experience coordinator at the museum, which preserves and exhibits the material history of the war in the Pacific and Indo-China during World War II.

“The public history program worked out really well for me,” Shuman said. “I have a graduate assistantship at the Clinton Presidential Library, and my supervisor introduced me to my summer internship at the MacArthur Museum of Arkansas Military History. The skills I picked up at both of those locations were critical to getting this job.”

The National Museum of the Pacific War’s Living History programs, housed in the Pacific Combat Zone, includes “Pride of the Pacific,” a live battlefield program, and “The Outposts,” an in-depth presentation featuring staff and volunteers in World War II uniforms or period clothing use artifacts and items from the museum’s collection.

“Pride of the Pacific” is a live-action performance featuring landing crafts, explosives, and flamethrowers as members of the museum’s own Company K. “The Outposts” includes discussions on weapons of war, Navy fighter planes, and communications during World War II.

“One of the museum’s buildings is the birthplace of Fleet Admiral Chester Nimitz, who led U.S. naval forces in the Pacific during World War II,” Shuman said. “The museum is a Smithsonian affiliate, and it’s comparable in size to the Clinton Presidential Library. The Pacific Combat Zone is very unique, and a lot of facilities don’t have a separate building for living history programs. You see tanks driving around and programs that use real flamethrowers. It’s not every day that you see these things that are 75+ years old and being used the way they were originally meant to be.”

Shuman’s new position is giving him a real living history experience. Not only does he get to use machines and weaponry from World War II, he has been temporarily lodged at the Ruff Haus, a building that has over 100 years of history and was built by the town’s original German settlers.

“I was in the Air Force, and I realized that I didn’t want to be an aircraft mechanic forever,” Shuman said. “As a kid, I played war board games with my dad and got very interested in the Second World War. I was stationed at Kadena Air Base in Okinawa and then I went to Little Rock Air Force Base. I looked for a public history program in Arkansas, and low and behold this very rare public history program was down the street.”

Shuman will graduate in December and is writing his thesis on the ways that presidential funerals reflect the lives and values of American Presidents. As he nears the completion of his master’s degree, Shuman is still surprised by how much his life has changed since joining UA Little Rock.

“Two years ago, I was changing tires on a C-1301, and now I’m running a public history program at a national museum in Texas,” Shuman said. “It’s crazy how fast things have changed. If UA Little Rock’s program didn’t have all these work opportunities to fill my resume, I don’t think this opportunity would have happened. I went from a mechanic to an academic in less than two years. I didn’t expect to get it done this quickly.”