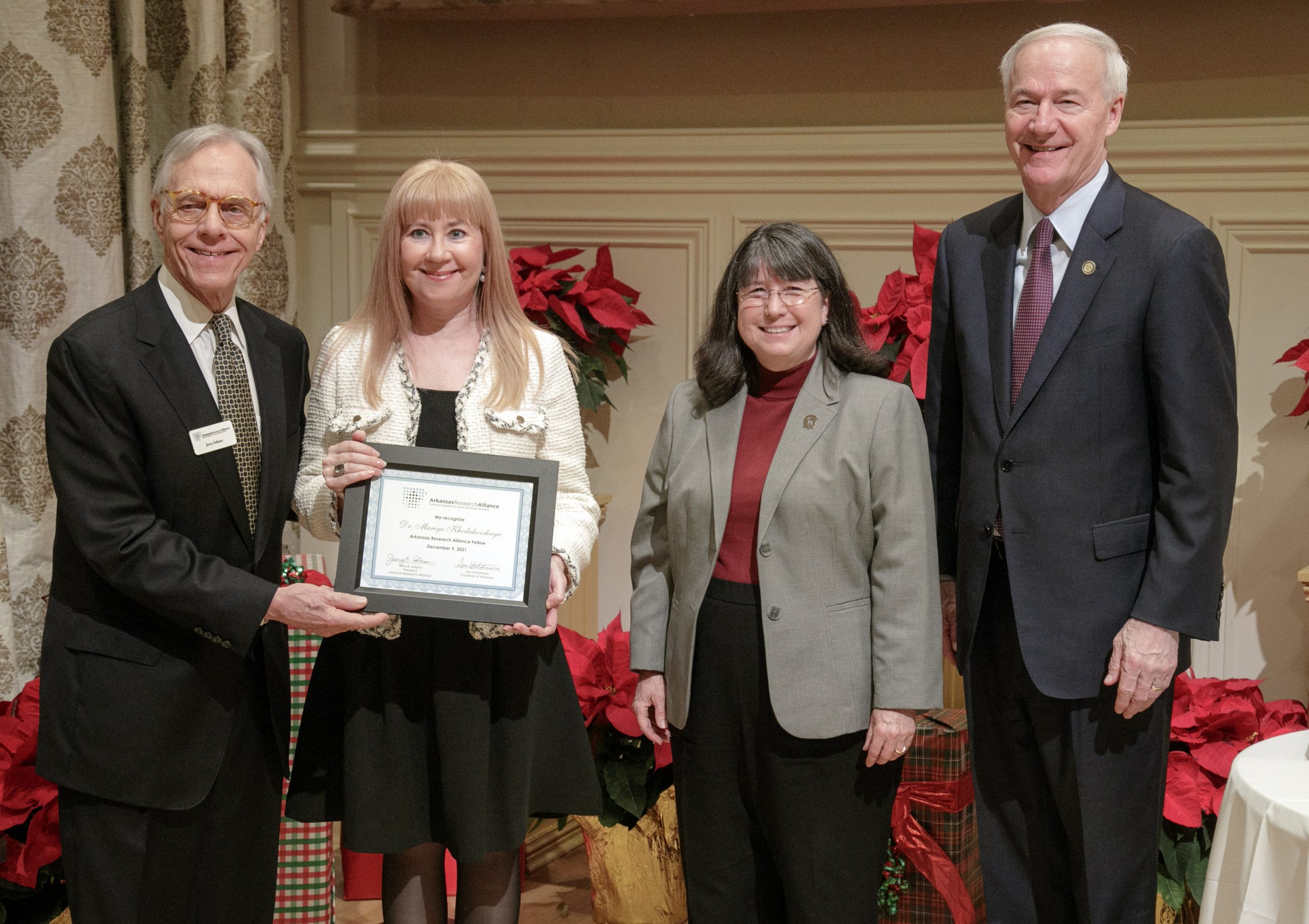 Dr. Mariya Khodakovskaya, professor of biology at the University of Arkansas at Little Rock, has been inducted into the Arkansas Research Alliance (ARA) Academy of Scholars and Fellows.

The induction of the new cohort of distinguished scholars and researchers took place during a Dec. 9 ceremony at the Arkansas Governor’s Mansion. The cohort is composed of two new ARA Scholars, which is the recruitment of strategic research talent from outside the state, and six ARA Fellows, which is a recognition of outstanding researchers already residing in the state.

“It is a big honor to join the Arkansas Research Alliance,” Khodakovskaya said. “I hope to be an efficient and enthusiastic contributor to cutting-edge interdisciplinary and inter-jurisdictional biological research with a focus on commercialization in Arkansas.”

Khodakovskaya, who is also the director of Applied Science Graduate Programs at UA Little Rock, has been honored as an ARA Fellow and will receive a $75,000 grant to continue her outstanding research, which focuses on improvement of agricultural and industrial plants using advanced methods of biotechnology and nanotechnology.

“We can celebrate the importance of research and the announcement of a record number of new scholars and fellows that will be doing research in Arkansas,” Gov. Asa Hutchinson said. “As a state, we do support the research of our higher education institutions because it brings innovation, it brings scientific discovery, it brings us steps forward in medical research. Through ground floor innovation, Arkansas research helps existing companies be more competitive and creates new startups, jobs, and patents that boosts the state’s high-tech economy.”

“ARA continues its mission to build the ARA Academy,” ARA President Jerry Adams said. “The members we’ve added today are truly representative of the enormous scientific talent that ARA is focusing on the future of the state of Arkansas.”

Khodakovskaya’s collaborations with material scientists, nanotechnologists, and other plant molecular biologists and biotechnologists resulted in the development of a unique research area in the intersection of plant biology and nanotechnology. She was the first person to demonstrate that carbon-based nanomaterials can affect plants at genomic and metabolomic levels, which activates genes involved in water transport, cell division, and response to environmental stress.

“Dr. Khodakovskaya is a true pioneer in the area of crop improvement by the application of a wide range of carbon-based nanomaterials,” UA Little Rock Chancellor Christina Drale said. “She and her research team developed innovative approaches for the enhancement of plant tolerance to environmental stress using advanced methods of genetic engineering, molecular biology, and nanotechnology. The key to her success is a collaborative interdisciplinary approach used in her research.”

Khodakovskaya’s recent research with the Arkansas Space Grant Consortium and NASA also holds potential to solve the problem of how to feed astronauts during long-term space exploration missions. An ongoing grant from NASA involves research to discover how to improve sustainability and stress tolerance in plants developed for exploration of Mars.

Since 2008, Khodakovskaya has been a principal investigator or co-principal investigator on grants totaling more than $10 million. Her research has been supported by grants from the USDA, Department of Defense, NASA, Arkansas Science and Technology Authority, and Arkansas Space Grant Consortium. She is the founder and CEO of Advanced Plant Technologies, an outgrowth opportunity to commercialize her research products.

“Her research is closely linked to the economy of Arkansas,” Chancellor Christina Drale said. “She is a co-principal investigator of a $4.5 million grant funded by NSF-EPSCoR, which is focused on identifying genes and mechanisms to improve resistance to high temperatures of rice, Arkansas’s primary crop.”

The additional new ARA Academy members include Philip Massey and Hugh Churchill, both of U of A; Edward Yeh and Alan Tackett, both of UAMS, Fabricio Medina Bolivar, A-State; Karl Walker, UAPB; and Laura Schnackenburg, NCTR.