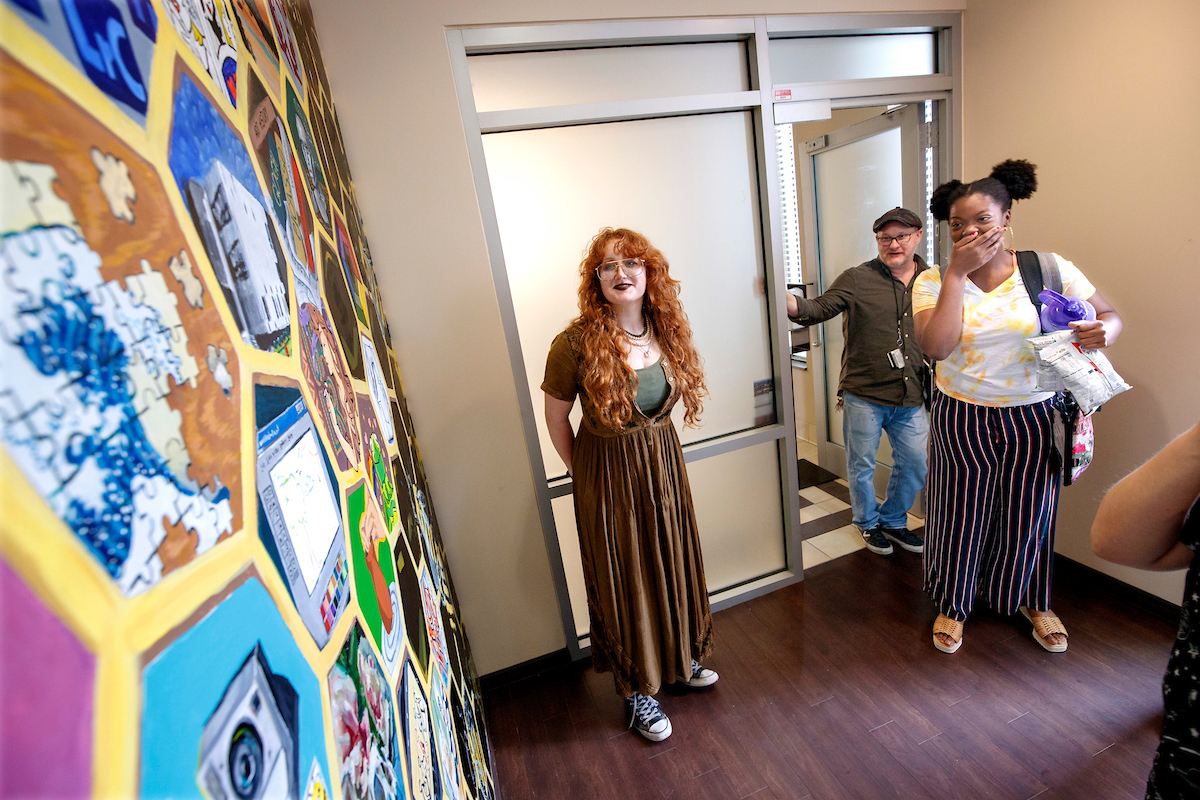 The University of Arkansas at Little Rock has unveiled a beautiful new art mural designed to bring inspiration to the students living in UA Little Rock’s newest living and learning community for art students.

The new mural, “Hive Mosaic,” was unveiled May 2. It is located at the entrance of the artWING living and learning community in West Hall and is meant to serve as inspiration for the art students who live there. The mural was created by Painting Professor Ricky Sikes and six artWING residents: Madison Heiderscheidt, Cecilia Ilg, Sunny Jenkins, Antonio Keyes, Gabriel Watson, and Hollee Wadley.

“We’ve been working on the mural since the beginning of the semester,” Sikes said. “I met with the students, and they brainstormed the idea for the mural. It was a collaborative artistic moment. It was a true learning experience and exciting experience overall. I got to oversee the students’ progress as they painted the mural. Every day was just as much a surprise to me as it was to the students.”

Sunny Jenkins, a freshman studio arts major from Little Rock, said the students decided that creating a mural in the shape of a honeycomb was the “most elegant way” to present the mural.

Some of the individual honeycombs contain pictures representative of campus life, such as the Windgate Center of Art and Design, books on art history, the Trojan head, and a woman painting a picture. Others are reminiscent of the mediums and tools students use to create art in their daily lives and studies, such as an old-fashioned camera, puzzle pieces, comic book scenes, and even Adobe programs.

“The mural was a lot of fun to work on collaboratively,” said Gabriel Watson, a sophomore graphic design major. “I feel all the time we spent really paid off in the end from the design phase to the final touches. I had a blast working on the mural. The idea behind our hive concept is linked to the honeybee, our state insect, and it made the idea for the mural so much stronger in the end.”

The artWING living and learning community, which started at the beginning of the 2021-22 academic year, is a collaboration between the UA Little Rock Office of Campus Living and the Department of Art and Design. It houses art majors located in the same area of West Hall.

“We (Andrea Tompkins and I) started talking about having a living and learning art community three years ago, and then COVID hit, delaying the opening of the residential community,” said Dr. Patti Light, director of campus living. “We talked about what we wanted to come from the community. We wanted the students to create something that would be long lasting, and the idea of a mural formed from that wish. With the creation of the first mural, it is now our hope that students will choose a space in artWING every year and create a new mural that will continue to inspire artists for years to come.”