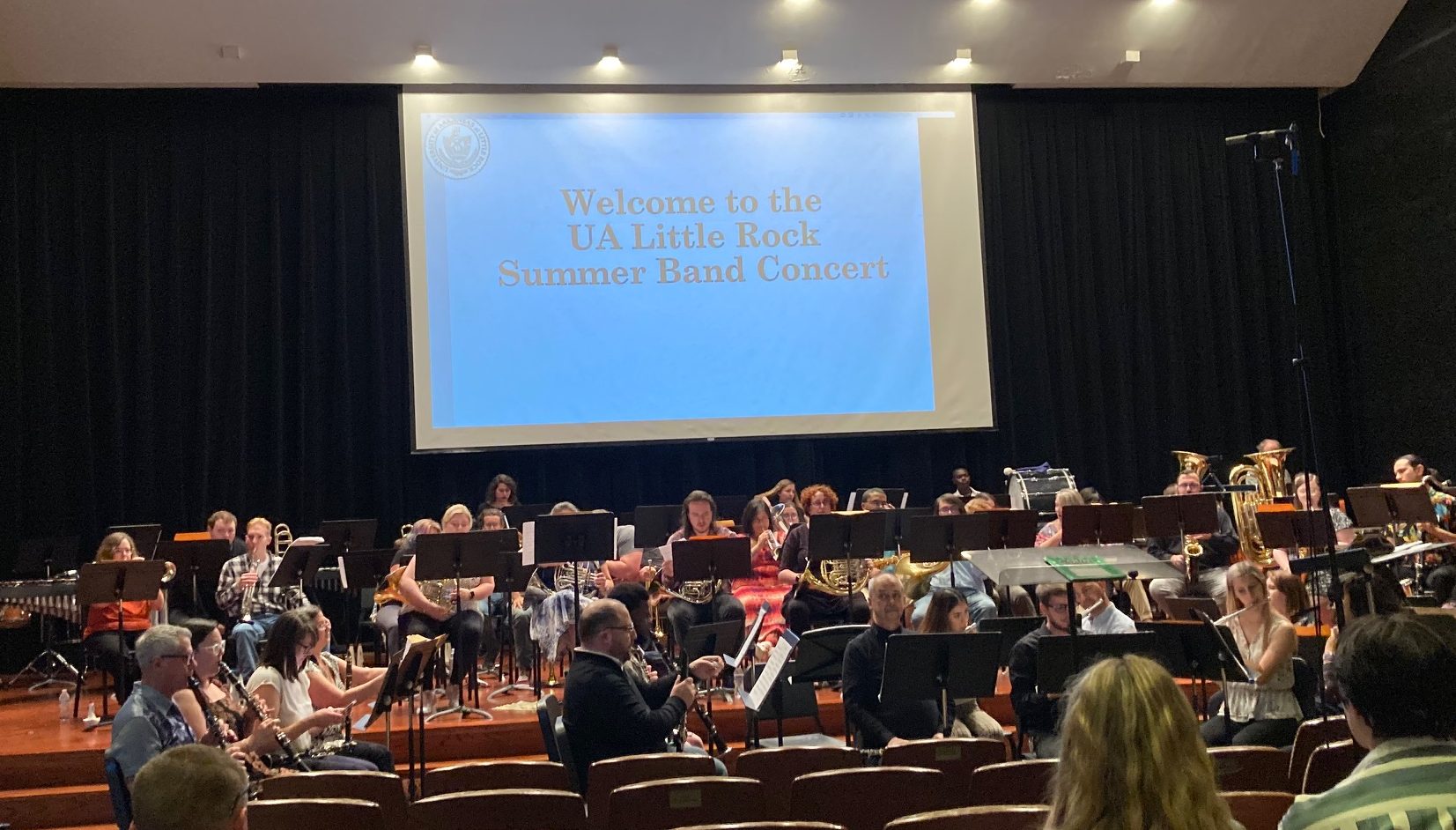 “I have missed it,” said Kenneth Goff, director of bands and professor of music education at UA Little Rock. “It’s really the highlight of my summer. I miss creating music and being around people. Since we haven’t had the summer band since COVID, I’ve missed it.”

Meredith Howard, a flute player from Beebe, joined the band with her sister, Leah, and son, James.

“My sister and I were involved in the band in 2019, the last year before COVID,” Howard said. “My son was always excited and asked when he could be in it. When we got the email this year, we were all so excited to get back to the band. My sister and I were in our high school marching band, and those are some of our best memories.”

The band member with the most years of experience is Judith Swinger, a Maumelle resident who retired from UA Little Rock in 2011. The retired accounting professor has been playing the euphonium since 1954 and has volunteered with the UA Little Rock Wind Ensemble for 15 years.

“I just support the band program,” she said.

In the tuba section, Matthew Mellor, principal at Lawson Elementary, found himself sitting next to Alex Alvarez, a UA Little Rock student. Mellor was Alvarez’s principal when he was a student at Daisy Bates Elementary School.

“One of the main things I remember the most is his Hot Wheels collection,” Alvarez said. “He was my favorite principal though.”

When Mellor was a principal, he had a collection of more than 1,000 Hot Wheels toy cars. He used to invite the exceptional students to his office to discuss their achievements and see his collection.

“When you’re a grade school principal, it’s often only the kids who are in trouble that come to your office,” Mellor said. “When kids are good, they got to come to my office to trade cars. This allowed me to keep in touch with good kids like Alex.”

Mellor joined the Summer Concert Band with his daughter, Emily Gaines, band director at Central Arkansas Christian. Mellor and his wife, a music teacher, have four children, three of whom were music majors. Gaines, a UA Little Rock alum, loves being in the band to spend time with her family and learn more about music.

“It’s really a lot of fun,” Gaines said. “As a band director, it gives me things I can bring back to my students. I always try to play in community bands because I think it’s good for me as an educator.”

The band member who traveled the farthest to participate is Izzy Ward, a sophomore engineering major and Donaghey Scholar who traveled 118 miles each way to take part in rehearsals and the final performance.

“The drive is worth it,” Ward said. “I’ve made a lot of friends. I do band as a stress reliever. When I heard they were bringing the summer band back, I thought it would make up for lost time since I wasn’t able to perform in the Wind Ensemble this year.”