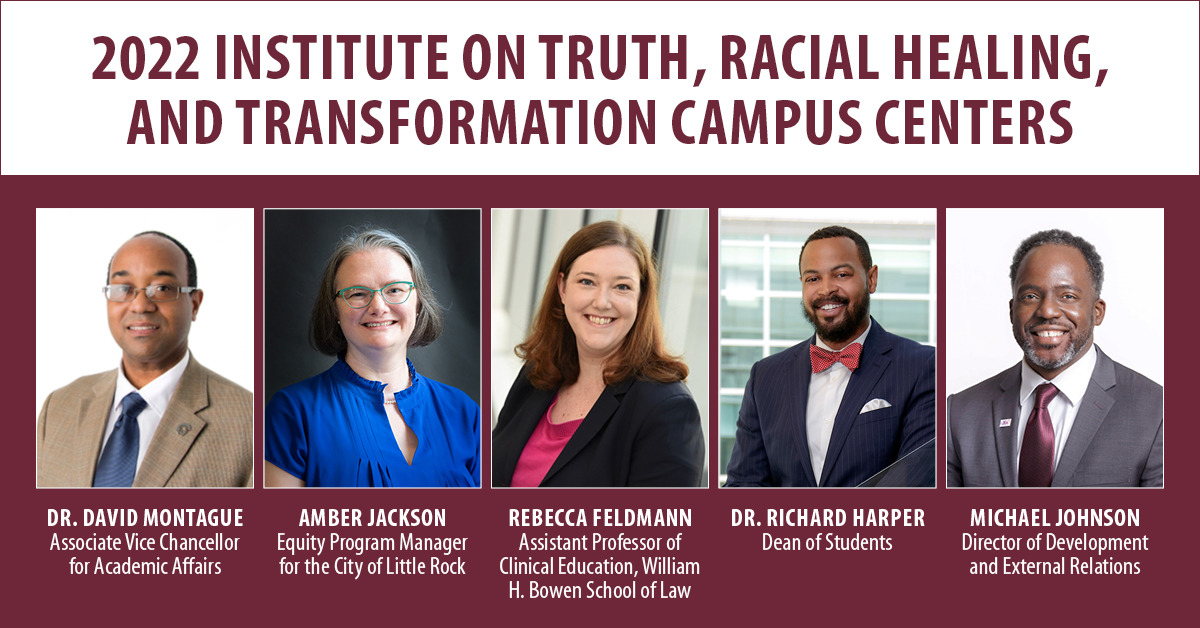 The University of Arkansas at Little Rock is one of 75 higher education institutions across the country that has been chosen by the Association of American Colleges and Universities (AAC&U) to participate in the 2022 Institute on Truth, Racial Healing & Transformation (TRHT) Campus Centers.

A team of employees from UA Little Rock and the City of Little Rock attended a virtual training June 21-24 to learn the TRHT framework and create an action plan to create a new TRHT Campus Center at UA Little Rock.

The TRHT Campus Center Initiative Training prepares the next generation of leaders and thinkers to break down racial hierarchies and to dismantle the belief in a hierarchy of human value. The program is based on five pillars – narrative change, racial healing and relationship building, separation, law, and economy. Each center implements its own visionary action plan, based on the TRHT framework, to promote racial healing through campus-community engagement.

“The growing importance of, and the need for, truth-telling, narrative change, and racial healing is evident by the number of institutions that elected to attend the institute,” said Tia Brown McNair, AAC&U vice president for diversity, equity, and student success and executive director for the TRHT Campus Centers. “We remain humbled that our colleagues continue to partner with us on this effort to build more just and equitable institutions and communities.”

In preparation of applying to be accepted for TRHT training by AAC&U, UA Little Rock team members consulted with TRHT Campus Center employees at the University of Arkansas and Oklahoma State University-Tulsa.

Institutions were selected based on their vision for their Campus Center, the demonstrated commitment of leaders on campus and in the community to the goals of the Truth, Racial Healing & Transformation framework, and their ability to provide evidence for the need of a Campus Center in their community.

“UA Little Rock has a strong history and commitment to using and leveraging data to assess problems and how they might manifest themselves within the community and on campus,” Montague said. “A more recent 2021 Campus Climate survey of faculty, students, and staff revealed some disheartening, but poignant information about issues of diversity, equity, and inclusion (DEI) on campus. We have a diverse student body, and we want to have something that reflects Little Rock’s important history in the civil rights movement. Our hope is for the center to serve as a catalyst for various campus and community initiatives.”

The Truth, Racial Healing & Transformation Campus Center training and network is administered through the American Association of Colleges & Universities in partnership with the W.K. Kellogg Foundation and Newman’s Own Foundation.

In partnership with the City of Little Rock, the campus center at UA Little Rock will use truth, racial healing, and transformation as a means to change both the city and university’s cultural competency.

“We are excited to participate in this Truth, Racial Healing, and Transformation training and support the work of the UA Little Rock team as they engage their campus community in the critical work of DEI,” Jackson said.

The center’s mission is to deepen the community engagement footprint by strategically strengthening our commitment to robust economic development, social justice, and an increased focus on BIPOC student and faculty recruitment and retention.

“We want people to come together to share their lived experiences, no matter what that may be,” said Dr. Melvin Beavers, the Chancellor’s DEI fellow. “The center creates a safe place for people to talk about race and racism where people won’t be judged.”