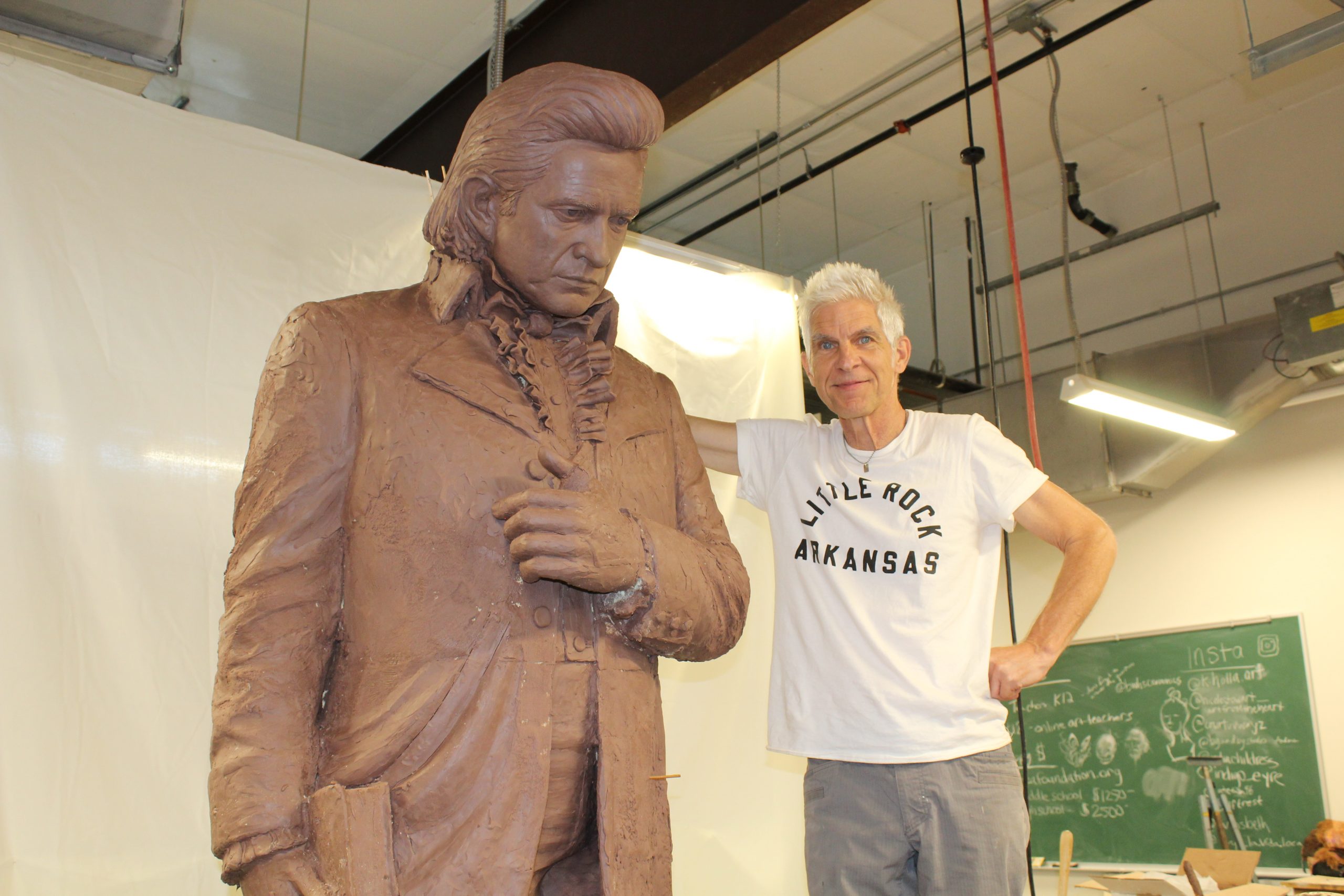 UA Little Rock alumnus and famed Arkansas artist Kevin Kresse has spent the past year of his life taking on a monumental task – creating an 8-foot-tall statue that will capture the life and legacy of country music icon Johnny Cash.

Once complete, this bronze statue will grace the halls of the U.S. Capitol Building in Washington, D.C., where statues representing our nation’s best reside for all to see.

Kresse, of Little Rock, showed off his work while visiting with members of the public July 25-28 at the Windgate Center of Art and Design at UA Little Rock and was moved by the community’s reaction to his work.

“So many people came through, and it was a very rewarding experience,” Kresse said. “I had some people who got emotional seeing it, and that’s always a good sign in my business. It’s difficult assessing your own work when you are in the middle of it. I’m at a point where I am feeling very happy about the piece.”

Members of the community were fascinated by Kresse’s work. Klansee Tozer, a senior graphic designer at UA Little Rock, said she and her daughter, Lani, were blown away by seeing the clay model of the statue up close in person.

“Walking in, it was very big, massive is what came to mind,” Tozer said. “Seeing it up close, I could see the texture of the clay and how he worked his magic to form this realistic image of Johnny Cash. It was very breathtaking. I am just impressed by Kresse’s talent, and that Arkansas is being represented by this great UA Little Rock artist.”

Arkansas currently has statues of attorney Uriah Rose and U.S. Sen. and former Gov. James Clarke on display at the U.S. Capitol. Both statues are more than a century old. In 2019, the state legislature approved legislation replacing them with statues of Cash and Daisy Gatson Bates, a renowned civil rights activist. Gov. Asa Hutchinson created the National Statuary Hall Steering Committee to oversee the replacement of the state’s two statues. The committee selected Kresse to create the Cash statue in June 2021.

Born in 1932 in Kingsland, Arkansas, Cash moved with his family at age 3 to live in the Eastern Arkansas farming community of Dyess, which was created in 1934 as part of President Franklin Roosevelt’s New Deal program. Arkansas State University restored the Cash family home and opened it as a museum in 2014.

Kresse’s statue represents Cash during the golden age of his career while he starred on “The Johnny Cash Show” that aired on ABC from 1969 to 1971. In the statue, Cash carries a guitar on his back and a Bible in his right hand.

“It was kind of a golden time for Johnny Cash,” Kresse said. “He was healthy and happy, and it seemed like an appropriate time frame. The guitar on the back was an iconic image of Cash. Having the Bible in his hand at his side felt appropriate. His faith was such an integral part of who he was, but he never pushed it on people. I also didn’t realize until I was well into the project that he was actually an ordained minister.”

Kresse’s clay model of the Cash statue is nearing completion and will be delivered to the Crucible Bronze Foundry in Norman, Oklahoma, on Aug. 8. The foundry employees will review the clay model for technical issues before creating molds for the final bronze statue. State authorities plan to unveil the statues of Cash and Bates during a December ceremony in Washington, D.C.

Cash’s family has also been involved in the creation of the statue, providing Kresse with stories about Cash as part of his research as well as providing feedback on photographs of the sculpture in process.

Roseanne Cash, a singer-songwriter and Cash’s oldest daughter, saw the upper part of the statue for the first time on May 6, when she received an honorary doctoral degree from Arkansas State University for her support in preserving the Cash childhood family home.

“The Cash family is happy,” Kresse said. “Whenever I do a posthumous piece, my biggest goal is to make sure the family is happy because they are the ones who know the subject the best. I was able to show Roseanne (Cash) the bust back two or three months ago. She had an emotional reaction to the piece. That was a very rewarding experience.”