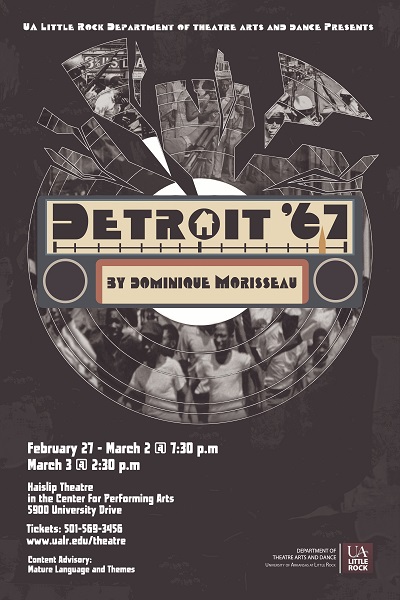 Please join us this week for Detroit ’67, by Dominique Morisseau, produced by the Department of Theatre Arts and Dance at UA Little Rock. This Kennedy Prize-winning drama opens this Wednesday, February 27 and plays through Sunday, March 3.

Set during the “long hot summer” of 1967, Morisseau’s play centers on a sister and brother who open an after-hours club in the basement of their late parents’ house. As the social bonds around them break down, the family ties are also strained: the siblings discover that their dreams have diverged, their tight-knit community is imperiled by the presence of a mysterious outsider, and the city around them erupts into violence. The music of Motown propels this achingly relevant drama, becoming “the raw emotional soundtrack of a community sick and tired of being sick and tired.”

All performances are in the Haislip Theatre inside the Center of Performing Arts.
+Goolgle Map > 5900 University Drive. Little Rock, AR 72204 (Building 16)

Performances are Wednesday through Saturday at 7:30 PM, and Sunday at 2:30 PM.
Tickets are $5 for all UA Little Rock students, staff and faculty, $5 for Seniors and Military, and $10 for the general public. Buy tickets online >  or make reservations at (501) 569-3456
[Content Advisory: Mature language and themes]

All pre-show discussions are free to the public. We encourage you and your students to attend.

Please pass the word! We look forward to seeing you at Detroit ’67!