My semester with Bernie Babcock

During the fall of 2015, I enrolled in a course that required a service learning assignment. The search was on to pick an option provided by my professor. I chose to fulfill my ten hours in the research room of the Arkansas Studies Institute building looking through a collection held by the UALR Center for Arkansas History and Culture. The project I worked on was a review of the diaries of Bernie Babcock, an influential Arkansas woman of the early 1900s.

Babcock’s 1936 and 1937 diaries are full of hope and well wishes for her loved ones and friends. The 1936 diary begins with Babcock saying she has to hurry and finish her book, Little Boy in Two Worlds. One thing I found interesting was that though Babcock was sixty-eight years old, she still managed to blaze a trail within and across state lines. In one instance, Babcock traveled from Hot Springs, Arkansas, all the way to New Orleans, Louisiana.

Bernie Babcock even went to the movies. One movie in particular that she mentioned in her diary was Kentucky starring Will Rogers.  Babcock also meets President Roosevelt’s wife Eleanor at a breakfast meet and greet. 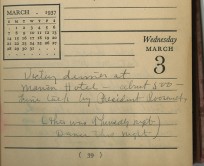 Later, in her 1937 diary she meets the big man himself, President Roosevelt, at a dinner at the Marion Hotel in Little Rock with other invited guests.

In her 1940 and 1941 diaries, she writes a New Year resolution that would bring anyone to tears. During these entries in her diaries, she meets her first grandchild named Carol Judith by daughter Barbara.

During this time Babcock runs into some copyright trouble with her new book, For Men Only. Babcock’s schedule becomes filled with attending Author Society events, Pen Women Meetings, and movies. This time Babcock goes to the movies to see Gone with the Wind, which at the time tickets were hard to come by. All during this time Bernie is an employee of the Federal Writer’s Project, working on numerous projects, one being the Arkansas Guide Book. 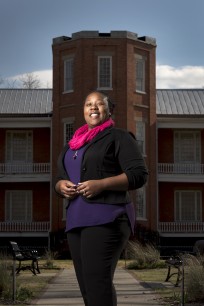 Jaztone Brewer stands front of the Arsenal Building at MacArthur Park. This building was previously home to the Museum of Natural History and Antiquities which opened under the leadership of Babcock in the 1940s after being moved out of Little Rock’s City Hall.

One thing that remains a mystery in Babcock’s diary entries is the symbol she uses when she goes to the countryside. The symbol that she draws is a triangle with a dot in the middle. I have tried to find out what the symbol indicates, but Babcock’s hieroglyphics seem too advanced for my twentieth-century brain.

I felt so lucky to have been given the privilege to peep through the thoughts of one of Arkansas’s great women.

Jaztone Brewer will graduate spring 2016 with a BA in English and a History minor at the University of Arkansas at Little Rock. She plans to pursue a career in public service.