The UALR Center for Arkansas History and Culture (CAHC) has received a $10,424 grant award from the Arkansas Humanities Council for a project focused on the political history of Arkansas titled, No Laughing Matter: Political Cartoons and the Arkansas Historical Perspective. 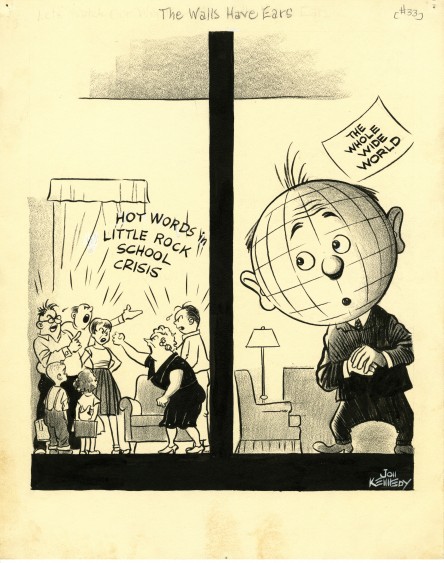 The project includes the creation of a virtual exhibit to examine the interaction of politics and history in Arkansas and will feature a selection of original works by local political cartoonists Jon Kennedy (Arkansas Democrat, 1941-1988) and Bill Graham (Arkansas Gazette, 1948-1985). Accompanying materials from related collections in CAHC’s holdings, such as the Winthrop Rockefeller Collection and Dale Bumpers Gubernatorial Papers, will be used to provide contextual information for the project.

Topics featured will include, but are not limited to, voting (local and national elections); education funding and desegregation of schools; urbanization and economic development; prison reform; and local gambling legislation. Additionally, lesson plans and educational materials for teachers will be designed and made accessible within the exhibit.

The project will culminate with an educational symposium dedicated to the discussion of pictorial cartoons and political opinion in Arkansas.  Scholars representing various humanities disciplines will present background material and facilitate discussion during this free event in the fall of 2016.