The University of Arkansas at Little Rock Center for Arkansas History and Culture (CAHC) today announced the opening of the James Guy Tucker Jr. Papers.

Tucker’s collection spans nearly 600 cubic feet of materials, including letters, legislative documents, legal papers, campaign materials, and photographs that cover a wide range of political, social, and economic issues of national and international importance. They richly document the life and career of this accomplished progressive southern Democrat who tried to balance the interests of Democrats and Republicans amid a rapidly-changing national political landscape.

“Gov. Tucker’s papers offer researchers and students a one-of-a-kind source for research and insight into the life of a successful Arkansas politician as well as larger questions surrounding a southern governor during times of political change,” said Dr. Deborah Baldwin, director of the center and UA Little Rock’s interim provost. 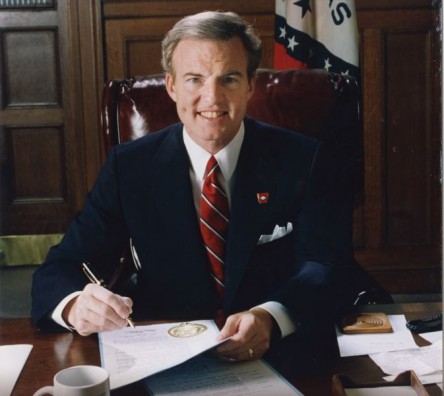 The papers strengthen UA Little Rock’s political research collections and the university’s contribution to scholarship and exploration of the state’s history and importance, added Baldwin.

Tucker’s collection is one of the largest at the center and joins other important collections of former Arkansas governors, including Carl Bailey, Winthrop Rockefeller, Dale Bumpers, and Frank White.

Materials in the Tucker collection document his personal life and political career, during which he served as the state’s 43rd governor from Dec. 12, 1992, to July 15, 1996. His papers include correspondence, photographs, memorabilia, books, and audiovisual material from his time as prosecuting attorney, attorney general, U.S. congressman, chairman of the White House Conference on Families, lieutenant governor, and governor, and from his post-gubernatorial activities.

Additionally, there are materials from the Tucker and White families and items from Jim Guy Tucker, Jr.’s early life, including letters written by his mother during the Little Rock Central High School integration crisis, Harvard University ephemera, and the manuscript of “Arkansas Men at War.”

The two-year project included developing a detailed description of the contents of each folder, preservation of the materials in acid-free containers, the creation of an industry-standard online finding aid that allows researchers around the world to view the contents of the collection, as well as a virtual exhibit (https://ualrexhibits.org/tucker/).

The virtual exhibit explores the collection and Tucker’s career. Readers can learn of Tucker’s family history; however, the bulk of the collection and the exhibit involves Tucker’s political career and achievements, as well as an entertaining look at the jingle used in his lieutenant governor campaign. An extensive media gallery with more than 200 digitized photographs from his childhood to his governorship will be available. An interactive timeline will use his papers to take readers on a journey through his life, and teachers and students will enjoy the educational materials provided.

The exhibit is made possible through a $136,851 grant from the National Historical Publications and Records Commission (NHPRC), part of the National Archives and Records Administration, making it the largest NHPRC award in the state to date.