Welcome one of the CAHC’s newest Graduate Assistants, Acadia Roher! 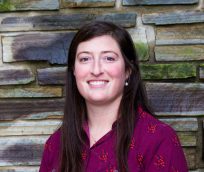 This semester, Acadia Roher transitioned into a Graduate Assistantship at the UA Little Rock Center for Arkansas History and Culture. She previously worked with us as an archival assistant on the Mapping Renewal project funded by the NEH. Her role with the project has continued, but instead of long days of digitizing photographs Acadia is now developing spreadsheets full of metadata for each of the digital files that will end up on the interactive map. She also composes blog posts that highlight the digitized maps, photographs, reports, and architectural plans. She hopes to draw scholars’ attention to major themes and possible research topics that can be explored using the future Mapping Renewal platform.

Acadia came to public history via a winding path that has included environmental studies and sustainability, community organizing, urban farming, nonprofit capacity building, genealogy, and popular education. The Mapping Renewal project taps into many of her overlapping interests, allowing her to delve into the history of the ways power has played out on the landscape and the people of Little Rock.

Acadia grew up in Little Rock and New Orleans, Louisiana and has degrees from Barnard College and the Clinton School of Public Service.

Outside of school, work, and organizing, you can usually find Acadia helping out at community gardens in the 12th Street area, swimming in a creek, or journalling while snuggling with her cats Julius and Olive.