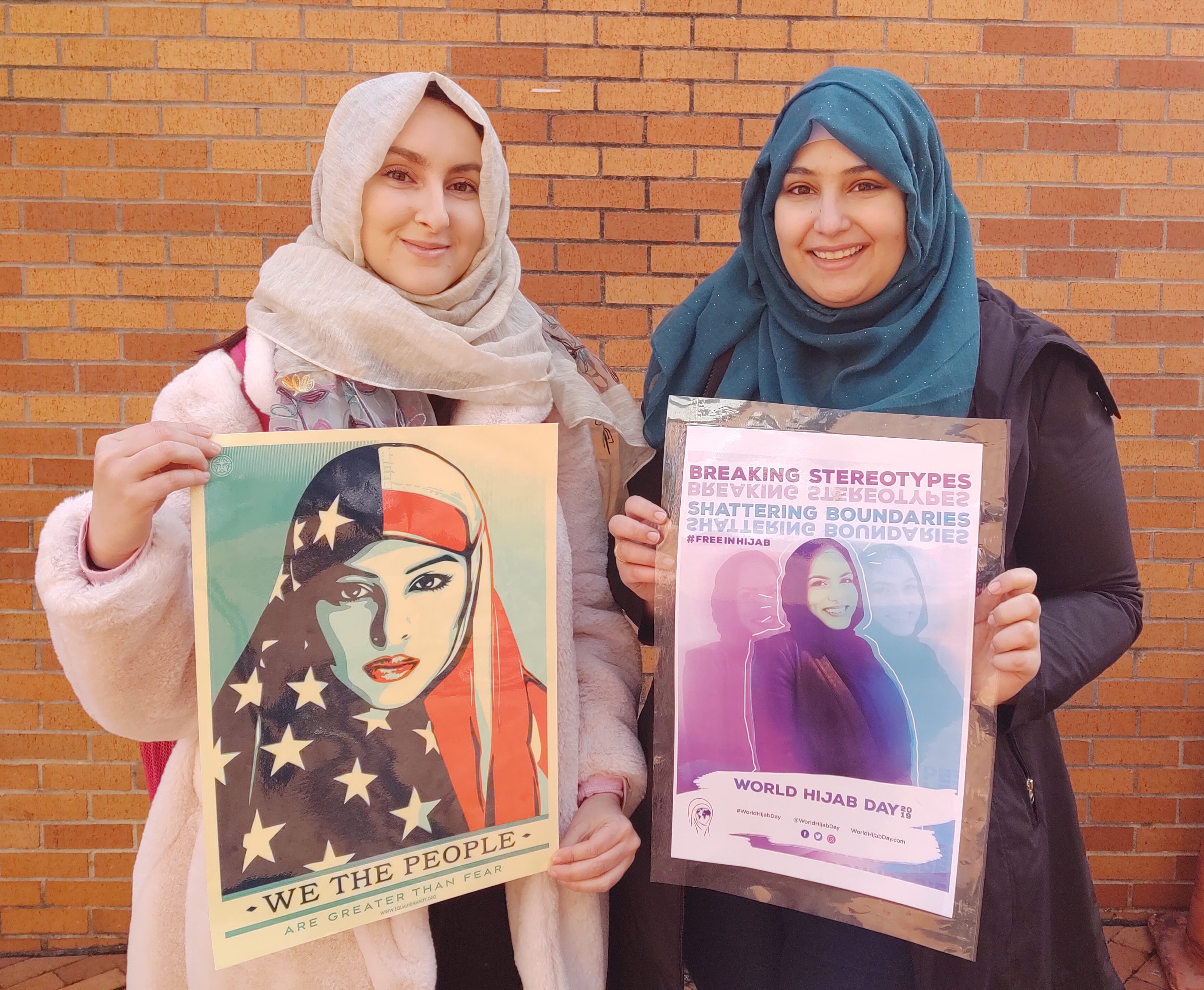 World Hijab Day is a global event that began in 2013 in recognition of millions of Muslim women who voluntarily choose to wear the hijab and live a life of modesty. World Hijab Day is an invitation to people of all backgrounds to experience the hijab for one day as a way to understand its meaning and encourage religious understanding and international solidarity.

Hundreds of scarves were donated by Muslim women in the Little Rock community for the event. UA Little Rock participants were invited to choose a scarf to wear as a hijab. A Muslim Student Association member helped participants put on the hijab and then take a photo together.

Sociology and gender studies major Kaylie McQuay said she has been preparing for her upcoming summer expedition to Comoros, a country of islands off the east coast of Africa with many Muslim residents.

“We cover our heads, but not our minds,” said Aya Zaki, an interdisciplinary studies graduate student majoring in English literature and psychology. “We do it as an expression of modesty.”

Muslim Student Association vice-president Monnar Quattom, a psychology major, noted that every major world religion has a history of wearing a head covering. Head coverings, including the hijab, represent a voluntary choice to live in modesty.

The hijab has been very important to the history of Islam as a means to promote dignity and respect for women.

“One thing I really like about wearing the hijab every day is that it helps people get to know me for what’s on the inside,” Quattom said. “Wearing the hijab also makes me feel more connected to God.”

Amina Tasneem, a biology major, stressed the importance of asking questions as a way to clarify misunderstandings about religious beliefs and practices.

“Always ask all of the questions you have about Islam. It is not rude to ask,” Tasneem said. “People tend to tip-toe around sensitive topics and say things like ‘no offense’. Instead, talk to me so that I can respond with what information I know.”

A balloon launch took place at 12:30 p.m. in honor of Muslim women around the globe who have been victims of physical attacks and policy discrimination because of their choice to wear the hijab. Participants wrote the names of friends who wear the hijab on white balloons, as well as statements that reflect their views. These messages include #EndDiscrimination, “Women Can Wear What They Want,” #Respect, #NoHate, “Never Give Up,” “Hijab is Beautiful,” and #UnityInDiversity.

“This has been the highlight of my day,” said Paxton Richardson, a social work graduate student. “I am here especially for the balloon launch. I like that we are putting positivity into the world.”

Marcus Vasquez from the Office of Campus Living agreed.

“The balloon launch is nice. I like the idea of physically releasing a ballon as a metaphor of releasing positivity into the atmosphere toward ending discrimination,” Vasquez said.

Paxton, Vasquez, and McQuay also mentioned their appreciation for the inclusiveness of World Hijab Day and being able to support the Muslim Student Association and women around the globe who wear the hijab.