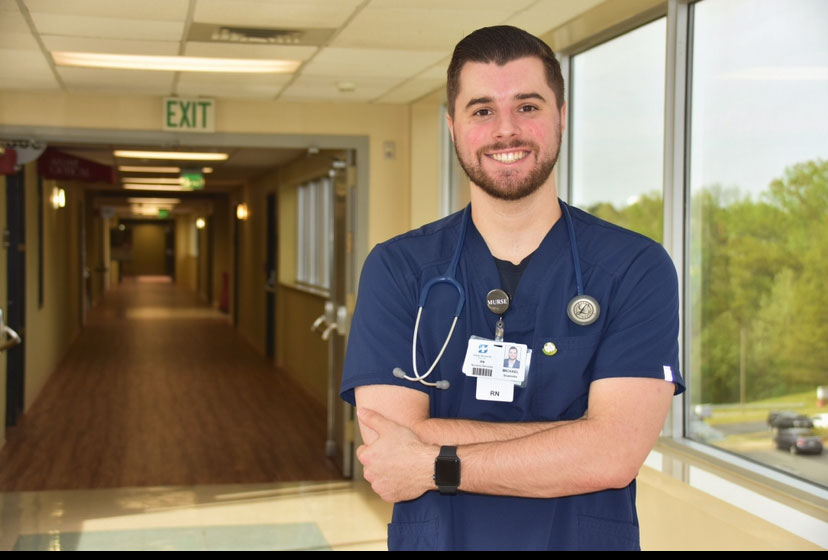 A University of Arkansas at Little Rock nursing graduate is grateful for the skills he learned at UA Little Rock that are helping him protect patients during a global health crisis.

Michael Stramiello, a 2018 graduate of UA Little Rock, moved halfway across the country from West Orange, New Jersey, to Arkansas when he was just a kid. Yet, he is the only member of his family to remain in Arkansas and has made his home in Benton, where he works as a registered nurse in the Medical Surgery Department at Saline Memorial Hospital.

During high school, Stramiello was a rising basketball star, and some schools had shown interest in recruiting him to play college ball. Unfortunately, his passion for basketball ended in several injuries, including a torn ACL and a busted kneecap. The teen endured several surgeries between ages 17 and 19 to repair his knee.

“It was a blessing in disguise, because it stopped me from going to play basketball at a smaller school, where I may never have gone into nursing,” Stramiello said. “It also translated into me becoming fully committed to academics.”

Although Stramiello developed a familiarity with hospitals that few of his friends had at such a young age, his time in the hospital left him with a desire to go into healthcare.

“When I was in the hospital, the nurses were always very generous and compassionate,” he said. “They made the biggest difference in my stays, and that translated into me wanting to be a nurse when I got older.”

After graduating from Abundant Lights High School in Sherwood, Stramiello joined UA Little Rock in 2014, though not originally as a nursing major.

“I was looking for a good school with a biology program,” he said. “I knew I wanted to go into medicine, and UA Little Rock had a very good program. During summer 2016, I was able to shadow a doctor at Saline Memorial. I wanted to see how things in medicine worked. I really enjoyed working with nurses, who get to know the patients more than any other person at the hospital. That is something that intrigued me. After I did the shadowing and got to see what our program offered, it was a no brainer to go into our nursing program.”

Stramiello is thankful to the UA Little Rock nursing program for helping transform him into a confident and skilled nurse.

He joined Saline Memorial on Oct. 1, 2018, and loves the close-knit community.

“I shadowed healthcare workers at Saline Memorial, and I really liked the hospital,” Stramiello said. “It’s one of the reasons I chose this hospital. I love the environment. It’s a smaller hospital with a great family feeling. It’s a great place to be and grow.”

Like all healthcare workers, Stramiello’s job has shifted during the COVID-19 pandemic.

“I think everyone’s nursing job changed because of the pandemic,” he said. “We are getting screened and our temperature checked every day we come into the hospital so we can keep everyone safe. We’ve had a great recovery rate in Arkansas, which is very promising. What’s happened in our neighboring state of Louisiana is sad. They are about the same size as us, but have had so many more cases. I think people in Arkansas did a good job listening to social distancing messages, and it could have been a lot worse if they didn’t.”

In his free time, Stramiello loves music and serves as a music director at Benton First United Methodist Church. A video of him playing the guitar and singing to patients can be seen here.

In his nursing career, Stramiello is already known for his acts of kindness. In 2019, he received the DAISY Award for Extraordinary Nurses, which recognizes the super-human efforts nurses perform every day. The DAISY Award was established in 1999 by the family of a patient who had received extraordinary care and compassion from his nurses during his final days. A patient nominated Stramiello for the award after witnessing his hard work and kindness during the 2018 holiday season.

“This nurse has worked every night this holiday season,” the patient said. “He volunteered to work to allow those with families time to be home for the holidays. He has been very patient and kind during my entire stay. All of the staff was good to me, and my stay was nice even during the holiday. Out of everyone, Michael stands out for his kind and caring manner. His positive outlook and encouraging words helped me so much during a stay that lasted a week during the holidays. He is a humble and dedicated nurse who thinks first of his patients and coworkers. I pray he is given credit and honor for a job well done.”

Stramiello has a message for his fellow nurses in honor of National Nurses Week.

“I want to thank nurses for what they are doing in times like this,” he said. “I know it has been a very hard time in nursing. I want them to know how much they are appreciated and how much they make a difference in people’s lives.”