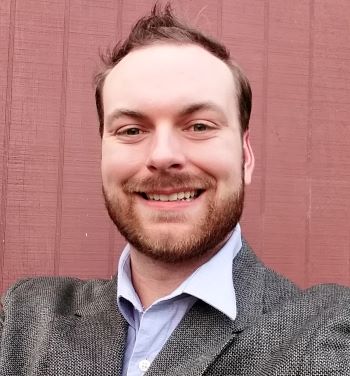 Dylan Treadwell, a third-year student at the UA Little Rock William H. Bowen School of Law who is graduating this semester, has combined his passion for storytelling and his class research to create a presentation that has gained regional attention.

Treadwell presented his paper, “The Postmodern Far-li-mas, Companion in Life: A Case for Hip-Hop’s Narrative Influence in Legal Decision and Policy Making,” March 12 at the LSU-Shreveport Regional Student Scholars Forum.

So, who is Far-li-mas, what does he have to do with hip-hop music, and how does any of it tie into the legal system?

Far-li-mas is part of north African mythology. He is the king’s slave, but even the king is a slave to the movement of the stars in the sky, which were studied and interpreted by the priests. The entire society, even the length of the king’s life, was governed by the cold logic of the stars.

Far-li-mas has a reputation as a talented storyteller. The royal family and their slaves, who had been condemned by the stars to die, challenge the priests to listen as Far-li-mas tells stories. The priests become so engaged that they forget to watch the sky. They lose track of the law, and society is turned on its head. The priests seek to kill Far-li-mas, but he prevails and a new equilibrium is established.

Treadwell learned of Far-li-mas before he arrived at Bowen. With a background in filmmaking and experience in news media and public relations, he considers his passion to be spinning stories. That led to his interest in comparative mythology, which is looking at different cultures’ stories and religions and how they tell the larger story of humanity.

“What you find is that everything is a story,” Treadwell said. “From science to law, to history, to how we interact with our family and with each other. We think in story.”

During his final year of law school, Treadwell enrolled in Professor andré cummings’ course, Hip-Hop and the American Constitution. While this is a new class at Bowen, Professor cummings has literally written the book on it. He also lectures frequently on the topic.

Treadwell’s assignment for class was a 25-page research paper connecting hip-hop music to legal topics. However, he was intrigued by the criticism of the hip-hop genre as a whole.

“It’s tempting to all professionals to listen to only those in your group. We wonder why we should listen to laypeople tell their stories, especially stories that we may consider to be angry, provocative, profane, and bombastic,” he said. “And should we let those stories influence what the law should be?”

Treadwell set out to make a case for personal narrative being something that could hold its weight in a courtroom and be used in an ethical and logical way.

His article explores how hip-hop artists expose problems in society, or in the justice system, and how it’s the job of legal professionals to find the solution.

“Hip-Hop artists are the post-modern Far-li-mas. The stories they present are constructive rallying cries to communities. They offer real, existing problems and a dream of how things should work,” Treadwell said. “It’s up to legal professionals to find a way through the problems and make the solution possible. We can’t throw out a story because it doesn’t offer a roadmap to the solution.”

Far-li-mas and hip-hop also share the same theme: the battle between cold logic and the stories of people.

Treadwell uses the Far-li-mas legend to illustrate the hopes and fears of many in American society. It is a hopeful story for those at society’s bottom who have stories to tell and a cautionary tale of irresponsible, unethical storytelling for those at the top who are desperate to maintain the status quo.

“Dylan’s paper was creative, intellectual, and worthy of publication and selection into the LSU graduate student writing competition because of the way it compared African mythology with narrative storytelling in the law made popular through Critical Race Theory,” Professor cummings said. “He explored inequality, power, and race, identifying the gravity of storytelling and personal narrative in influencing the law and the judicial process.”

Treadwell attempts to reconcile these two conflicting perspectives through a combination of Critical Race Theory, Hip-Hop methodology, comparative mythology, and cross-cultural communication. He ultimately concludes that personal narratives can expose narrow-minded and alienating dogma while building a bridge between society’s top and bottom, something logical argumentation could not achieve on its own.

“The law uses logic, but it’s pointless if the law doesn’t breathe life into the petitioner’s case. When you think about it, people don’t talk about cases because of the lawyers involved. They talk about the stories and the laypeople behind the cases,” he said. “We have to allow logic to bend to offer relief, which is equity. One plus one can’t always equal two and be just. Just and equitable societies have to consider petitioner’s stories.”

Treadwell has submitted his article to a few law reviews. Publication decisions are pending due to the shift required by COVID-19. In the meantime, he is finishing law school and preparing to join his wife, who is a classical animation student at the Vancouver Film School.

Treadwell also co-wrote, directed, and co-produced his first feature film with 2019 Bowen graduate, Josh Hardin. It’s a post-apocalyptic thriller about how, when we have nothing left, consuming and making art, telling stories, enables us to live by transcending mere survival.