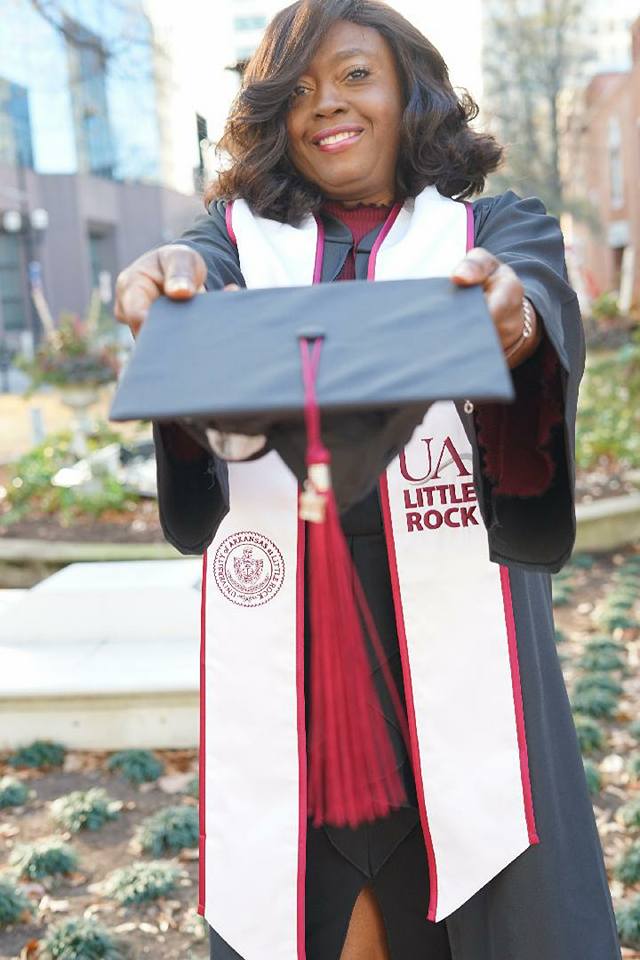 A University of Arkansas at Little Rock graduate who celebrated her 53rd birthday on the day of commencement is looking forward to a future of helping children in the juvenile justice system.

Joni “Marie” Hollowell of Little Rock graduated May 16 with a master’s degree in criminal justice.  She moved to Little Rock in 2013 from Canton, Georgia, to work as a senior compliance auditor at Stephens, Inc. After completing an associate degree more than 20 years earlier, she decided to complete her college education at UA Little Rock.

“I looked at different schools in the area, and UA Little Rock caught my eye,” she said. “I knew I wanted to major in criminal justice, and I wanted to focus on juveniles.”

While working on her undergraduate degree, Hollowell became the guardian of four siblings she befriended while volunteering as a youth director at Warren Hill Missionary Baptist Church in North Little Rock.

While continuing her education, Hollowell’s family also grew. In 2015, she became the guardian of her 4-year-old grandson. Four years later, her grandson’s 10-year-old brother also joined the family. While working full time, going to school, and raising kids at the same time has been a balancing act, she doesn’t regret it for a moment.

“It gets tough some days working, going to school, and raising them,” Hollowell said. “The two girls are in college now. The kids have kept me encouraged to keep going. I wanted to set a good example for them. No matter how tough it gets, you don’t give up. It was a good process. I wouldn’t change it for anything.”

In her free time, Hollowell, a U.S. Army veteran who served in Korea, is a dedicated member of the military sorority, Kappa Epsilon Psi Military Sorority, Inc., and is passionate about giving back. She has served as the chapter’s historian, chaired the scholarship and community service committees, and is currently the chapter’s vice president.

“We feed the homeless in Little Rock through Fishnet Ministries,” she said. “We also visit the veterans at the Arkansas Veterans Home. We have a school we adopted, so we collect uniforms every year to provide to Washington Elementary and have special events for the children.”

Not only is Hollowell a spring 2020 graduate, but she has already completed the first semester for the master’s degree in rehabilitation counseling at UA Little Rock. Her goal is to complete her second master’s degree by 2023 and then work with children in the juvenile justice system that have been diagnosed with a mental or behavioral disability.

She is thankful to Dr. Mary Parker, chair of the Department of Criminal Justice, for serving as mentor during her undergraduate and graduate degrees at UA Little Rock.

“Dr. Mary Parker was the best,” she said. “She was my first advisor. She has been exceptional throughout the whole process. I don’t think I could have made it without her.”

Once the COVID-19 restrictions have lifted, there is one missed opportunity that Hollowell is looking forward to completing.

“I have one classmate that I’ve never met. Her name is Lynette Coleman, Hollowell said. “We’ve done the criminal justice program from undergraduate through the master’s degree. She has helped me through it as well. We were looking forward to meeting each other at graduation. Now, we plan on meeting for lunch once the COVID-19 restrictions have lifted.”