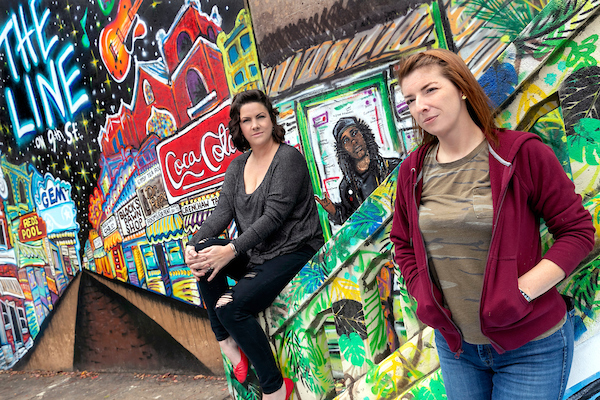 A University of Arkansas at Little Rock student and alum are among the artists who are creating beautiful works of art to bring images of peace to life along 7th Street in Little Rock.

Every year, local artists gather during Arkansas Peace Week to collaborate on the murals to send a message of inclusion and peace to the Little Rock community. Arkansas Peace Week coincides with the United Nations Day of Peace, which is celebrated during the third week of September.

“Artists work better together is a group where they can intermingle, come up with new ideas, and create new projects,” Stewart said. “The 7th Street Peace Murals really does that for artists, musicians, and poets of all kinds. There is a community that is being created by us being there and painting and fighting against the evil that is going on in the world. This shines a lot on how much we need art programs in the world right now.”

Although Peace Week ended Sept. 27, Stewart, Winkler, and other artists are still hard at work completing the murals they started. Winkler created a mural of Breonna Taylor, a 26-year-old Black woman who was killed in March by police who were executing a search warrant in her Louisville, Kentucky, apartment. Winkler is also working on a mural featuring Elijah McClain, a 23-year old Black man who died in Aurora, Colorado, last year after being stopped by the police.

“I saw the documentary ‘Dreamland’ at UA Little Rock, and I didn’t realize how much history and culture were a part of this Black business district that was wiped away,” Stewart said. “I thought it was important to document that part of our city’s history.”

She used black and white photographs of the former 9th Street corridor to try to paint as many businesses as possible. Stewart said she was visited by many former residents of 9th Street, who enjoyed the experience of reliving past memories.

“As I was painting, people would stop and tell me their memories of growing up in that neighborhood, going to church, listening to music, and eating in restaurants,” Steward said. “A lot of people gave me new information to represent places that I didn’t know existed. They knew because they lived it. Phyllis Brown, who is the sister of one of the Little Rock Nine, even told me a couple of stories about some of the places.”

The peace murals provide a way for the community to connect with the artists. People often honk their horns, wave, or come up to talk to the artists while they are working, but not everyone is supportive of the artistic movement. Some of the artwork on this year’s murals have been vandalized, though not Stewart or Winkler’s art. They say that the community and fellow artists have stepped up to restore the art.

“There are people who will let us know that they disagree with what we’re doing,” Stewart said. “The content of our art is stirring emotions. No matter how much vandalism happens, we are always going to be back the next day painting over it and making the murals bigger and better.”

Winkler said the artists strive to answer hate with messages of love and inclusivity.

“We try to keep a positive, optimistic message,” Winkler said. “We don’t want to give these people the power to spread the hate and vitriol in their hearts. You can’t answer hate with hate.”

The next chance for the public to interact with the artists working on the 7th Street Peace Murals is Nov. 1, when they will hold a Day of the Dead Market.