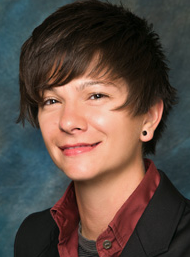 Esther Mead is graduating from the University of Arkansas at Little Rock this month with a Ph.D. in integrated computing with an emphasis in information quality as well as post-doctoral research position to continue her research at UA Little Rock’s Collaboratorium for Social Media and Online Behavioral Studies (COSMOS).

“Obtaining a Ph.D. represents the self-actualization of my highest academic goal,” Mead said. “It’s sort of like reaching the summit of a great mountain that you have been struggling to climb for several years. This has been my goal since I began my academic journey, and to have finally reached the summit is like a dream come true. I only wish that my father could have seen it.”

Mead is a first-generation college student who earned a bachelor’s degree in psychology, a Bachelor of Business Administration, and a Master of Business Administration from the University of Central Arkansas. She then taught marketing research and consumer behavior courses at San Diego State University for four years before returning to Arkansas to help care for her father, who had been diagnosed with prostate and bone cancer, and to pursue a Ph.D.

“Although I was leaving a great position at SDSU, I could take the opportunity to achieve my highest academic goal,” Mead said. “When I arrived back home, however, I discovered that the problem was a lot more complicated than I had anticipated. Not only was my father suffering, but my youngest sister and her young son were also suffering from problems. Both my sister and her son have learning and behavioral disorders, and since they and my parents were all living in the same household, there was a great amount of disorder and tension.”

Mead said she took one year to fully concentrate on helping her family. She cared for her father and helped her sister find a job and move to a new apartment before Mead moved to UA Little Rock.

In 2016, Mead entered the master’s degree program in business information systems at UA Little Rock. She discovered COSMOS after enrolling in the integrated computing doctoral program.

“I was impressed by the level of professionalism and societal impact of the work that I had read that was coming out of the organization, and was immediately interested in figuring out a way to become part of the team,” Mead said. “As part of COSMOS, I have been privileged to be part of several important research works. These include numerous analyses of bots, toxicity, and misinformation campaigns on social media platforms.”

Her research has aided in the identification and subsequent mitigation of malicious actors that infiltrate the public information space that have drastic effects on society. One of the research projects Mead participated in was a website that tracks the spread of misinformation regarding COVID-19.

“There was a tremendous amount of disinformation circulating on social media platforms about COVID-19, which several of my family members believed!,” Mead said. “This led me to become involved in a COSMOS-led effort to create and curate a website that kept track of these various COVID-19 misinformation items and provided disproof. Additionally, I am continually taking great care to ensure that my elderly mother is staying safe, and likewise for my sister and her son.”

During her time at UA Little Rock, Mead has found many mentors in the computer science and information science departments.

“Dr. Nitin Agarwal, for example, not only has given me the most professional and technical advice I have ever received as a student, but he is also extremely empathetic and optimistic,” Mead said. “Additionally, Dr. Mariofanna Milanova has given me a tremendous amount of one-on-one guidance and support. Dr. Elizabeth Pierce is another professor for which I have an extreme admiration. Dr. Pierce has given me her valuable time to talk about research ideas and life in general. And, Dr. John Talburt, who has not only given me valuable advice about research, but has also provided his time to simply chat whenever I needed it.”

Now that Mead has achieved her long-term goal of earning her doctorate, she has accepted a position as a post-doctoral researcher at COSMOS and will continue research regarding numerous aspects of social media data analysis and online behavioral studies, mentor new student researchers, and hopes to become a professor again in the future.

“I am extremely proud of Esther,” Agarwal said. “She is everything a professor could ask for in a graduate student – intelligent, motivated, dedicated, communicator, leader, team player, and educator. She will inspire a generation of students to learn, achieve, and aspire.”