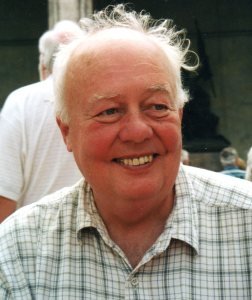 Bowlus was born in Iola, Kansas, to the late George and Jane Bowlus. He majored in chemistry as an undergraduate at the University of Kansas, but a fortuitous accident when he caused a fire in the chemistry lab led him to his true calling. Bowlus became a medievalist, completing his Ph.D. at the University of Massachusetts at Amherst and specializing in medieval Europe and military history.

“He was the only medievalist I’ve ever met who sided with the peasants and not the aristocrats,” said Dr. Edward Anson, professor of history.

After college, Bowlus worked as a reporter in Colby, Kansas, before joining the U.S. Army. He served as a chaplain’s assistant in France. While in Europe, he courted and married his wife, Barbara, a Swiss exchange student he met at the University of Kansas.

Together, the couple taught many Trojans. Bowlus was a passionate professor for more than 25 years at UA Little Rock. Barabara Bowlus also taught German at the university.

“Chuck Bowlus was a stellar scholar and a thoroughly wonderful human being,” said Dr. Jane Brown, professor emerita of art. “Barbara was an equally outstanding colleague and a champion for students. I was fortunate enough to be included on a trip to Germany, funded by a Department of Education grant, with Chuck and Barbara as well as other UALR faculty from diverse departments. Their deep knowledge of the country, its museums, cultural sites, and restaurants made it an opportunity of a lifetime.”

“Chuck Bowlus was a force of nature. He was passionate in just about everything he undertook,” Kaiser said. “He saw no wall between his scholarship and teaching on the one hand and his non-academic life on the other. In this way, he managed to enrich his scholarship on a largely agrarian society with his own experience farming and his own travels in lands whose geography and culture he got to know intimately. Scholarship, for him, was not an isolated activity. It was meant to be shared, which he did through his dedicated teaching and the tours he conducted with students in Europe.”

Bowlus is survived by his life’s companion of 54 years, Barbara Bowlus, daughter, Cordelia, son, Christopher, and four grandchildren. His family described his time as a professor in the Oshkosh Herald.

“On the UALR campus, he was known as an energetic, erudite, and witty,” the Bowlus family wrote. “While his area of research was medieval history, he taught everything from world to environmental history. He had a bellowing voice which could be heard through the classroom walls. Although he was tone deaf, he loved to sing, especially when he saw students nodding off. His favorite was ‘La Marseillaise.’  Yes, he was an iconoclast, a revolutionary at heart. He was THAT professor who made an indelible impression on students, not only engaging them in the complexities of human history but laying bare its relevance.”