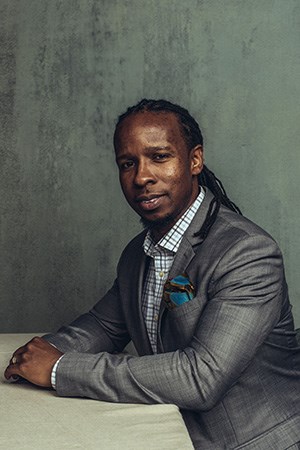 Dr. Ibram X. Kendi, award-winning author of “How to Be an Antiracist,” spoke to more than 300 UA Little Rock students, faculty, and staff in celebration of Diversity Month on March 31.

Kendi is a three-time, No. 1 New York Times best-selling author including the groundbreaking, “How to Be an Antiracist,” one of the books chosen for the university’s first campus-wide book read and discussion on race and ethnicity.

Lauren Wilson, assistant director of the Multicultural Center, joined Kendi in a frank discussion about his books, work in higher education, and his views on policy and power.

“It was my honor to be in conversation with Professor Kendi,” Wilson said. “I was impressed by the way he was able to take the big ideas from his research and work and make them relevant for us here at the University of Arkansas at Little Rock. It is my hope that this conversation will lead to more conversations, but more importantly, to action that will help our campus be a welcoming, equitable space for all students, faculty, staff, and community members.”

“Bringing together 90 writers was unlike anything I’ve ever done before,” Kendi said. “I wanted to put together a single volume of Black history that would allow people to read the full story of African Americans. I wanted them to learn about the Black historical experience in all of its complexity. I wanted them to see that the racial problem has never been Black people. The racial problem has always been racism.”

He offered advice on how those in higher education can work toward building an antiracist society that ensures equity and justice.

“If you are in faculty affairs, focus on faculty diversity and affairs,” he said. “You should be pressing for a faculty body representative of the state. If you are a student, you should do the same with students. We can all focus and start in our own backyard.”

As the founding director of the Boston University Center for Antiracist Research, Kendi researches novel and practical ways to understand, explain, and solve seemingly intractable problems of racial inequity and injustice.

“We have a nation of racial inequities and injustice. Let’s look at anti-Black racism,” Kendi said. “Black folks are twice as likely to be unemployed than white people. Black folks are disproportionately incarcerated. They are dying at twice the rate of Covid-19. We have to track those stories to understand those stories. That’s the first research project. The second research project is what is causing these disparities. The next step is what are we going to do about it, and then we can create data-driven solutions.”

When asked by an audience member how people should respond to the outcome of the trial of Derek Chauvin, the Minneapolis police officer who has been charged with second-degree murder, third-degree murder, and second-degree manslaughter in the death of George Floyd, Kendi compared the situation to how you handle the death of a loved one who is seriously ill and then passes away.

“When we know they are seriously ill, we are not necessarily surprised or shocked when they pass away, but we are still hurt,” Kendi said. “If there is a not guilty verdict, we shouldn’t be surprised. It’s almost impossible to convict a white police officer of killing a Black person in this country. It’s almost impossible to get them to trial, let alone get a guilty conviction. I also don’t think that should stop us from being sad or outraged or hurt, as we are when a loved one passes away. If there is a guilty conviction, that is something we can build on. We want a system of equal justice.”

Wilson asked for Kendi’s suggestions for podcasts and television shows to watch for people who want to learn more about differing viewpoints.

“If you don’t necessarily read, you can listen to audiobooks when you exercise,” Kendi said. “I consume a lot of audio books. It allows me to read more. Podcasts like NPR’s ‘Code Switch’ is a podcast I would recommend. Many people talk about ‘Watchman’ or ‘Lovecraft County.’ Even a show like ‘S.W.A.T’ on CBS talks about racial issues. We are in a time when there are many great creators.”

Kendi also had a message of hope for those who are overwhelmed by the fight for racial justice and equality.

“Dealing with racism for everyday people who are going about their lives is tiring. Fighting racism on top of that is tiring too,” Kendi said. “I think people should be able to voice how tired they are. I think it’s human to be tired of fighting something day in and out. I don’t think that’s a problem. I do think it’s a problem if we allow that tiredness to cause us to stop. There are days when we are cramming for that test, and we are tired. We should say that, but we shouldn’t consider stopping. It’s important for us to know that if we are fighting against racism collectively that there is a chance that one day we won’t be tired anymore from racism. That’s the type of society that I want to build. That is the type of society that we should all want to build.”

The event was sponsored by the UA Little Rock Multicultural Center, Diversity Council, and Office of the Chancellor.