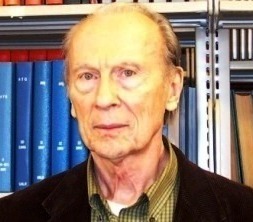 Ward worked at UA Little Rock from 1973 until his retirement in 2000, and he was known to continuously visit campus to check in on friends, colleagues, and students.

“What a remarkable human being Allan Ward was – a gentle, intelligent, giant of a man,” said Dr. April Chatham-Carpenter, chair of the Department of Applied Communication. “He was one of the first people I met when I started in my current position in July 2015, and would stop by my office on a weekly basis to bring me ideas of what to do around Little Rock. Sometimes he would take me for a walk to places on campus that were meaningful to him, such as the University District office and the Sequoyah Research Center. He introduced me to folks I might never had known had he not introduced us.”

After becoming colleagues while teaching at Lane College in Jackson, Tennessee, Ward and Porter traveled to states like Mississippi and Arkansas to challenge race relations and find cooperation in the divided South.

“As we continued getting to know each other, I began to hear more of his story, and marveled that we had such a man in our midst, who with great humility had created a social movement in higher education in the South, along with his friend and colleague Albert Porter,” Chatham-Carpenter said. “The stories of his courage and ethics continue to inspire me, as they have so many others. His legacy will certainly live on in all our hearts and lives.”

For more than 50 years, Ward and Porter worked together, fighting for racial equality and traveling all over the world. Both Porter and Ward continued to help the community in Little Rock, working with foster children, the homeless, and volunteering for public schools.

“Dr. Ward was a community giant, great educator, and overall sweet spirit. I met Dr. Ward when I worked at the Institute on Race and Ethnicity,” said Donna Shelton, academic editor and web manager for the Office of the Provost. “He was always so welcoming and warm. Later I found out about the tremendous work he did in civil rights across the South for more than 50 years. He shared stories with me and our students about how he immersed himself in the struggle for a more equitable society. Dr. Ward was a humanitarian who worked to make the lives of others better; people he saw as family.”

Ward was also a frequent guest speaker at classes, and his word left an impact on students.

“Dr. Ward was a wonderful colleague and an inspiration,” said Dr. Julien Mirivel, professor of applied communication. “He came to the department frequently and we loved seeing him and connecting with him. One of my favorite moments took place when he joined a graduate course I was teaching during the weekend. He came to join us on a Sunday morning and shared with students such powerful stories (especially from his book Civil Rights Brothers). I ended class at noon so students and I could take lunch. I saw several students staying behind to ask questions, so I thanked him for his time and left to grab a quick lunch. When I returned an hour later, I found that most of the class was still there.”

Ward served on various boards and commissions, including Treatment Homes, Inc., Volunteers in Public Schools, Friends of the Arts, The Weekend Theater, the Arkansas Supportive Housing Network, the Oasis Renewal Center, the Friends of the Zoo, Community Concerts, Agency on Aging, the Racial and Cultural Diversity Commission, Pulaski County Historical Society, the Japan-American Society, and the Arkansas Council of International Visitors, among others. He taught adult education courses at LifeQuest of Arkansas and the Shepherd’s Center of North Little Rock.

“He was my teacher for many classes, a colleague, and more important a friend,” said Cheryl Johnston, an instructor in the Department of Applied Communication. “It was always such a joy to see him out at many community events. I have never met another person with a servant’s heart as big as his. He touched more lives than he ever knew.”

He also served on the Board of Directors for the Friends of the Sequoyah National Research Center, a fundraising organization that was disbanded in 2014.

“He took his position seriously in that he was our most passionate and supportive ‘Friend.’ Many times, he would give a one-year membership to the Friends group to someone that happened to sit beside him at a symphony performance or his neighbor,” said Erin Fehr, an archivist with Sequoyah National Research Center at UA Little Rock. “When they received their first Friends Update, we would get a call asking us why they received it. Most of the time, they appreciated it and would attend one of our events. He was one of the most genuine people I’ve ever met and truly one of Sequoyah’s dearest friends.”

Ward also served as dean of instruction at Philander Smith College, director of research and staff development at World Services for the Blind, and taught communication courses at the Arkansas Police Academy and in the prisons. As a consultant, he provided lectures, workshops, and seminars for institutions in the commercial, governmental, educational, health-care, non-profit, and religious sectors. Internationally, he spoke to groups in various countries, such as Africa, Asia, Europe, and South America.

Ward will be buried at Pinecrest Cemetery in Bryant. No funeral service is planned.

The Department of Applied Communication created an endowed scholarship fund in his honor. The Dr. Allan Ward Endowment for Student Success supports student participation in high-impact initiatives that include student research, study abroad programs, and internships.