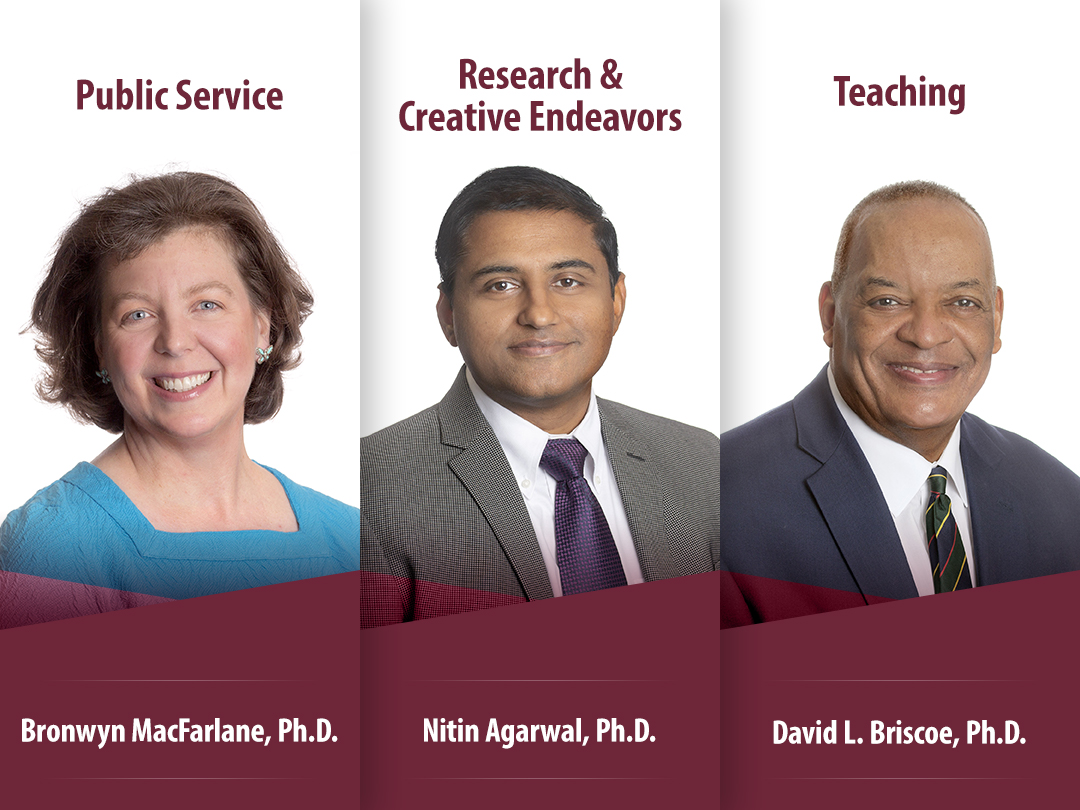 The University of Arkansas at Little Rock has selected Drs. David Briscoe, Nitin Agarwal, and Bronwyn MacFarlane as the 2021 winners of the Faculty Excellence Awards.

Briscoe, professor of sociology, has been named the 2021 recipient of the Bailey Teaching Award and will receive a $5,000 award. Briscoe began his teaching career at UA Little Rock in 1992 and has consistently been honored for excellence in teaching and public service over the past three decades.

Agarwal, Maulden-Entergy Endowed Chair and Distinguished Professor of Information Science, was named the Faculty Excellence in Research and Creative Endeavors winner and will receive a $5,000 award. Agarwal is an internationally known researcher who pioneered work in the social computing discipline. He launched the Collaboratorium for Social Media and Online Behavioral Studies (COSMOS), which was designated last year as a research center by the Arkansas Department of Higher Education.

MacFarlane, professor of gifted education, received the Faculty Excellence in Public Service Award and will receive a $5,000 award. She has contributed extensively to public service in the field of gifted education and serves as a nationally elected and recognized leader in the National Association for Gifted Children.

“Our faculty excellence winners represent the university’s commitment to superb instruction, outstanding research, and community service,” Provost Ann Bain said. “Each of the winners has made immeasurable contributions to the UA Little Rock community and to the lives of their students and colleagues. We thank them for their service.”

The UA Little Rock Board of Visitors selected the university-wide winners from the 12 faculty members who were selected as the top faculty members for the 2020-21 academic year in each of the three categories in their respective colleges and the William H. Bowen School of Law.

He began teaching at UA Little Rock in 1992 and has been consistently honored for excellence in teaching and public service. Briscoe has been awarded nearly 60 honors; earned professional development certification from Harvard Graduate School of Education, Harvard Divinity School, Princeton Theological Seminary, Oxford Round Table; and was twice named a Distinguished Teaching Fellow for the UA Little Rock Academy of Teaching and Learning Excellence. He has received the Graduate and Retention Advocate Award four times and received the Faculty Excellence in Public Service Award in 2020.

Briscoe is known as an advocate for students with disabilities and was voted among the Best of the Best Professors three times by the UA Little Rock student body. He serves on the National Phi Kappa Phi Awards Committee, the Chancellor’s Race and Ethnicity Advisory Committee, the Centennial Campaign Cabinet, and the Institutional Effectiveness Committee.

As the NCAA Faculty Athletics Representative, Briscoe assists with the certification and undergraduate education of UA Little Rock’s student-athletes, serves on a number of committees at the Sun Belt Conference, and served as a panelist at the 2019 Inaugural Diversity Summit.

Agarwal is an internationally distinguished researcher whose pioneering work in the social computing discipline has significantly advanced this fledgling area and helped open many doors for innovation for the scientific community. His primary research interests are in social computing, (deviant) behavior modeling, studying group dynamics, influence, trust, collective action, social-cyber forensics, health informatics, data mining and privacy aims to be at the vanguard of the ever-evolving online behaviors.

At UA Little Rock, he created the Collaboratorium for Social Media and Online Behavioral Studies (COSMOS), which was designated as a research center by the Arkansas Department of Higher Education in 2020.

“STEM education needs to be research-driven so that we can expose our students to cutting-edge technologies to prepare them as the next generation workforce that is capable of developing innovative solutions to real-world problems,” Agarwal said. “Our students are the lifeblood of research projects at COSMOS. Our mission is to conduct competitive research, transition research from publications to practice, and inspire thought leaders that communicate science to society and contribute to the social good.”

COSMOS has produced more than two dozen projects, published 10 books and more than 200 publications, and three important tools: Blogtrackers, YouTubeTracker and Focal Structure Analysis. In the past year, COSMOS has assisted the Arkansas Attorney General’s Office track scams and disinformation related to COVID-19 that led to the development of COVID-19 Misinformation Tracker.

“Our research examines some of the very complex and interdisciplinary problems that challenge science and society alike,” Agarwal said. “For a meaningful impact, we partner with educators, researchers, businesses, practitioners, journalists, policymakers, defense and security agencies across our state, nation, and the world.”

Bronwyn MacFarlane has contributed extensive public service in the field of gifted education. She has served as a nationally elected and recognized leader in the National Association for Gifted Children (NAGC) in the roles of chair of the STEM Network with more than 1,000 members and chair of the Counseling and Guidance Network, which serves over 700 members.

For three years, MacFarlane wrote the popular column “The Curriculum Corner” in NAGC’s national magazine, “Teaching for High Potential.” She also serves as an editorial assistant and guest editor for the academic journal “Roeper Review.”

MacFarlane has served as chair or a representative on more than 25 UA Little Rock committees, on over 15 national and state education committees, and has held or continues to hold several state and national leadership positions in gifted education. In Little Rock, MacFarlane is a regular volunteer judge and guest speaker for events like the Central Arkansas Regional Science Fair, Arkansas 4-H, and Girls in STEM Leadership Conference. She provided expert commentary in interviews to the local media for parents to support children’s learning and mental health during the pandemic.

MacFarlane has received national and international recognition in the field of gifted education. Some of her awards include the Early Leader Award from the National Association for Gifted Children in 2018, the Wedge Distinguished Scholar Award at Western Kentucky University in 2017, and the Challenger Award from the Arkansans for Gifted and Talented Education Association in 2016 for her cutting edge book “STEM Education for High Ability Learning.”

“Public service is integrated into my work, and my activities focus on ways to develop talent in different settings,” MacFarlane said. “My service activities at each level, whether local, university, state, national, or international, can be best summarized as contributing my time and expertise to supporting the talent development of others. Whether I am volunteering locally, evaluating federal projects and university programs, or speaking to parents and teachers about education, I am always focused on doing what I can to support someone’s talent development and growth.”