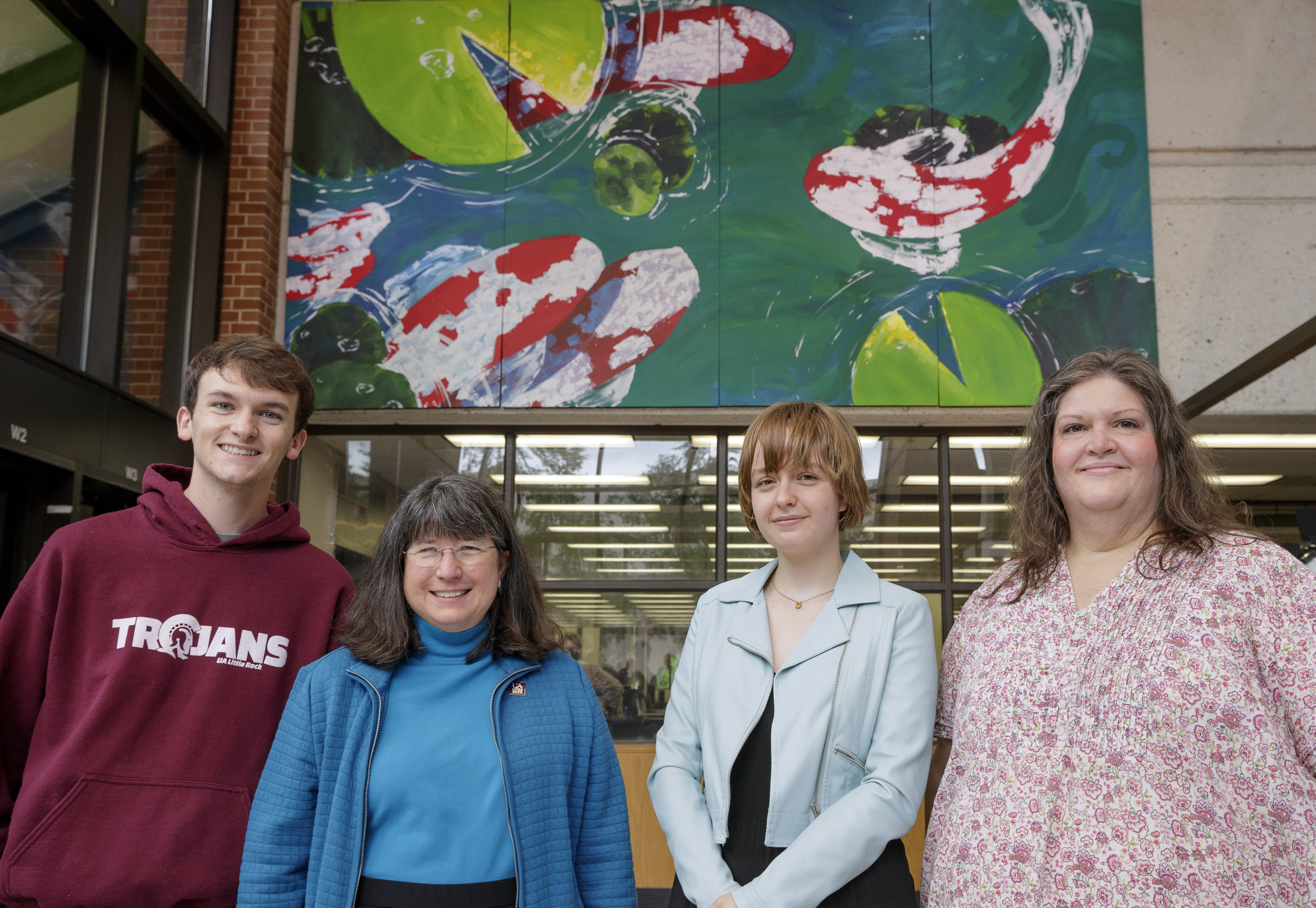 The University of Arkansas at Little Rock dedicated a new student mural in the lobby of Ottenheimer Library during a ceremony on May 11.

The new mural, entitled “Koi,” is eight feet wide and 16 feet long. Emma Chambers, the student artist who created the mural, hopes the peaceful painting of fish swimming in a koi pond will bring a sense of calm and tranquility to all who see it.

“Previously, I was struggling with grounding myself, especially during the pandemic,” Chambers said. “I lost my sense of place as I believe many of you also did. Meditating, looking at koi fish, and finding my inner peace were some things that helped me. I wanted to give that to other students by sharing my love of koi fish and giving everybody else a sense of place.”

The mural is the result of the first campus-wide competition designed to honor and highlight the wonderful work of UA Little Rock’s student artists.

Chancellor Christina Drale praised the mural as “the people’s choice.”

“This project is also special because it represents a unique collaboration that represents the best of who we are at UA Little Rock,” Drale said. “This effort was so successful, and the results so marvelous, that I am encouraging the Building and Grounds Committee to continue the collaboration and make this an annual event.”

The campus partners involved in the student mural competition and installation include the Student Government Association (SGA), the Buildings and Grounds Committee, Facilities Management, the Department of Art and Design, and Ottenheimer Library staff.

“Most of you probably know that koi are a type of carp fish bred for their vibrant colors,” Drale said. “You see them frequently in garden ponds. What you might not know, and what Nancy Hamilton has graciously shared with me, is that in Japan, the koi is a symbol of prosperity and good fortune, but also of perseverance in the face of adversity. I have to say, I can’t think of a better symbol for the year we’ve been through than that. And what a wonderful testimony to the resilience of our students at UA Little Rock!”

SGA President Landon DeKay said the idea for a student mural competition originated with former SGA President Katie Zakrzewski in 2019. When DeKay began his presidency last fall, the SGA was determined to bring the student mural to fruition.

“It’s been a very hectic school year, and we need something bright to lift our spirits. The mural is very beautiful,” DeKay said. “SGA wants to get students involved on campus. We are very excited to showcase student artwork around campus, and we hope to continue this tradition for years to come.”

Chambers, a junior Bachelor of Fine Arts major with a concentration in painting, said it took two weeks to complete the mural. She received help from several of her professors in the Department of Art and Design, including Ricky Sikes, Peter Scheidt, and Kensuke Yamada. A patron from the library helped prime the mural, and her brother helped her paint.

“The mural turned out very well,” Chambers said. “I have a whole new appreciation for teamwork. Painting is solitary, but I had no idea how many people were involved in the creation of a mural.”