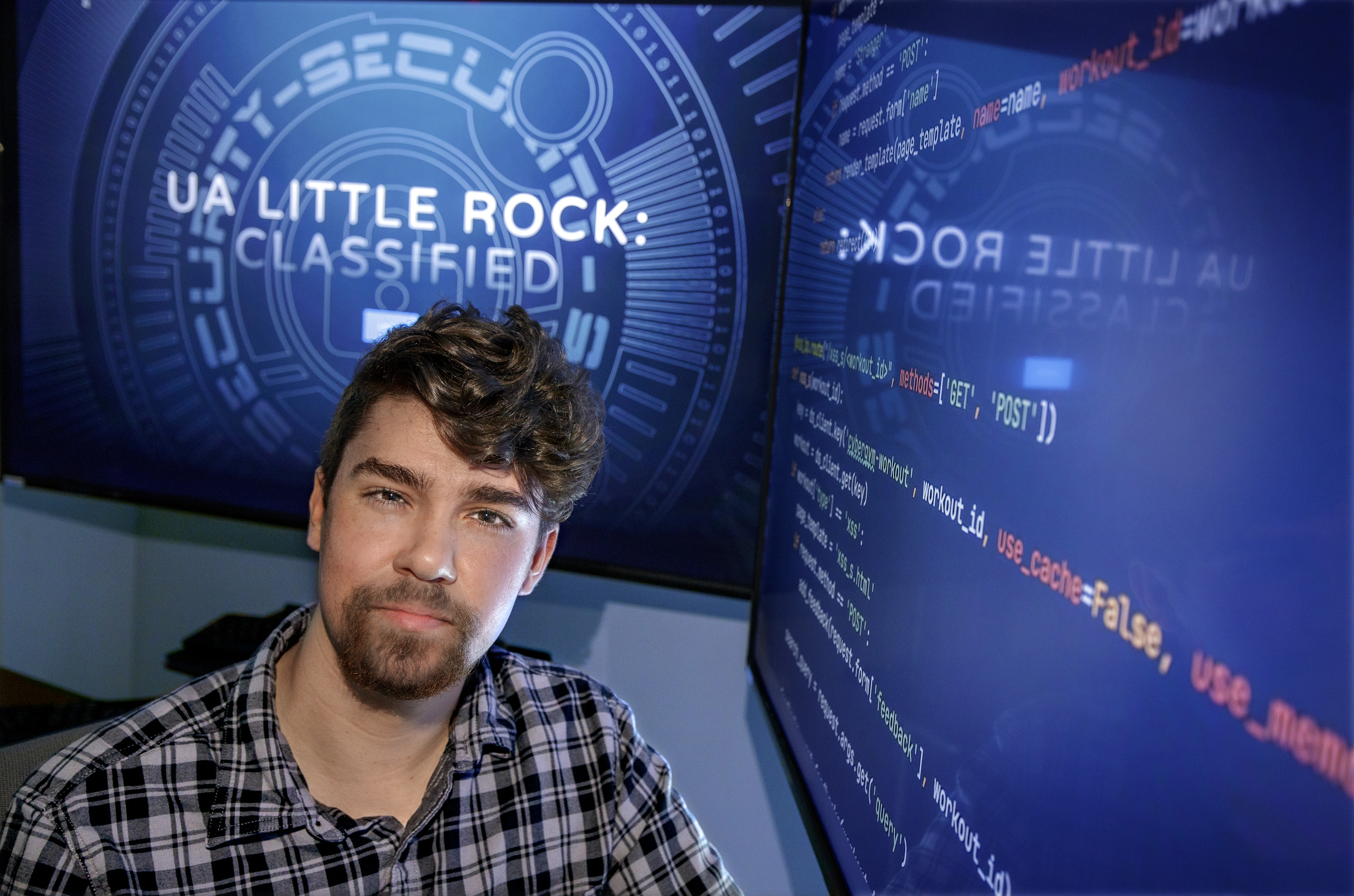 Chance Melby, a Donaghey Scholar from Cabot, first got hooked on cybersecurity when he interned with the Cabot Public School District Technology Department during high school.

“Originally, I was accepted into the Donaghey Scholars Program and that solidified my choice into going to UA Little Rock,” Melby said. “I also heard the Computer Science Program was one of the best in the state. I saw the opportunities that computer science and the City of Little Rock could give me. I wanted to get my foot in the door and learn new things. I knew UA Little Rock was a place where I could excel.”

“I discovered that Arkansas has too many unfilled cybersecurity positions and not enough skilled professionals,” Melby said. “To address this issue, I dedicated myself to ensuring that each Arkansas student has the opportunity to learn about cybersecurity so that our communities may use their future expertise to protect everyone’s data and privacy.”

As a hands-on learner, Melby dedicated himself to studying and participating in competitions that would propel his skills in cybersecurity. He served as president of UA Little Rock’s Cybersecurity Club and participated in events like the Collegiate Cyber Defense Competition, Jolt Hackathon, United States Cyber Challenge, and Walmart’s Sp4rckCon 2.0.

The UA Little Rock Cyber Arena hosts educational materials and threat exercises on cybersecurity for students and teachers on the Google Cloud platform. Melby has created nine out of the 24 labs available on the cloud. These labs have been used by more than 450 K-12 students across 80 Arkansas schools.

“Chance has worked on the UA Little Rock Cyber Arena since the beginning and has seen it reach schools all across Arkansas,” said Philip Huff, assistant professor of computer science at UA Little Rock. “The workouts he develops are always popular among students. He has a gift for communicating the complexities of cybersecurity in a way students connect with and enjoy.”

“The web application is called UA Little Rock Classified because it has a story element attached to it in which fictional Cyber Arena employees try to secure classified flags,” Melby said. “They do a horrible job at it, hence the vulnerable web application. The student is tasked with finding those flags. By providing fun, engaging scenarios about ‘secret classified documents’ and challenging yet straightforward exercises to retrieve these ‘documents,’ more students could excel and learn about web application security.”

As he became more adept in web application development and cybersecurity, Melby used his skills to work with Cyber Arena partners.

“The first partnership I worked with was the Arkansas Small Business and Technology Development Center (ASBTDC) for a Cybersecurity Maturity Model Certification assessment hosted as a Google Cloud container web application,” he said. “After that project, I took up my current project with the NSA on threat exercises to teach about protecting private healthcare information from IoT attacks.”

Melby counts Dr. Simon Hawkins and Dr. Jessica Scott from the Donaghey Scholars Honors Program as mentors who “gave me an opportunity that changed my life.”

“Chance is going to go do great things in cybersecurity. He has an evangelical zeal on the topic,” said Hawkins, director of the Donaghey Scholars Honors Program. “He explains the complexity of the field so well that he can make even the most befuddled liberal arts professor feel that they understand the ideas. He is committed to working with the growing cybersecurity industry in Central Arkansas.”

Chance is also thankful to Philip Huff for always making his life interesting in college.

“He is my primary advisor, professor, my mentor, and boss,” Melby said. “He gave me the opportunity to work with Arkansas students through the Cyber Arena, and taught me so many technical skills. He’s taught me so much. If Philip Huff wasn’t at this university, I believe we’d be having a different conversation. My story might not even have been interesting enough to tell.”

Melby also volunteers with Girls of Promise as part of a virtual program to educate and encourage young women interested in STEM about career opportunities in cybersecurity through the Cyber Arena.

“There are not enough skilled cybersecurity professionals out there,” Melby said. “Women are underrepresented in the STEM area. With this program and my volunteering, I was hoping to encourage these young women to get interested in a STEM career, hopefully cybersecurity.”

Following his graduation, Melby will start an internship at Arkansas Electric Cooperative, begin testing for more certifications, and look for a permanent position in cybersecurity.

“What’s next is to get my foot in the door to find a career in cybersecurity in Arkansas,” Melby said. “Even though I’ve graduated, I’ll still be a student at heart going for these certifications in computer science and cybersecurity. Now that I’ve graduated, it’s surreal to think how four years went by so fast. Now I’m ready to get out there and put what I learned to the test.”