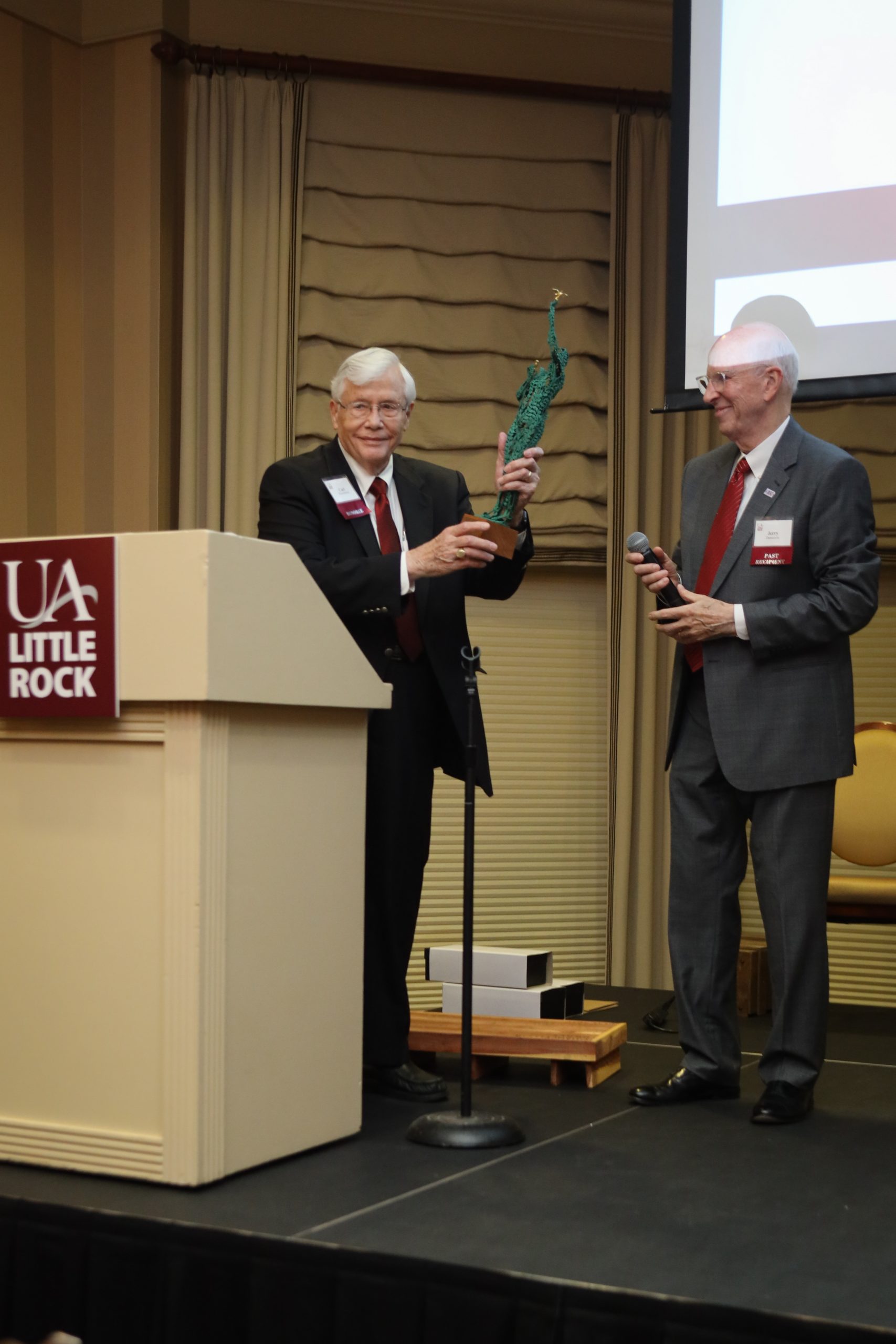 More than 250 people celebrated Carl Rosenbaum, co-founder of Safe Foods, as he received the award during an Oct. 21 reception at Chenal Country Club. The James H. Fribourgh Award honors individuals who have made considerable contributions to the state of Arkansas through Science, Technology, Engineering, and Mathematics (STEM).

It was a record-breaking night as UA Little Rock raised more than $206,000 for student scholarships, which is the highest amount ever raised during a Fribourgh Award Ceremony. Proceeds will be used to create the Carl Rosenbaum Endowed Scholarship Fund that will help UA Little Rock attract and retain high-achieving, full-time undergraduate students majoring in science and mathematics.

UA Little Rock Chancellor Christina Drale declared Rosebaum as a shining example of someone who has dedicated his life to using science for good.

“As a pioneer in the food safety industry, Carl Rosenbaum shows us the power of science to serve humanity, and he shows us what it means to choose our aspirations well,” Drale said.

The event’s presenting sponsors include Jerry and Sherri Damerow, 2017 recipients of the Fribourgh Award, the Board of Safe Foods Corporation, and Arkansas Glass Container Corporation. Jason Curry, pastor at The Church at Rock Creek and founder of Finish Empty®, served as the emcee for the ceremony.

Jerry Damerow, a close friend of Rosenbaum, said he had the good fortune to see the story of Safe Foods unfold when he served as associate director of the medical technology accelerator, UAMS BioVentures.

“Carl became intrigued with a technology that researchers at UAMS had come up with, the use of cetylpyridinium chloride, to eliminate harmful food pathogens,” Damerow said. “These previous meat recalls were expensive, both in terms of money and reputation for the companies. Carl set up a new company, Safe Foods, to hold that license. Safe Foods is just a wonderful addition to our community. I think this illustrates the importance of research coming out of our universities. Safe Foods is now the premier food safety company in the country. What Carl did with his patience, persistence, and prayer getting Safe Foods through those early years and getting the product to the market is incredible and one of many reasons he is being honored.”

Chris Coleman, president and CEO of Safe Foods and Rosenbaum’s grandson, said his grandfather is a strong leader who he admires greatly.

“I was 22 when I started working at Safe Foods, and I’ve been here for 21 years now,” Coleman said. “My grandfather has been the strong leader that has brought us through the hard years of starting a new company to the fun years of celebration and success. The culmination of where we are right now is a product that protects over 300 million servings of food every day. We are looking forward to another 20 years of success and growth.”

While accepting his award, Rosenbaum spoke about how many people are responsible for making Safe Foods a success. He invited three of his friends, co-workers, and family members to stage: Rush Deacon, former CEO of Safe Foods, Curtis Coleman, founding president and CEO of Safe Foods, and Chris Coleman, current CEO and president of Safe Foods. He presented each of them with a gavel and thanked them for their hard work and service.

“It’s interesting how God works in your life,” Rosenbaum said. “Years ago, God gave me the ability to sell. I found out that in life you come across friends, and friends are what help you. This day, Safe Foods touched 300 million meals in the world. One out of 10 venture capital companies doesn’t make it, and I know why. It’s pretty tough. At age 86, you think about a lot of things. One of the things you think about is that you aren’t much longer on this Earth. You also think about your friends, and you also think about how God has led you in your life. God has always been faithful to Safe Foods.”

Dr. Lawrence Whitman, dean of the Donaghey College of Science, Technology, Engineering, and Mathematics, said that Fribourgh events have raised more than half a million dollars for scholarships since they started in 2010 and that 30 students have received scholarships from the proceeds.

“These scholarships are providing our students with the opportunity to get a great education and make a positive impact in the community,” Whitman said. “One of our scholarship recipients is a nontraditional student who has chosen to become an educator and will soon start teaching physics at a community college in Arkansas. This is just one example of the impact of your generous gifts at work. Your support of our students impacts their lives, impacts your lives, and impacts our community.

Another Fribourgh scholarship recipient, Nabeel Alwan, graduated from UA Little Rock in May with two bachelor’s degrees in chemistry and biology. He is now applying to medical schools and plans to practice internal medicine or general surgery.

“This scholarship has meant a lot to me,” Alwan said. “It gave me a push forward and the motivation to pursue my goals. It also gave me time to focus on research, and I was able to get published as an undergrad student for my research on combination therapies for cancer treatment. Growing up, my community was underdeveloped in having access to medicine care, and I want to help change that as a doctor.”