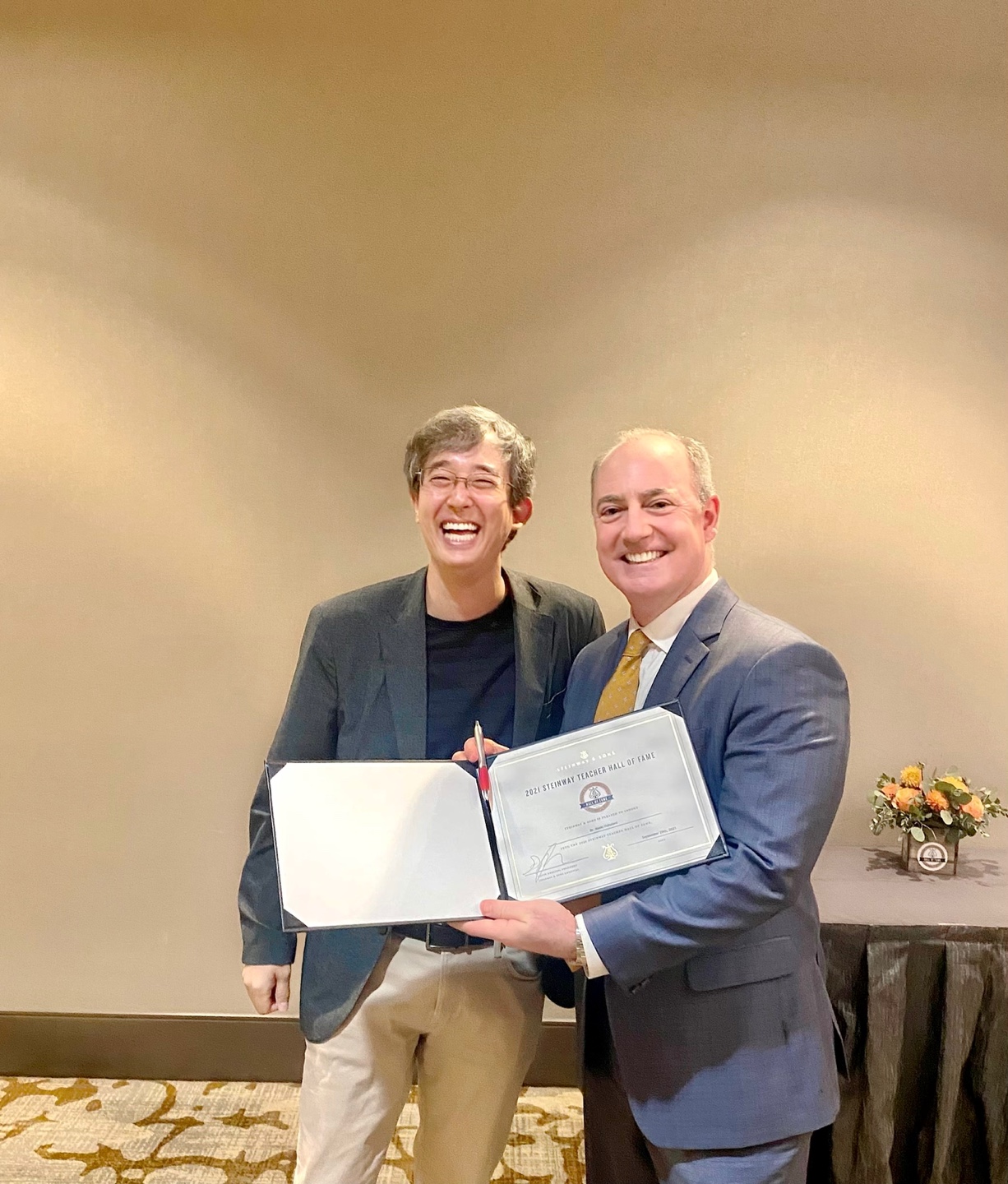 Dr. Naoki Hakutani, an associate professor of piano at UA Little Rock, has been inducted into the Steinway & Sons Teacher Hall of Fame.

Hakutani is one of 44 teachers from the United States and Canada who were inducted into the Steinway & Sons Teachers Hall of Fame on Sept. 29 during a special event hosted at the Steinway Factory in New York City.

“This was a real honor for me,” Hakutani said. “There are a lot of deserving people from this state, and I was honored to be chosen to represent Arkansas in the Steinway & Sons Teacher Hall of Fame. This group is a mix of professors, private teachers, concert pianists, and music education professionals. I felt very honored to be included in this remarkable group.”

Joining the Steinway & Sons Teacher Hall of Fame is a prestigious designation recognizing the work of North America’s most committed and passionate piano educators. This year marks the second class of honorees, following the Hall of Fame’s inaugural class in 2019.

“Music education has been a cornerstone of our historic company since the late 1800s,  and today is no different,” said Gavin English, president of Steinway & Sons Americas. “We are very proud to work with the talented music educators inducted this fall into the Steinway & Sons Teacher Hall of Fame. These teachers foster passion, creativity, and discipline in the next generation of piano artists. Their work deserves the highest praise.”

Each teacher inducted into the Hall of Fame was nominated by a Steinway & Sons showroom in the teacher’s home region. Stephen Wirges, owner of Steinway Piano Gallery in Little Rock, nominated Hakutani for his dedication to his students.

“The real purpose of nominating someone for the Steinway Hall of Fame is finding a teacher that has dedicated their life to the excellence of their students, and the first person who came to mind was Naoki,” Wirges said. “Steinway represents excellence, and I see that Naoki represents excellence with his students. It’s important to Naoki that his students are playing on an instrument that will help them get the best of their talent.”

Both Hakutani and Wirges traveled to the Steinway Factory in Queens, New York, for a banquet and special tour of the factory. The teachers’ names are now displayed on a commemorative display wall inside the iconic factory.

“When Steinway said I got to nominate a teacher for the Hall of Fame, I know Naoki lives and breathes piano,” Wirges said. “I know I work 12 hours a day on pianos, and Naoki has that same attitude toward his students. He sometimes calls me late at night from Stella Boyle Smith Concert Hall trying to make sure a piano is ready for the student’s performance the next day. Teachers are everything. It’s important to us that they are bringing up the next generation of music lovers.”

Among his students, Hakutani is known for his personal but rigorous style of teaching. He is praised for his work with students in his studio both at UA Little Rock and his home. A 2016 recipient of the Arkansas Music Teacher Association Teacher of the Year Award, Hakutani has been described as the most sought out private piano instructor in the central Arkansas region.

“My philosophy in teaching piano is when I meet a student for the first time, I’m not trying to change everything about them,” Hakutani said. “I’m trying to bring out the best of what they have and make them realize their potential. I’m always aware that people are musically different, and it is the job of a teacher to find out what works for them the best.”

“I have a variety of music students,” Hakutani said. “I teach as young as 5 and as old as 100. Most of my work happens at UA Little Rock, but being active in the community keeps me engaged with all kinds of pianists. The world of piano is not one size fits all. There are all kinds of people who play the piano, and somehow it’s an instrument for everyone.”

In the upper right photo, Gavin English, president of Steinway and Sons, presents Naoki Hakutani with his certificate.