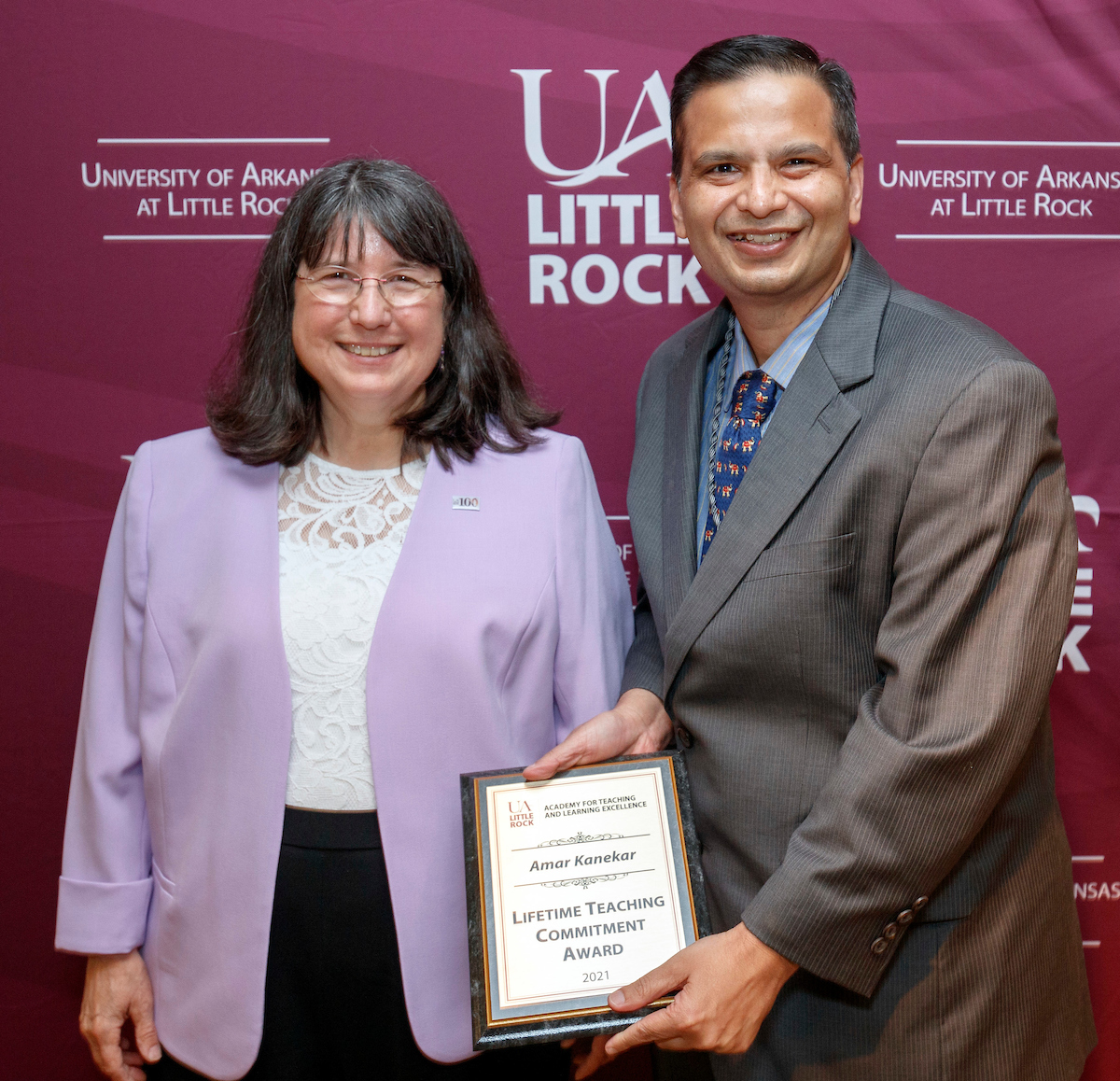 Dr. Amar Kanekar, associate professor and graduate coordinator of the Health Education/Health Promotion program, is so dedicated to professional development that UA Little Rock’s Academy of Teaching and Learning Excellence (ATLE) has created a new award to recognize his achievements.

During the Faculty Excellence Awards Ceremony, Kanekar received ATLE’s Lifetime Teaching Commitment Award. Kanekar is the first and only recipient of the award, which was created because he has now earned more than 2,000 points from ATLE. This represents the most points any person has earned in ATLE’s history.

“The award was created specifically because Amar received 2,000 points, and the ATLE team felt that his work needed to be recognized,” said Dr. René Shroat-Lewis, a co-director of ATLE. “We currently have 572 people that have been to ATLE events, and no one has ever earned more points than Amar. His award is quite an accomplishment and is testimony to his commitment to teaching excellence.”

To put those points in comparison, Dr. Laura Barrio-Vilar, a co-director of ATLE, is the person who has earned the second highest number of points from ATLE. Her score stands at 1,173, more than 800 points away from Kanekar.

“I feel greatly excited and honored for this award from ATLE,” Kanekar said. “I am also indebted to them for creating an award to keep up with my involvement.”

Having been involved with ATLE for the past decade, Kanekar served as a co-director from 2017 to 2020, where he learned a great deal about best practices in teaching and assessment.

“I believe as long as a person is involved in any of the aspects of teaching, it’s vital to be involved in teaching professional development such that one learns best practices, teaching techniques, use of technology tools, and so on throughout one’s tenure as a teaching faculty,” Kanekar said. “It’s very important to keep oneself current, growing and learning. I am a firm believer and practitioner of growth mindset.”

Participants earn 10 points for attending an ATLE professional development event. Since Kanekar has attended hundreds of events, he’s found it difficult to pick a favorite, although he has enjoyed the lunch-and-learn sessions, the Monday Morning Mentor sessions, and guest speaker sessions.

“All these sessions have provided me with a wholesome and well-rounded perspective into teaching, instruction, assessment, and student issues,” he said. “I have learnt so much from each and every session I have attended. I think all the sessions add to one’s understanding of teaching and learning as applicable to higher education.”