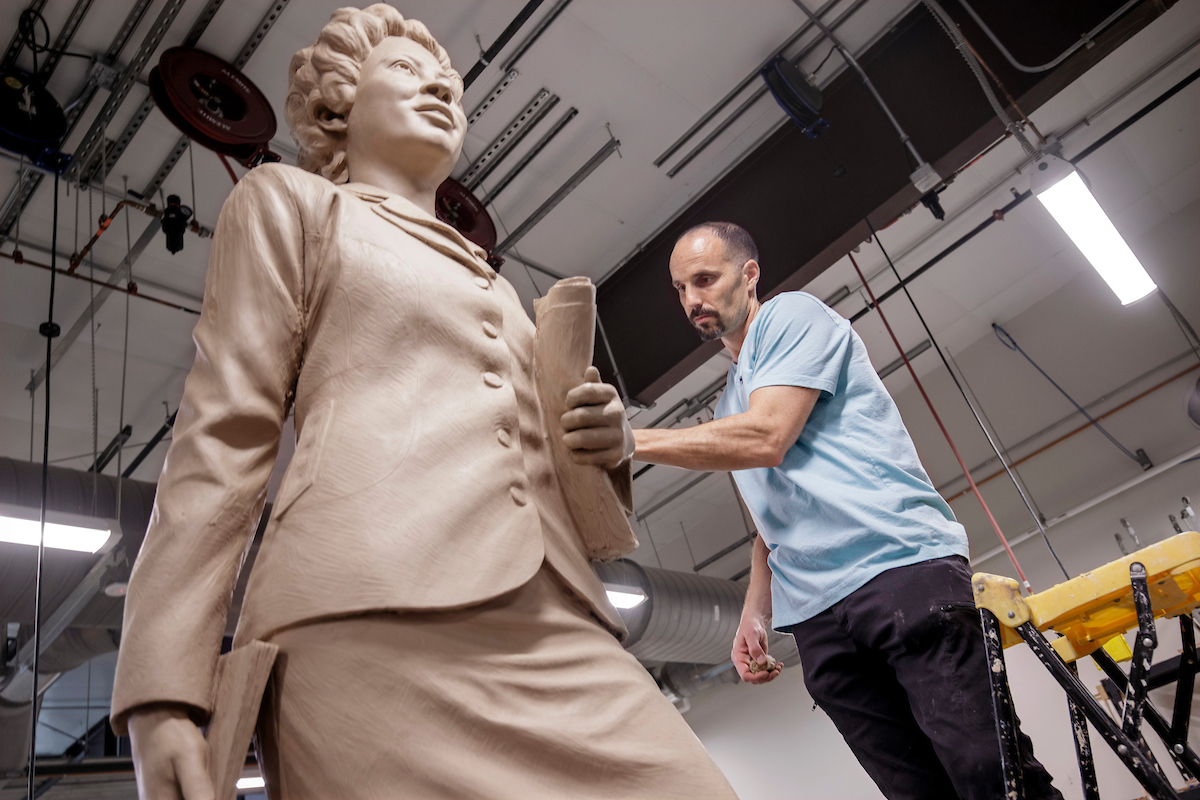 Benjamin Victor, the artist chosen to create a bronze statue of Daisy Bates for the U.S. Capitol, has been inspired by Bates for many years.

“It’s been such an honor,” he said. “When I read about her life and legacy and accomplishments, I know it will take the best of me in order to do justice to her spirit and legacy. I can’t imagine any person more worthy than Daisy Bates of being immortalized in Statuary Hall.”

Victor would know well since the Bates statue is the fourth statue he’s created for Statuary Hall. He was commissioned by the National Statuary Hall Steering Committee and the Arkansas Capitol Arts and Grounds Commission to create a 7-foot-6-inch bronze sculpture of Bates, a renowned civil rights activist.

Bates will be one of the first Black women to be featured in Statuary Hall. She and her husband, L.C. Bates, launched the Arkansas Weekly, an African American newspaper dedicated to the civil rights movement. It would become the largest Black-owned newspaper in Arkansas. Bates, who served as president of the Arkansas chapter of the National Association for the Advancement of Colored People (NAACP), is also famous for her role in organizing the desegregation of Little Rock Central High School by nine Black students in 1957.

The statue will show Bates in motion with one foot stepping forward, dressed in a business suit while holding a notebook and pen in her right hand and a newspaper in her left hand.

“I wanted to show her in motion walking because she was an activist,” Victor said. “She didn’t just stay in one place. She was in motion and action for her cause. I saw this beautiful photo of her holding the newspaper in her hand as she walks and leads a crowd behind her. I thought that was a perfect image. In her right hand, she is holding a notebook and pen to show that she is a journalist.”

Victor is working on the clay model from which the bronze statue will be cast. He traveled all the way from his home and studio in Boise, Idaho, to work on final details like sculpting Bates’ flower, NAACP pin, and her jewelry at the Windgate Center of Art and Design at UA Little Rock. The trip has given him the chance to learn more about Bates’ life.

“I got to walk through her home and the Daisy Bates Museum and Little Rock Central High School,” he said. “All of these experiences help with my experience. All the people who are most integral to the project can see the full-size clay statue before it’s cast in bronze and be a part of the process.”

Victor has also had the chance to meet with members of the public, art faculty and students, and people who knew Bates personally.

“So far, it’s been wonderful. I really loved the university’s facilities,” Victor said. “This is a beautiful facility, and it’s been great getting to know the people in the art department and spending time with people from the Daisy Bates Museum. That’s been irreplaceable. I think the heart of the statue lies with them. I’ve met people who knew Daisy Bates, and that’s been an irreplaceable part of the process.”

Janis Kearney, a former newspaper manager for Bates who also purchased Bates’ newspaper when she retired in 1988, said seeing the clay statue of Bates in person left her in awe.

“I’m also so very happy that she is being recognized by not only the state of Arkansas but the country for the leadership and service that she gave for this country,” she said. “This is a great day for Arkansas and the country.”

Kearney served as a consultant on the statue and provided newspaper articles, photos, and information to assist Victor with the creation of the statue.

“Daisy would have been so excited and so grateful and so humbled by it,” Kearney said. “She would have wished that her husband was alive to see it.”

Kevin Kresse, a UA Little Rock alumnus, has been commissioned to create a Johnny Cash statue that will also be placed in the U.S. Capitol. The Bates and Cash statues are expected to be dedicated in Washington, D.C. in December.

Arkansas PBS has been filming this week’s activities and will run an hour-long documentary on the selection, creation, and installation of the new statues in 2023. Additionally, Arkansas PBS will develop classroom-ready resources aligned with state and national academic standards for social studies and arts education for K-12 students to accompany the film.

When Victor returns to his home in Idaho, he will make the final touches on the clay statue, create molds, and then cast the bronze version of the statue that will lie in Statuary Hall.

“There are a number of things that stood out to me about Daisy Bates,” Victor said. “Her leadership was unmatched, and her energy and her positivity really spoke to me. She had an incredibly negative experience in life as a child when her mother was raped and murdered and her father had to leave. It must have been just horrible, and she described it in her book. She turned it into positive action for her people in the face of such negativity. She stood up for civil rights in the face of the worst negativity and treatment that we’ve ever seen. It all really inspires me as an artist.”