UA Little Rock Students Have Unforgettable Experience in the Bahamas 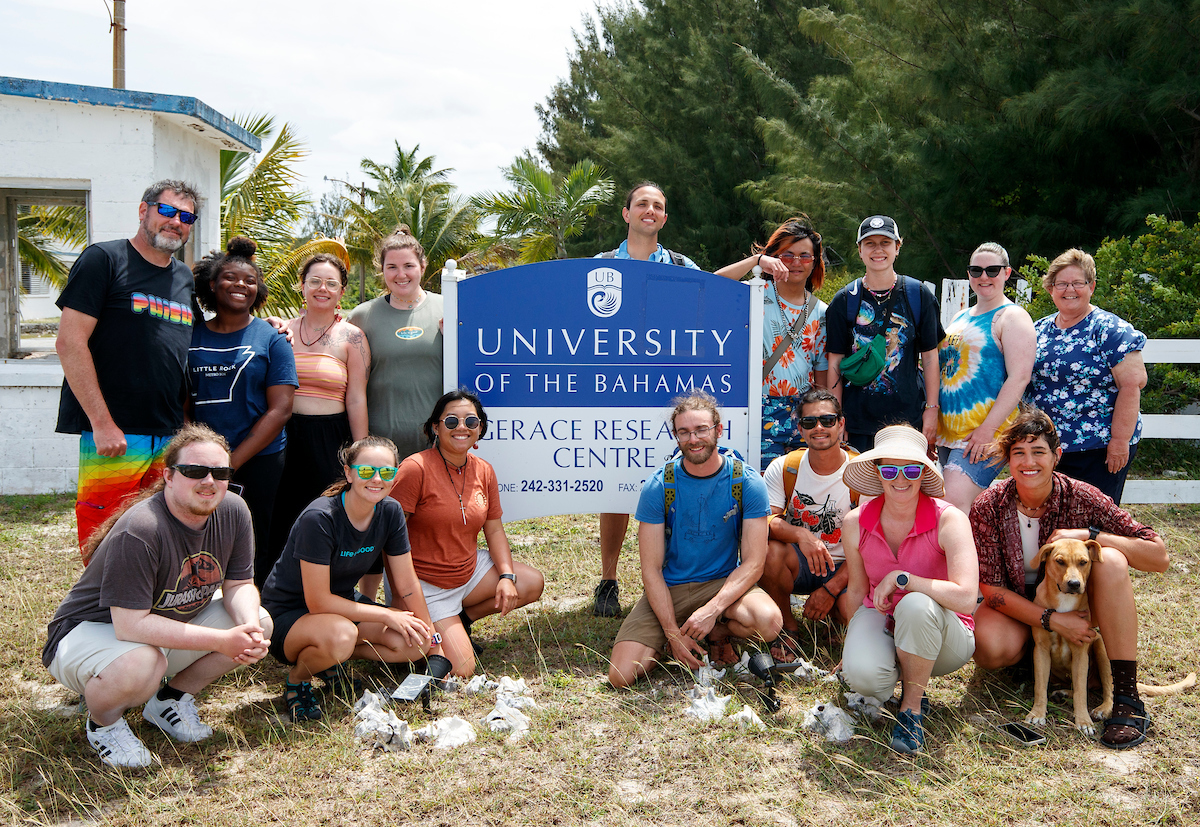 For UA Little Rock students Mailee Xiong and Bria Hampton, swimming to what’s ominously known as “The Wall” in the waters off San Salvador Island in the Bahamas was a once-in-a-lifetime experience that would not have been possible a year earlier.

The two students are part of a group of 13 UA Little Rock students who traveled to the Bahamas for a study abroad research trip during spring break week from March 18-27. Xiong and Hampton both learned how to swim just so they could go on the trip and participate in group swim to the wall, which is the point where the ocean floor suddenly drops from about 15 meters to 4,000 meters.

“When I saw a flier for the class, I thought it would be fun to spend a week with my friends in the Bahamas,” Xiong said. “I didn’t know how to swim, but I decided to go outside my comfort zone. For a few months, Mataya Duncan and Nina Barton taught me to swim. While we swam toward the wall, people gave me tips on when the waves were crashing down on me. This was also Bria and me’s first time on the beach, and it was my first time traveling internationally.”

“I enjoyed overcoming my fears,” Hampton agreed. “I had never swam before in my life. I had to take swimming lessons to go on this course. Seeing sharks and stingrays below me was freaking crazy, but it was worth it. I would recommend this trip to anyone who wants to be challenged, but also wants to see some cool things.”

Led by Earth Sciences professors Dr. Laura Ruhl-Whittle and Dr. René Shroat-Lewis, members of the Geology and Ecology of the Bahamas class conducted research on the small island that is home to less than 1,000 people, but is famously known as the first island where Christopher Columbus made landfall on Oct. 12, 1492.

The students toured the island’s many ecosystems and witnessed much wildlife, including sharks, sea turtles, and the critically endangered San Salvador rock iguana. The students kept field research journals that covered many of their field trips to explore the abundant life in the island’s coral reef, biodiversity in the forests, caves, and geology of the island.

“My favorite thing was swimming in the Lighthouse Cave (the largest cave on San Salvador),” Barton said. “We went up to the lighthouse, and it was the day we also saw the sea turtles. It was my biggest dream to swim with sea turtles in the wild. It was the best spring break trip ever.”

Fellow student Howard Orlina said the trip gave him the chance to participate in many incredible experiences while simultaneously overcoming some of his fears.

“My favorite part of the trip was facing so many of my fears,” Orlina said. “It’s terrifying snorkeling when you haven’t swum in years. I was terrified of swimming in the Lighthouse Cave, but it was amazing. At one point, I hiked all the way to the top of the island, and I had never done something like that before. When I was a kid, I would watch people on National Geographic doing stuff like this, and now I’ve done it.”

Days on the island are intense. Students had breakfast at 7:30 a.m. and are out in the field from 8:30 a.m. until they return for dinner at 5:30 p.m. The group meets in the classroom at 7 p.m. to go over field notes from the day and talk about the next day’s adventures.

Still, there are some fun and games for the students who keep themselves entertained with darts, board games, stargazing, and Bo, the friendly dog who lives at Gerace Research Centre, where the group stayed.

“I did check off a couple of things on my bucket list, which is good to do this early in life,” Jacob Earley said. “One was stargazing at such low lights. I live next to so many car dealerships that I can only see three stars in the sky each night. I got to eat from a freshly broken coconut. I got to see some sharks. I was crowned king of stromatolites because I gave a presentation on them.”

With COVID-19 interfering with the previously planned trip, the professors were eager to return to the island after being away for three years.

“What I really enjoyed was working with the students this year,” Ruhl-White said. “They were very enthusiastic and excited about everything we did from geology to going in caves to learning about the rock deposits. They were even enthusiastic about talking about the class work. They were a great group of students.”

Members of the Geology and Ecology of the Bahamas class will give a presentation, which is free and open to the public, about their trip at 1:45 p.m. May 2 in Fribourgh Hall 102.