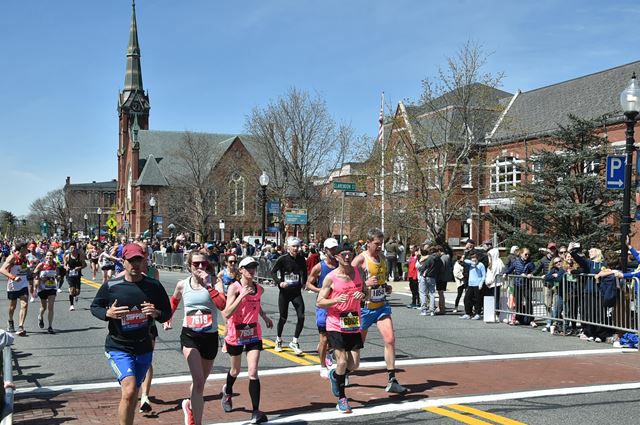 For many long-distance runners, competing in the elite Boston Marathon is the stuff of dreams. It was no different for UA Little Rock alum Margaret “Meg” Berry, who ran the Boston Marathon April 18.

“It was an experience that I will never forget,” Berry said. “If you are going to run a marathon, Boston is the one to do.”

Unlike most of the 30,000 runners who ran the race, Berry completed the Boston Marathon with a smaller group of approximately 300 people who ran in the marathon’s Adaptive Program for Runners. Presented by the Doug Flutie Jr. Foundation for Autism, the program provides support for athletes with visual, physical, or intellectual impairments to take part in the Boston Marathon.

Born three months premature, Berry is blind in her right eye. Runners with a visual impairment can apply to race the adaptive program of the Boston Marathon if they have previously completed a marathon with a time of under five hours. Berry did so with a time of 4:41:03 at the Louisiana Marathon in 2020. She hopefully applied and waited for her chance at the Boston Marathon.

“I still can’t believe I was accepted,” Berry said. “It’s still surreal that I got to run in the Boston Marathon. I had to choose my own guide runner. My friend, Chris Shuptrine, has run some marathons with me. Marathons are hard, but the whole atmosphere was incredible.”

Adaptive program runners begin the marathon after the elite men and women but before the general runners.

“We got up to the start line, and I was like, ‘Oh my gosh, I can’t believe we are at the Boston Marathon,” Berry said. “There were crowds on either side, and it was incredible. Eventually, the largest wave of runners came after it. We had to move to the right side, so we didn’t get run over. Chris made sure I didn’t trip over anyone for a few miles as 30,000 runners passed us.”

Berry said the most incredible part of the experience was the support she received from crowds of fans who lined the streets to watch the marathon as well as her fellow racers.

“The spectators out there were incredible,” Berry said. “There is one section where we go right past Wellesley College, an all-girls school. They call it the scream tunnel. You’ve got all these girls screaming at you and giving you high fives. We could hear the screams before we even got there. That was pretty cool. We had so many runners who passed and told us we were their heroes. We had the support of so many runners that it was incredible.”

Berry said that she and Shuptrine encountered some tough obstacles to finishing the race. They both encountered stomach problems throughout the race. Starting at mile 17, the course took on rolling hills that made the final miles tough.

“I’m grateful to God and to Chris for being willing to go to Boston with me,” Berry said. “We helped each other through the later miles. You end the race in Boston, and the crowds are amazing. It was so loud that Chris said his ears were ringing. At that point, you are just tired and want to stop. The crowds are what kept me going. I owe so much to Chris. I couldn’t have done this without him.”

With her time of 4:50:47, Berry has qualified to run in next year’s Boston Marathon and plans to apply for the race. The time came as a surprise to Berry, who feared that she wouldn’t complete the race in under five hours due to injuries she’s had over the past two years that has interfered with her running.

“I never thought I would have another marathon under five hours, and I am just overjoyed and surprised,” she said. “I injured my hip and hamstrings back in 2020, and it really put a stop to my running. 2020 and 2021 were tough so I am so grateful to be doing better now and able to run again!

To prepare for the marathon, Berry follows Hal Higdon’s marathon training schedule, which culminates with a 20-mile run a few weeks before the marathon.

“Chris and his wife Anita surprised me on the day I was doing my 20 miler,” Berry said. “They secretly got my friends together, and they all made signs along the route. There were also people who came out to run with us. It’s tough doing 20 miles by yourself. That was a good day.”

A 2012 graduate of UA Little Rock’s Master of Social Work program, Berry spent nine years working at the Arkansas School for the Blind and Visually Impaired. This year, she began work as a social worker/therapist at Arkansas Children’s Hospital.

“I work with adolescents with eating disorders,” she said. “I love working here. It’s an amazing place to be.”

In 2016, Berry started running by completing a training program with the Women Run Arkansas group. During the 10-week program, runners trained and competed in their first 5k races.

“I loved it, and I started signing up for more races,” Berry said. “Eventually, I progressed to marathons. I’ve done 18 marathons so far, including Boston. I can’t imagine my life without running and all the amazing people I’ve met within our running community. I am so grateful to running for bringing such wonderful friends into my life.”

Berry, who will turn 40 on May 7, said she will celebrate her milestone birthday with a 4-mile run. For her next marathon, she will travel to New York to compete in the New York City Marathon on Sunday, Nov. 6. Meanwhile, she’s thankful for the newfound strength and friends that running has brought to her life.

“Running has really changed my life with the people it’s brought into my life and the overall confidence it’s given me that I can persevere,” Berry said. “I guess I’m stronger than I think I am. Running a marathon is all about perseverance and making it through the pain and the fatigue. It’s all about your strength. It’s really shown me that I am capable of more than I thought I was.”