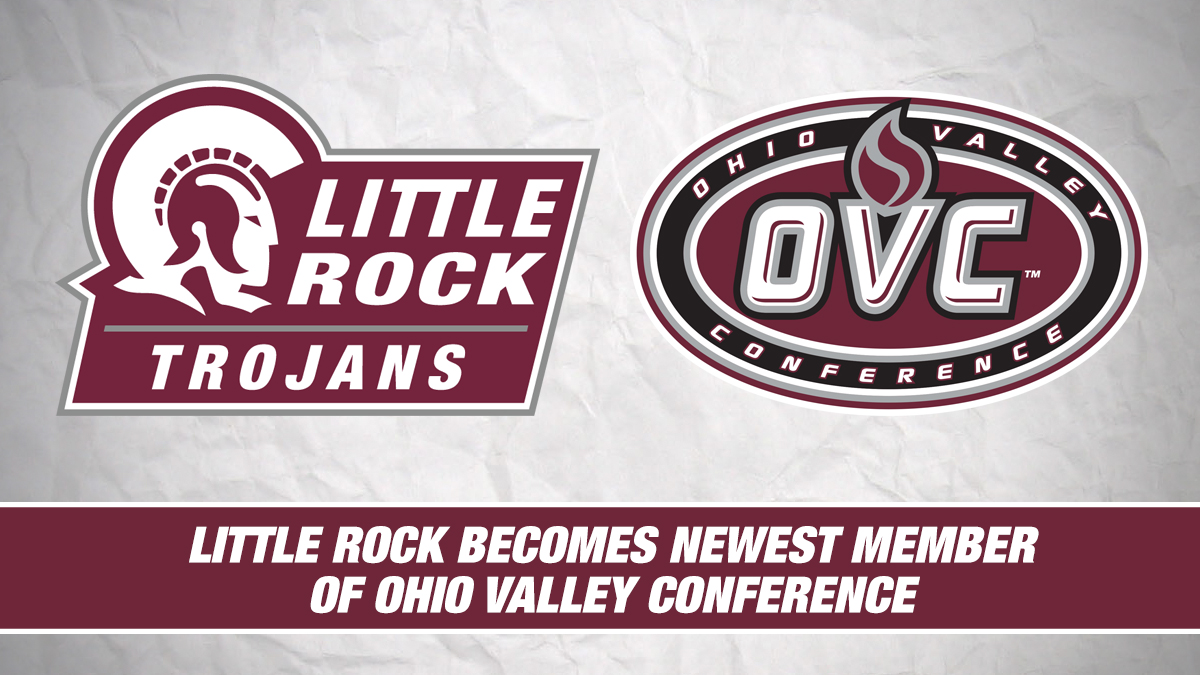 The Little Rock Trojans and University of Arkansas at Little Rock have joined the Ohio Valley Conference, a transition that officially took place as the clock rolled over to midnight on July 1, 2022.

The move to the Ohio Valley Conference provides a new conference affiliation for 13 of Little Rock’s 15 intercollegiate athletic programs. The new membership was officially announced last December in a press conference at the Jack Stephens Center. Little Rock officially joined the league Friday alongside Lindenwood and Southern Indiana.

“In accepting the Ohio Valley Conference invitation, we begin a new and exciting chapter for UA Little Rock and Trojan Athletics that better aligns our sports portfolio with available conference resources and reaffirms our commitment to athletic and academic excellence,” said UA Little Rock Chancellor Christina Drale in that December press conference.

“I am very excited that the day is finally here, and we are now proud members of the Ohio Valley Conference,” said Director of Athletics George Lee. “In doing our research on the Ohio Valley Conference, the history and tradition of the league made it an enticing new conference home for our Trojan athletic programs as we look forward to adding our mark to the history of the OVC this year as the league celebrates a milestone anniversary and for years to come.”Little Rock becomes the league’s 10th institution, joining Eastern Illinois, Lindenwood, Morehead State, Southeast Missouri State, SIU Edwardsville, Southern Indiana, Tennessee State, Tennessee Tech and UT Martin. As the nation’s eighth-oldest NCAA Division I conference, the OVC is celebrating its 75th anniversary this year. The additions of Little Rock, Lindenwood and Southern Indiana mark just the 22nd, 23rd and 24th additions to the league over its 74-year history.

The move to the Ohio Valley Conference will bring about more regional rivalries and a better experience for the Trojan student-athletes as all but one member of the OVC is located less than 500 miles from Little Rock’s campus. This will mean reduced travel time for student-athletes, less time missed from class, lower travel expenses for the entire athletic department and more opportunities for alumni, donors and fans to attend road conference games.

Since making the jump to Division I, Little Rock’s athletic programs have combined for 51 conference championships, including a combined 21 for men’s and women’s basketball, with 42 NCAA postseason appearances by Trojan athletic programs. In the last seven seasons, Little Rock athletic teams have combined to make 12 NCAA postseason appearances, most recently being represented by men’s golf and men’s track and field in 2022.

Additionally, Little Rock’s athletic programs have excelled in the classroom with the department boasting a cumulative GPA of 3.358 through the spring 2022 semester. The Trojans have produced 12 Academic All-Americans since 2000 with seven Trojan athletic programs receiving academic recognition by their respective governing organizations since 2020-21.

“The OVC is delighted to add Little Rock to its membership, given its history of competitive success and its commitment to student-athletes,”  OVC Commissioner Beth DeBauche said at the December press conference. “As we discussed the process of membership, there was an immediate acknowledgment that the values of our conference and their institution align. Our intention is to create a long-lasting partnership that will enhance the student-athlete experience and strengthen the competitive success of the entire OVC.”

The Ohio Valley Conference, which celebrates its 75th anniversary in 2022-23, was founded in 1948, making it the eighth-oldest Division I athletic conference. Over the years OVC teams have garnered national championships in football along with national team or individual titles in the sports of rifle, cross country, track and golf.  In the 1950s the OVC became a pioneer when Morehead State became one of the first non-traditionally Black mid-southern institutions to accept an African-American student. Soon after the passing of Title IX legislation, the OVC began formulating plans for women’s athletics, which began in 1977. The OVC has long been a national leader in sportsmanship and in 1995 implemented a first-of-its-kind Sportsmanship Statement, a policy that promotes principles of fair play, ethical conduct and respect for one’s opponent. The OVC has a multi-year media rights agreement with ESPN as well as a sponsorship agreement with LEARFIELD.