On this day in of Osage country, Marjorie Louis Tallchief was born.

World renowned ballerina Marjorie Louis Tallchief was born in the middle of a family vacation to Denver, Colorado. At the time, the Tallchiefs resided in Fairfax, Oklahoma, where Marjorie would spend the early part of her childhood alongside her brother Gerald Tallchief, and her sister, Maria Tallchief, who would also become a world renowned ballerina. At the age of three, Ruth Porter Tall Chief, the girls’ mother, placed Marjorie and Maria in ballet lessons. A few years later their family moved to Los Angeles, California, where the girls continued their ballet instruction under prominent names of the ballet world, including “Ernest Belcher, Bronislava Nijinska, and David Linchine” (Short).

Marjorie Tallchief launched her professional career as a soloist in Lucia Chase and Richard Pleasant’s Ballet Theater in Montreal, Canada, on September 26, 1944. From there Tallchief was invited to join the Ballet Russe de Monte Carlo, where her sister danced at the time, but she declined. Instead Tallchief signed a contract with impresario Sol Hurok, and joined the American Ballet Theater. Tallchief completed her first year’s contract with the Ballet Theater and signed a second. However, before she was able to complete her second year, Hurok, who resigned his position at the Ballet Theater, once again contacted her with an “undeniable” offer; he offered Tallchief the position of leading soloist in the Colonel de Basil’s Original Ballet Russe (Livingston, 177). It was during her time with Ballet Russe that Marjorie would meet and dance with her future husband, George Skibine. As time went on, the relationship between Sol Hurok and Colonel de Basil fell apart and the couple had to make the difficult decision to stay in America or join the Nouveau Ballet de Monte Carlo in Europe. Against her family’s preference, Tallchief and Skibine decided to join the Nouveau Ballet de Monte Carlo, later renamed the Grand Ballet du Marquis de Cuevas, where they believed they would stay for a season. That season quickly turned into nearly two decades.

While in Europe, Marquis George de Cuevas, the head of the Nouveau Ballet de Monte Carlo, allowed Skibine to choreograph his first ballet Tragedy in Verona.  The ballet proved to be very successful and Skibine continued to choreograph several others, many of which he and Marjorie danced together in lead roles. It was also during her time in Europe that Marjorie gave birth to her twin boys Alex and George. Although her career life and family life were both equally as busy, it is said that Marjorie, “experienced minimal difficulties balancing the demands” of both lives (Livingston, 192). In 1956, Marjorie took part in a “commemorate performance in London’s Stoll Theater honoring Anna Pavlova,” and just a few months later was invited to join the Paris Opera Ballet (Livingston, 192). Marjorie became the first American premiere danseuse etoile at the Paris Opera Ballet and stayed with the company until 1962.  Marjorie later went on to join Chicago Opera Ballet and the Harkness Ballet in New York before retiring in 1966.

Marjorie Tallchief’s career is often times remembered through her most famous roles, including her roles in Annabel Lee (1951), Romeo and Juliet (1955), Camille (1958), Pastorale (1961), and Ariadne (1965). After retirement, Tallchief served as an instructor at the Dallas Civic Ballet and director of dance at the Harid Conservatory in Boca Raton, Florida. She also assisted her sister, Maria, establish the Chicago City Ballet. Furthermore, in 1991, Tallchief was inducted into the Oklahoma Hall of Fame.

Both Marjorie and Maria are depicted in the Flight of Spirit mural located in the rotunda of the Oklahoma State Capital building and also in the Five Moons statues found in the Vintage Garden of the Tulsa Historical Society. As of April 2018, Marjorie Tallchief continues to live on at the age of 92. 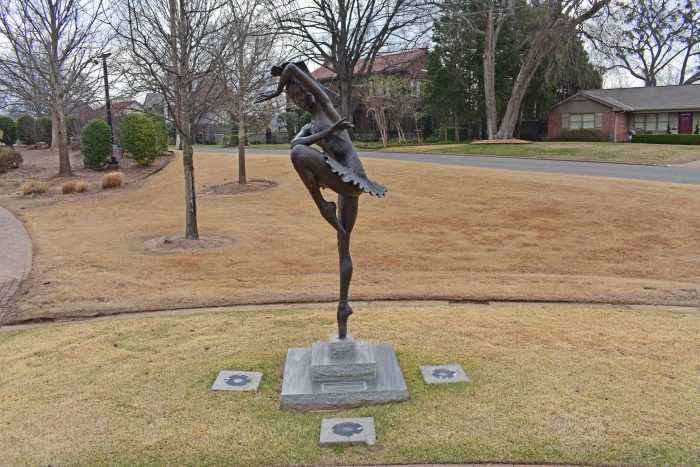