Consent is Not Just Sexy, it’s Mandatory: A Primer on Consent 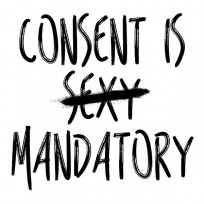 There are several PSAs and programs that proudly claim that “consent is sexy!”. That may be true, but it is not just “sexy”, it’s the law, and not obtaining consent for a sexual act is illegal.
In the time it took to write this blog post (about an hour), 78 women have been raped (statistic provided from https://acasa.us/statistics). 78 women, sisters, girlfriends, daughters. But what exactly is rape?

The legal definition of rape in Arkansas states:

(A) A person commits rape if he engages in sexual intercourse or deviate sexual activity with another person:

Basically, rape is sex without consent. Which leads to the critical question of what is consent, and when is it required.

Consent is when your sexual partner AGREES to a sexual act affirmatively, that consent is freely given, and the partner has the capacity to agree.

There are multiple ways of analyzing consent.

There are three main ways of analyzing consent when referring to sexual acts. The three main questions to ask if is there is affirmative consent, was it freely given consent, and was there capacity to consent.

Affirmative consent: This is an expression of consent. The person will expressly say that they want the sexual act to occur. A few questions to consider are if the person expressed words indicating agreement for sexual acts? For example: Yes, I want this. Yes, I like this. Yes, go on. This is a green light, and consent. It is NOT consent if the person says certain terms such as “I don’t know”, “Can we stop”, or “NO”. Typically, any expression with “NO” or any uncertainty is NOT a green light, and NOT consent.

Freely given consent: The second question to ask is whether the consent was freely given. Was the consent offered of the person’s own free will, without being induced by fraud, coercion, violence, or threat of violence? If they were forced to agree because they were scared, or threatened that is not consent.

There is a lack of consent if a person engages in a sexual act with another person by forcible compulsion or with a person who is incapable of consent because he or she is physically helpless, mentally defective or mentally incapacitated. Arkansas Code §§ 5-14-103; 5-14-125.

“Mentally defective” means that a person suffers from a mental disease or defect that renders the person: incapable of understanding the nature and consequences of a sexual act; or unaware a sexual act is occurring.

“Mentally incapacitated” means that a person is temporarily incapable of appreciating or controlling the person’s conduct as a result of the influence of a controlled or intoxicating substance: administered to the person without the person’s consent; or that renders the person unaware a sexual act is occurring.

This might be the most confusing topic in regards to consent.

It is possible that sex can be consensual when two people have been drinking. There are people who drink, and even get drunk, and still consent to sex. But the issue is that after someone has consumed alcohol, it is much harder to convey consent to the other person, and it hard to determine if the other party has consented. Alcohol can inhibit clear communication, and also increase aggressiveness, both problems that can lead to sexual assault. The best option is to continue to check in with the other party, and keep making sure that they want the sexual acts to continue.

So how much do you need to drink to be unable to consent?

Arkansas has a law stating that a person cannot consent to sex if they are incapacitated by drugs or alcohol. But how “incapacitation” is defined is open to interpretation. While having sex with a passed out person is definitely not consensual, that should not be the only measure of consent. There are more things to consider than just consciousness. For example, a responsible partner would be asking themselves if the person can communicate clearly, are they coherent? Could they drive right now? Are they sober enough to be aware of what is happening? If the answer is no to any of these questions, then it is safe to assume the other person is too incapacitated to legally consent to sex. If there is any doubt, or mixed messages- don’t do it.

What if your partner said they did not want to have sex while they were sober, but changed their mind after drinking? Although there is no clear law, it is still best to tread carefully, and when in doubt, wait until the other person is fully sober, and then check in again. A few good things to consider are how much alcohol has this person had since you last asked them if they wanted to engage in sexual activity? Has this person indicated that they would want to have sex when they were sober? Even if they did say yes while sober, it is still good to keep asking. Also, another good question to consider is if you have been intoxicated with this person before. If you have, are they usually able to make lucid decisions? It does not necessarily mean they are sober enough to consent, but might give some more context to how intoxicated they are at the moment. On the other hand, if you have never drank with this person before, it is a good idea to be cautious, and continue to ask, and wait until you get a clear, affirmative consent.

In conclusion, if one person, or both parties are drinking it is a good idea to ask before, during, after, and continue checking in during any sexual activity. Check in during any change of activity, check in if you stop and start again, just keep asking. If there is any confusion, do not take the mixed signals as consent. If you have not been sexually active with this person before, or have not been intoxicated with this person before, a good rule of thumb is to NOT mix the two for the first time. Be comfortable with what they are like when they are intoxicated, or be familiar with what they are okay with first, before trying to mix alcohol and sex.

“Physically helpless” means that a person is: unconscious; physically unable to communicate a lack of consent; or rendered unaware that a sexual act is occurring. Arkansas Code §§ 5-14-101.

In short, consent is ALWAYS required. If you are not sure if the act was consensual, that is a good indication that it was not.