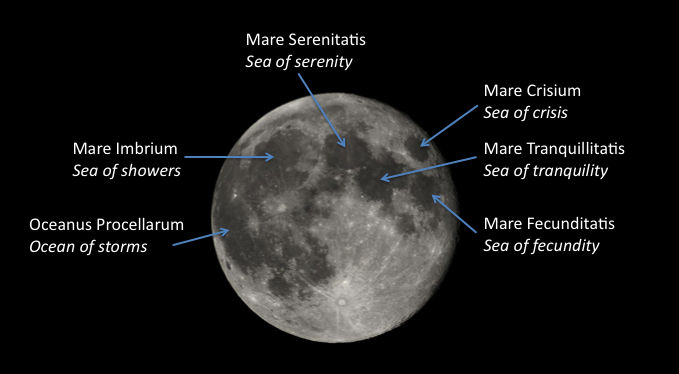 For the backyard astronomer, no other celestial object can offer as much beauty, complexity, and sheer wonder than does our closest neighbor in space, the moon. One could easily spend years, if not a lifetime, studying its battered and scarred landscape with just a small telescope. Observing time devoted to exploring the lunar surface in detail is time well spent. Just ask any seasoned stargazer.   But you don’t always need high powered optical aid to see cool features on the moon, you can see plenty with just your unaided eye or with a pair of binoculars you have laying around the house.

For example, those large, dark areas on the moon? Those are known as “maria” (“mare”, singular), or “seas” and are huge impact basins that formed around 3 to 3.5 billion years ago when giant asteroids slammed into the lunar surface and were then filled in with basaltic lava that oozed up from the moon’s interior. All told, there are over 20 of these impact basins but there are about 6 or 7 that you can easily see and learn the names of with just your unaided eye.

Of course, the moon’s surface is pitted with signs of millions of other, smaller impact craters. You need binoculars or a telescope to see most of them but there are a handful that stand out to the unaided eye and we are going to look in detail at one of the most prominent craters of all: Tycho. 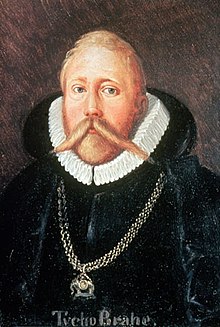 Tycho Crater, named in honor of the 16th century Danish astronomer, Tycho Brahe, can be found in the moon’s southern hemisphere, just south of Mare Nubium. It is a very bright feature with numerous, light-colored lines, or, “rays”, radiating out around it like spokes from the hub of a bicycle wheel. If you are observing through a telescope, keep in mind that while looking through a reflector and through a refractor or a Cassegrain telescope without a diagonal (an attachment that uses an angled prism or mirrors to avoid neck strain when looking through the eyepiece), that the image will be inverted. And yes, when observing in the southern hemisphere the moon will appear upside down from what you are used to seeing from here in the northern hemisphere, thus, Tycho, would appear in the moon’s northern hemisphere when viewed from below the equator.

The best time to observe Tycho is from two days before full moon to two days after. 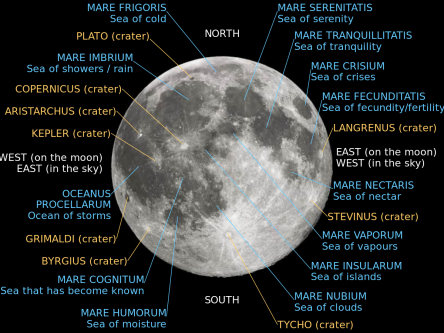 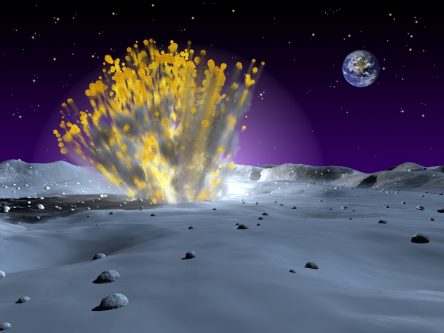 Did you know that, on average, the Earth is bombarded with about 36 tons of meteor material each and every day? It’s true! Fortunately for us, most of this stuff is no bigger than a grain of sand and burns up harmlessly as it slams into our atmosphere, occasionally seen as a “shooting star”.  We don’t know the impact rate of meteors on the moon but you can bet that it’s likely comparable to our own. But with the moon, there is no atmosphere to slow down these “meteoroids” and they do not burn up before hitting the ground, they just smack right into it.   Space rocks pummeling the moon are traveling incredibly fast, say, anywhere from 45,000 mph to 160,000 mph. How big of a crater that forms from such an impact depends on the velocity of the meteoroid and its mass. Given the speeds that we are talking about here, a 10-lb. space rock could gouge out a crater some 30 ft. across and hurl lunar material out across the moon’s surface in all directions and over great distances. 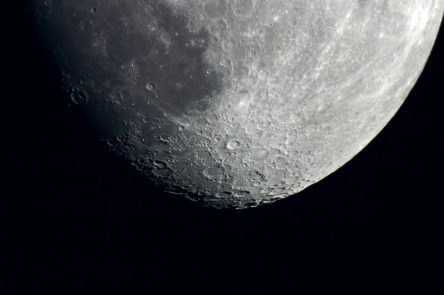 Tycho Crater is a classic example of what is known as a “complex crater”, a crater that has terraced walls, flat floors, a central mountain peak rising from the crater floor, and ejecta material fanning out around the impact site. Tycho is over 50 miles in diameter, 3 miles deep, and with a central peak that rises nearly 1.24 miles above the crater floor. All in all, an impressive hole in the ground. By comparison, Barringer Crater, just outside of Flagstaff, Arizona, is about 1 mile in diameter and 570 feet deep. It was formed some 50,000 years ago when an iron-nickel meteorite some 150 feet across impacted the ground, releasing the energy equivalent of 2.5 megatons of TNT. 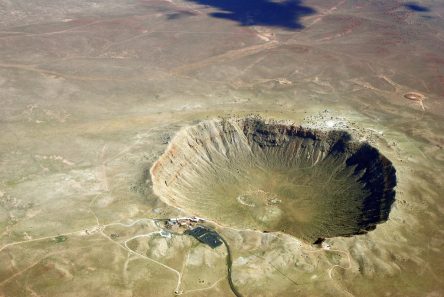 We don’t know the composition of the impactor that created Tycho Crater but, judging by the mess it made, the object was probably anywhere from 4 to 6 miles in diameter. Certainly something we would not want to crash into the Earth today!

Based upon radiometric dating from material collected by the Apollo 17 astronauts, it is estimated that Tycho was created some 109 million years ago (that’s young by lunar crater standards) and that the explosion required to create the crater must have yielded the equivalent of 30 trillion tons of TNT (that would be like 2 million Hiroshima bombs going off simultaneously). Jiminy Crickets! Dinosaurs living on the Earth at the time may have noted that bright explosion upon the moon 109 million years ago, and some of them no doubt noticed the fragments that likely pelted the Earth for days and nights afterwards. Had they the mental capacity, they may have thought, “Jeez, I guess we should get that space program going before it’s too late!”

At the moment the impactor slammed into the lunar surface, the kinetic energy (the energy a body has by virtue of it being in motion) derived from both its speed and its mass, got flash converted into heat energy and that would have then liquefied the lunar material at the impact site. Molten rock sprayed out towards the northwest, east, and southwest to create Tycho’s splendid ejecta rays. The fact that the rays are not splayed out in all direction tells us that the impactor came in at an oblique angle from the west. The most extensive of these rays is over 930 miles long. 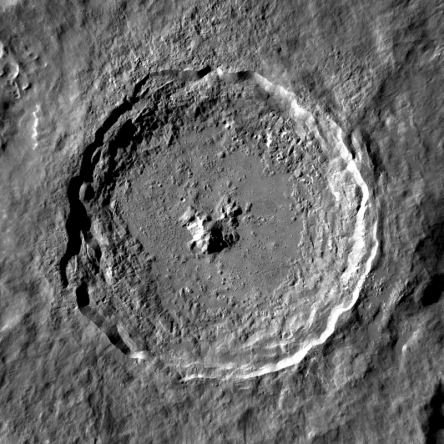 In the middle of the crater floor is Tycho’s 1.24-mile-high central peak. This lunar mountain literally formed in minutes of the impact. Yep, minutes. You’ve seen how this occurred many times before. Have you ever seen slow motion video of a drop of water or a pebble hitting the surface of a pond? When that pebble or water droplet hits the surface, it creates a temporary “crater” in the water. Liquid gets displaced all around, creating the impact crater. Then what happens? It suddenly fills back in and we see a rebound effect where a central column of liquid then shoots back up into the air. Now apply this on a much larger scale and rather than water, use molten rock.   That column of melted rock will suddenly cool to form the central peak that we see in many large lunar craters. A few of which can be seen with a small backyard telescope, including Tycho’s. 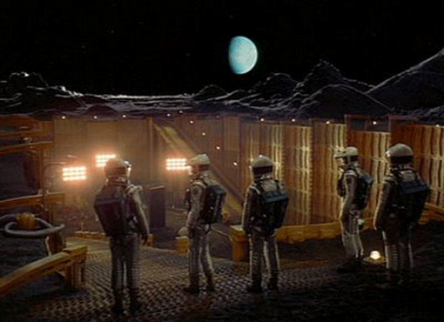 Science fiction fans will recall that author Arthur C. Clarke and filmmaker Stanley Kubrick made Tycho Crater the site for where the unseen aliens that feature in both the novel and film, “2001: A Space Odyssey”, placed one of several enigmatic monoliths in our solar system. The lunar based monolith is designated: TMA-1 (Tycho Magnetic Anomaly 1).

If I’ve piqued (or, peaked? Haha!) your curiosity and you would like to start observing the moon on a regular basis, allow me to suggest a few resources for you.

What’s Hot On The Moon Tonight? The Ultimate Guide To Lunar Observing by Andrew Planck 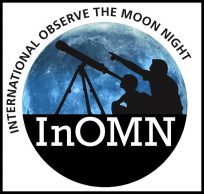 Don’t forget that on the 27th of October, 2017, the Central Arkansas Astronomical Society, The Arkansas Innovation Hub, and the UALR Physics and Astronomy Department will be celebrating International Observe the Moon Night at The Arkansas Innovation Hub, 201 E. Broadway, in NLR from 7:00 P.M. to 9:30 P.M. (with a backup date on the 28th in the event of clouds or rain). Come out and see the moon through telescopes, enjoy some goodies from food trucks, and learn more about our neighbor in space.